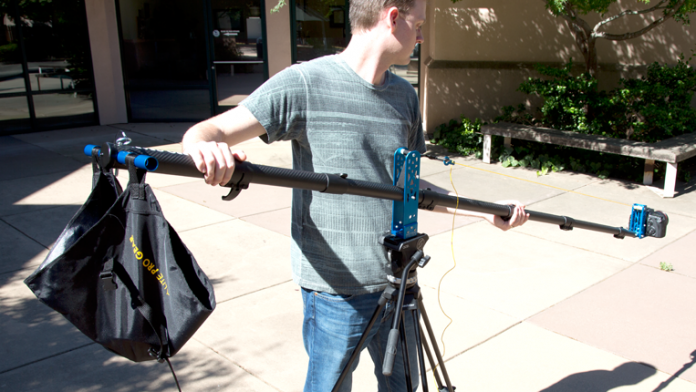 How many times have you reached the top of the mountain after a long and arduous climb, gazed out over the gorgeous view and wished you could have brought along a dolly or jib arm — something more than a light tripod — to help you capture fully the awesomeness laid out before you?

Well now you can, with the Feather Camera Crane. With its 10-foot telescoping, carbon fiber boom — 7-foot from the tripod pivot point and collapsible down to a mere 28-inches — and machined aluminum components, balanced with whatever materials nature provides, and weighing less than four pounds, the Feather Camera Crane is the epitome of lightweight portability, ease of use and practical functionality.

The boom and camera head assembly arrived neatly packed into a zippered soft case made of 5mm stretch Neoprene with a nylon strap handle. The second package, the Rock Bag, consists of highly durable ripstop nylon and may be filled with, well, rocks, or whatever happens to be around to balance the rig. Devoid of rocks, the Rock Bag’s several compartments are used to store the tower, the optional extension plate, the jib control handle, spare 1/4-20-inch and 3/8-16-inch mounting screws, two spare rubber plugs, an allen wrench for tightening stuff and making various adjustments, a user’s guide and several cool decals. Fold the flap over to lock everything in, roll the bag into a nice compact, portable form and secure with the attached buckle and strap.

The assembly process is fairly straightforward, and once you’ve done it a couple of times, subsequent assemblies will be quick and easy.

Remove the two rearmost tubes completely to slide the extended boom arm into the tower, lining up the holes in the side of the arm with the corresponding holes in the tower. Pushing the quick release pin through these holes creates a pivot point for raising and lowering the boom arm.

Releasing the rearmost latch allows you to slide the tube back until the jib control handle can be pushed through the large holes at the rear of the boom arm.

You can then unwrap the Control Cable from the camera head and attach its aluminum loop to the tower’s Black Diamond mini-carabiner. The Control Cable is a Petzl airline cord covered with a high strength synthetic fiber which gives it a high degree of abrasion resistance. The Control Cable also replaces a second boom arm, saving on weight and bulk.

You can then attach your camera to the self-leveling camera head. Head adjustments can be made, and the optional extension plate can be used, to accommodate a large variety of cameras. Shorten the boom length for greater stability when using heavier camera setups (up to 10 pounds) and adjust the Control Cable accordingly. Unfortunately, the Feather Camera Crane doesn’t include any sort of leveling bubble, which makes leveling the head during setup difficult. For a thousand dollar jib, we’d have liked to see the inclusion of a fifty cent bubble.

Once the camera is mounted, the Rock Bag may be attached to the handle using optional carabiners or the built-in loops at each corner and filled with rocks, sand, water bottles, etc. to balance the entire assembly.

The Feather Camera Crane is designed to accommodate a broad variety of camera sizes and types. We tried several, including a Samsung Galaxy S4 smartphone using a tripod mountable smartphone holder available through a third party.

We attached the unit to a light tripod — the Manfrotto 190XDB with the 501HDV fluid head. Setup took a matter of minutes. Once balanced, using the Rock Bag filled with water bottles and some sand, operation was very easy. With a light touch on the control handle smooth transitions from ground level to high up in the trees were easy to achieve as were large swooping moves. Using the tripod’s natural tilting action produced smooth tilts at the camera end for a nice variety of shot options. Overall, the Feather Camera Crane’s build quality, portability and performance are very impressive.

If you’re looking for a traveling companion for your next trek, be sure to check out the Feather Camera Crane by Lite Pro Gear.