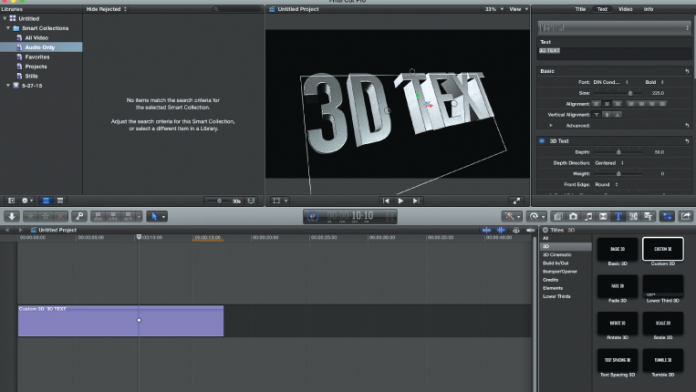 When Final Cut Pro X came out in June 2011, many folks saw that Apple was going to need to update the software to add features that were initially missing to make editing a complete experience. This author certainly turned his nose up to it from the get-go as not worthy of a high-end post environment. Well, Apple didn’t take long to respond to users’ desires by coming out with updates that brought much-needed features for pros and hobbyists alike.

With the release of FCP X 10.2, we get some great new features added to an already mature editing tool. In some cases, Apple is adding capabilities that, in the past, were only available as plug-ins. We’ll talk about some of these capabilities later, but know that FCP X 10.2 is a major new release with an amazing new set of features that will not only elevate the quality of your videos, but will be fun to use as well.

The most visible new feature of FCP X 10.2 is the ability to create 3D text. In the past, if you wanted your text to have some depth, you had to model, texture, light, animate and render your text in another app like Cinema4D and import that movie into your project. Not anymore. Without having to leave FCP X, you can now create beautiful 3D text with beveling, lighting and animation — all internally generated and fully editable. There’s a ton of choices for materials including metal, wood, plastic and many more. Bevel edges add some visual interest to your 3D text, and Apple has provided some great options and controls to customize the look to fit your project. To show off your 3D text, you might want to have it animate in or out using one of the preset movements or make your own epic animation.

From the get-go, FCP X had some groundbreaking color tools, giving users access to tools that didn’t even exist in plug-in form. One of my favorites is the Match Color feature. The most usable new feature for my workflow is the ability to add a shape or color mask to any effect, even third-party ones. Sometimes I want to just add an effect to a portion of my image, and masks give me that capability. Unfortunately however, there is no built-in tool for tracking a mask to  a particular object in the image.

There’s lots here to love no matter your skill level.

This new update also provides a bunch of small improvements. The color board has now been integrated into the Color Correction effect, so you can change the order as needed. You can also see many video scopes at once with excellent customizability.

The ability to save a collection of effects as a preset has now been introduced in this release. When I combine effects to create a certain look or style, I love having that saved as a preset to be recalled in future edit sessions. It might be some color correction, stylized effects or a blur with a custom mask. I can now create a set of my own presets, ready to use anytime.

With new cameras coming out a such a torrid pace, new codecs are popping up every week it seems, each one an improvement on image quality and storage requirements. Unfortunately, many new codecs require software to be rewritten to take advantage of those improvements. This latest release of FCP X has added many of the newest codecs including RED RAW XAVC, AVC-Ultra and more. This allows you to work in native formats without transcoding as often, saving you precious time and hard drive space.

The advancement of GPUs has brought amazing power to the desktop, but software developers still have to add the hooks to send the processing over to the GPUs. Like Adobe’s Creative Cloud suite, Final Cut Pro is now taking advantage of that power. RED RAW footage now utilizes the GPU to render and play multiple streams. H.264 encoding is accelerated, and the “send to Compressor” function uses the GPU — or two if you’re lucky enough to have them — to render out your projects even faster. It even helps me to lose weight; now I don’t have time to get a soda and candy bar during export.

In the past, when a user wanted to search for something in a large project, they were limited to only a particular event. Now, we can search across multiple events at the library level. This is a welcome and much needed capability for anybody with lots of material to sort through. There are also some presets for smart searches to show you things like favorites, still images, audio, etc.

The import dialog box has been updated to show all the options on one sidebar. In one place, you can set up media management, transcoding, keywording and image analysis. This is a much better import system, giving you direct access when you need it most.

On top of the big “look at me now” features, Apple has given us a good number of upgrades in this new release. These include enhanced optical flow for smooth slow motion that looks like it was shot at a high frame rate, the ability to instantly open any title in Motion and native MXF support to alleviate the need for transcoding or rewrapping.

Some people might say this release isn’t a big as expected with it being a year since any real update, but I say this release is chock full of goodness for most any user. Certainly, some of the features are geared toward the professional — RED RAW playback and rendering acceleration — and some toward everybody. If you’re a pro, don’t make any assumptions about some of these features not being useful in your environment. Some capabilities, like the 3D text feature, have the potential to be high cheese-factor tools, but Apple has worked hard to give pros the options needed for high-end graphics and compositing. If you’re using FCP X currently, this is a great update with many improvements to workflow. If you’re on the fence about using FCP X, this update only adds reasons to give FCP X a shot at being your main editing tool. There’s lots here to love no matter your skill level.