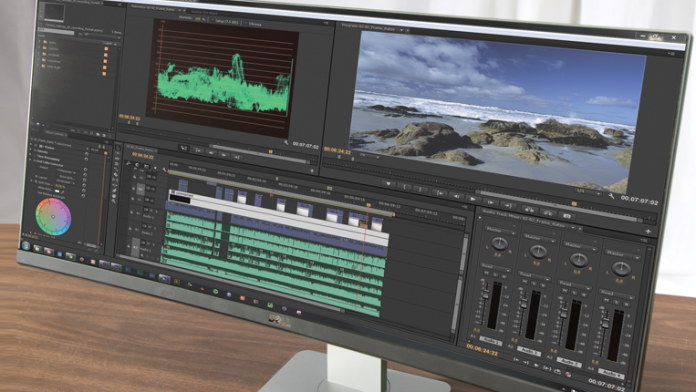 Imagine taking that two monitor setup you have been using most of your creative life, gluing the two displays together and removing the border separating them. Then, curve that whole set up to create one curved, ultra-wide screen. This is what Dell has done with its UltraSharp U3415W display.

Curved displays are all the rage. Whether it’s a sexy 60-inch curved television at Best Buy or a high-end computer display, curved is definitely in, and for good reason. That bend is more than just a marketing tool; its transformative. That curve is even better when the display has a whopping 21:9 aspect ratio with a resolution of 3440 x 1440. The Dell UltraSharp U3415W monitor is a video editor, colorist and VFX artist's best friend.

The monitor is an UltraSharp, meaning it is part of Dell’s high-end line of displays that rises above Dell’s other models, as well as much of the competition. The physical appearance of the U3415W belies the level of quality this display aspires to, looking very much like every other monitor Dell has built — though that is not necessarily a bad thing. Dell’s minimalist approach to monitor build and functionality is near perfect. A monitor that is this large and curved needs to sit on the desk while not taking up the entire workspace. Dell does this well; the slim frame and thin display — only 12mm — plays well with modern design and takes up no more desk space than necessary. Too many displays become a burden just by appearing to be too bulky, too large and too unsightly, creating a claustrophobic workspace. What Dell does best is make this ultra-wide display seem smaller and take up less space than it actually does. The surface is smooth and the bezels inside the panel further the illusion of thinness, making this a beautiful addition to your desk.

The display comes with a really fantastic VESA stand with tilt swivel and height adjustment up to 115mm, though it cannot turn 180 degrees into portrait mode due to the UltraSharp 34's absurd width. The UltraSharp attaches and detaches very easily from the stand. Despite its size and wide stance, this monitor is surprisingly easy to move around due in part to its light, thin build.
Video inputs include Mini DisplayPort, DisplayPort and HDMI 3.0, which few other ultra-wide monitors support. There is also a DisplayPort output for daisy chaining, an MHL for mobile devices and four USB 3.0 ports. All connections are in the rear under the monitor. Power is delivered with a standard power cable with the inverter inside the monitor. No need for a large power block taking up desk space or causing trip hazard under your desk.

The image quality on the U3415W is wonderful. While not quite up to snuff compared to high-end true color monitors, this display has found a sweet spot in performance and price. Brand new, the UltraSharp U3415W will set you back about a grand, but keep in mind that's essentially getting you two and a half high-end displays with a total resolution of 3440 x 1440. The Dell UltraSharp 34 is good enough for industry professionals while still being in reach of the video enthusiast.

The color gamut is good though not great, covering 100 percent of sRGB and 78 percent of AdobeRGB. For comparison, the Samsung U32D970Q and the NEC Multisync PA322UHD — both high-end 4K displays — can cover AdobeRGB in the mid-ninety percentile. Then again, the NEC will set you back three grand. The Dell UltraSharp 34's contrast is amazing with a ratio of 1000:1 and a brightness measured at 328 lux. The image right out of the box is robust and beautiful. The pixel density is around 110 PPI, a low number when compared to tablets and smartphones but decent with compared to most computer monitors. For the price, this monitor recreates a really beautiful images and is a real pleasure to use while editing, compositing, colorizing or working in photoshop. The display isn’t as sharp as many 4K monitors but is still decent.

While the U3415W is truly fantastic, it does have some shortcomings, particularly backlight bleeding, which is particulary noticeable around the edges of dark images and becomes more apparent when viewing high-quality video with deep blacks. Navigating through the menu, you are forced to use touch sensitive controls located on the lower right side. While they are among some of the better touch sensitive controls, they still lackthat tactile feel of a physical button. The menu system is intuitive and easy to navigate. The menu organization is logical and well-placed, being arranged in sets of list and trees, a huge improvement over most other monitors. Image controls include the usual brightness, contrast and sharpness, and color calibration includes red, blue and green. The gamma adjustment is unfortunately limited to a “PC” and “Mac” mode — no 3D LUTs.

The monitor has two nine-watt speakers that provide somewhat balanced audio that's good for a monitor but can't replace a decent set of speakers either in quality or volume. We say let monitors do that they do best and speakers do what they do best.

While the curve of the monitor is subtle, it is a great enhancement, creating an immersive experience that lends itself really well to post-production work, gaming or even catching up on Netflix. The U3415W is one of the better 21:9 monitors on the market.

Whether you’re an industry professional doing high-end work or an enthusiast looking to increase your screen real estate, this monitor would be a pleasant addition to your workstation. The Dell UltraSharp 34 Curved monitor is a lot of fun to use due to its ridiculous aspect ratio, curved display and great image quality. The minimalist and thin design will take up less desk space than most two monitor setups with increased screen real estate.

This display is a lot of fun to use due to its ridiculous width, curved display and great image quality. The minimalist and thin design will take up less desk space than most two monitor setups with increased screen real estate.