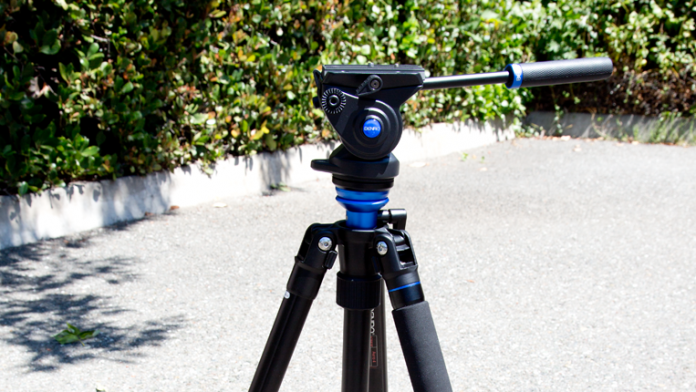 Benro has been making leaps and bounds with photo/video tripods since 2002, and while they are still a relatively newer company, compared to Manfrotto and Sachtler, there is a level of quality in their products.
“Benro has received many prestigious awards including the Chinese government’s ‘Quality and Reputation Award’ in recognition of Benro’s hard-earned reputation for high-quality production standards (Benrousa.com).”

While this is my first time using a Benro product, I found the Benro Aero 4 tripod to be a sturdy camera support that is perfect for intermediate videographers and filmmakers, but lacking in certain areas that would deem it a professional grade tool. First, lets look at the positive attributes of these sticks. The overall integrity of the legs, aluminum metal grade, is wonderful. On first inspection, I felt confident that the support system could provide the stability needed for my camera setup, and my assumptions were met every step of the way. I primarily use DSLRs when filming, so the maximum load of 8.8lbs for this tripod came into play many times during this review. After attaching my camera body, mid-range lens, shotgun, recorder and rail system with follow focus, I was still able to properly balance the entire setup without the tilt lock. Things took a dive, quite literally, after adding a metal matte box to the rig, but a cheaper, plastic matte box worked fine, so keep that in mind if you want proper stabilization while out in the field. Again, this is not a pro tripod, so the less accessories, the better. The quick release plate is a good feature, with a great safety lock, but the release button is a bit too close to the handle.

I took the tripod out on numerous shoots, in varying terrain, and the Aero 4 exceeded expectations on gravel, grass and slanted surfaces. The 3-lock position was a lifesaver when trying to capture shots on the side of a steep hill. The stability of this system is once again a huge draw, specifically on uneven surfaces (or wedged between two boulders). This leads me into the next indicator of excellence: the light-weighted factor. Having traveled, locally and internationally, with tripods of different sizes and weight, it is a tremendous relief not to be weighed down by bulky equipment. The Aero 4 is perfect for travel and for those moments when you need to get the shot in a hurry. The fact that this tripod can convert into a monopod is also a genuinely nice touch and adds to the factor of practicability and shot variation. Personally, I find this tripod to be more responsive and applicable for photography. All in all, this lightweight tripod can serve very useful in a tight spot, but I would not recommend it as your “go to” tripod for a few reasons.


On first inspection, I felt confident that the support system could provide the stability needed for my camera setup, and my assumptions were met every step of the way.

I would be remiss in not mentioning that the travel bag is well manufactured and comfortable to carry on your shoulders. To use the bag properly, pull the tripod stem to the top. Then, the legs must be flipped up to properly fit in the bag.

While the fluid, flat base head is smooth and comes with a great leveling system  that includes a leveling ball and a bubble level, the panning action is slow, with just a camera, to the point where trying to capture fast moving objects results in tipping on the first locking stage of the legs. Stages 2 and 3 are fine. As mentioned earlier, I took the tripod out into the field but found my still shots more effective than the moving shots. There is no adjustment for drag; you get what you get, and that is a problem you can and will run into with inexpensive support systems. The fact that the tilting motion cannot be regulated presents cinematographers with the challenge of manual (i.e. arm) resistance which leads to a lack of variation in shots or shaky footage for those of us who do not have the steadiest of hands. Even when placed on a slider dolly, the lack of control in the head presented problems.

Obviously this is not a $500, $1,000 or $3,000 piece of equipment, but these limiting factors can add up over time. As stated before, this tripod would be great for fledgling filmmakers and students would do not have a large budget, but who wish to maintain some regiment of quality. The tripod is a great build, multifunctional and has a sleek design in blue and black.Plus, it’s portable and reasonably priced at $259. Rest assured, you won’t break your wallet or camera with this tripod.

Quinn Winchell holds an MFA in Directing from the Academy of Art University in San Francisco (2011) and has lectured at California State University, Chico in narrative screenwriting, American Cinema and World Cinema.