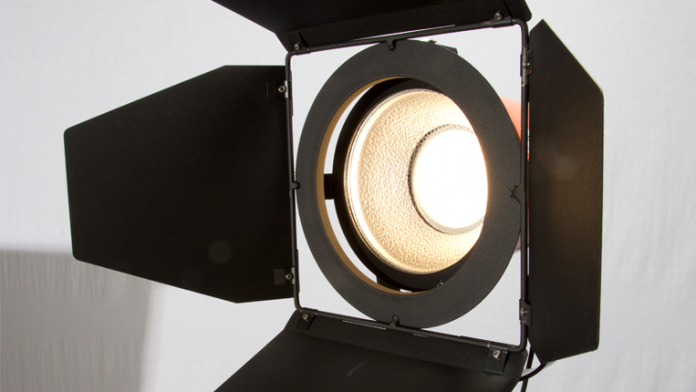 Intention is what distinguishes a good tool from a bad tool. Does the tool allow you to accurately recreate the vision that is in your head — the vision that you are intending — regardless of whether or not it would better off staying in your head? This standard is well known to those of us who have purchased a budget, daylight-balanced LED light panel only to then flip the switch and discover that the crisp office interior you were intending has transformed into a green-tinted Burger King bathroom.

Fortunately, the folks at Photon Beard have been working on clever ways to make LEDs better. The PB80 uses remote phosphor plate and mixing chamber to output a light with no visible point sources, a great improvement over the freckle-faced LED panels many are used to. This allows the PB80 to be positioned and controlled in much the same way as a traditional tungsten source. Its small form factor and low weight doesn’t hurt either.

The quality of light is also improved with increased color accuracy. And you don’t need to take my word for it. The PB80 was tested by Alan Roberts for the Television Lighting Consistency Index (TLCI). It scored 95 for the daylight disc and 84 for the available tungsten disc (more on the disks later).

Rest assured that all the traditional Redhead accessories will fit.

One reason Mr. Roberts uses the TLCI scale rather than the more familiar CRI is akin to why Fahrenheit is a more precise unit of temperature than Celsius. Unlike the CRI scale, where a score of greater than 90 is widely regarded as the minimum for television use, the TLCI-2012 scores are more spread out, allowing for a more nuanced measurement of color rendition performance. When Mr. Roberts gives the PB80 a 95 daylight rating, we know he’s not cooking his books like those primitive CRI fanatics.

Numbers aside, the results really speak for themselves. We tested our generic LED panels side by side with the PB80 and the race was over before the gun was fired. As advertised, it looks like 5600K daylight, and that’s exactly what we want when we choose a 5600K light. There’s no visible tint to our eyes or in camera. We achieved a properly graded image without ever feeling the need to correct for any annoying color casts or anomalies, which is a major time and brainpower saver. Everything looked exactly as we had intended. The optional tungsten plate was not only easy to swap in, but looked great to our eyes and the included barndoors provided us with the ability to shape our light.

We also had the opportunity to run some flicker tests with our PWX-FS7. Side by side, rolling at 180 fps, our generic video LEDs oscillated like an underground Russian techno establishment while the PB80 performed perfectly. Of course, there are many factors that can introduce flicker into digital video, so make sure to run some tests with your camera and lighting setup before Brad Pitt gets in front of the camera, or you could end up with the most expensive and unusable footage you’ve ever shot.

The PB80’s light output was decent. As Photon Beard advertises, their 80W LED gives similar light output to a 400W tungsten redhead. If you want warp 11, you’ll need their Platinum Blonde HMI which outputs the equivalent to nearly five thousand watts of tungsten light. For a relatively inexpensive light, however, the PB80 holds its own. The built-in dimmer worked as advertised and delivered smooth gradations in light output with no visible loss in light quality or excruciating buzzing noises. We ran the PB80 directly off of our standard 120V (works with 90 to 260V 50/60Hz) wall socket but you can also use your standard V or Gold mount camera batteries (11-17 VDC).

Rest assured that all the traditional Redhead accessories will fit, including soft boxes, snoots, scrims etc. When it comes to must-have accessories, the optional tungsten disk is well worth the investment. Despite scoring lower on the TLCI scale than the daylight disk, we didn’t notice any game-breaking color issues or inconsistencies with this disk, and it was a simple two-minute job to swap in — no tools required!.

Cameron Farboud is a documentary, wedding and narrative filmmaker and photographer.

Tell Your Story More Effectively with the Correct Application of Hard...

“Lighting is to film what music is to Opera” -  Cecil B. DeMille. As the legendary director was implying, light is the foundation of our...