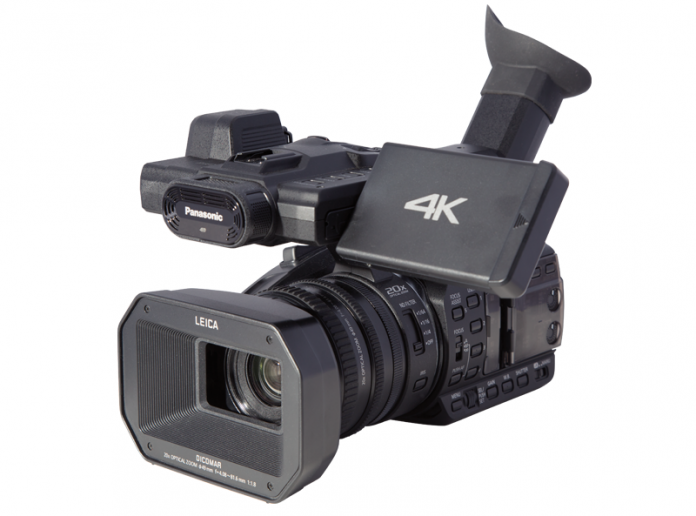 By now you’ve probably seen a 4K television demonstration, watched the crisp footage, done your research and come to the horrifying conclusion: “My video camera is going to be obsolete — again.” Bad news is you’re right, and all too soon, clients will ask if you can shoot their productions in 4K. The good news for budget-conscious video shooters is there’s an affordable 4K camera now available from Panasonic: the HC-X1000.

The HC-X1000 is a mid-sized camera that feels compact. It weighs around three and a half pounds, making it easy to support during handheld shoots. Although the body is composed primarily of heavy-duty plastic, it doesn’t feel cheap or flimsy. It has a standard grip configuration: a handgrip on the right and an overhead handle. Both grips have their own record buttons and zoom rockers.

The bulk of the remaining buttons are on the left side, including neutral density filters, audio controls and SD card access. The adjustment rings on the lens barrel control focus, zoom and iris, but are inaccessible from the right side of the unit as they disappear under the hand grip. Adjusting them is possible from below, left and only partially from the top side of the unit. One XLR input sits on the back right side of the camcorder while the other is just forward of the top handle, conveniently close to the shotgun mic holder and accessory shoe.

The 3.5-inch LCD screen slides neatly out from inside the handle and can rotate 270 degrees along its axis. It can’t fold alongside the camera body, meaning the LCD isn’t visible directly from the side. The touchscreen requires a firmer touch than, say, your average smartphone, but it’s infinitely easier than using the dial button on the side. As a bonus, you can assign some features to physical buttons on the camera body, so you don’t have to dig through the menu for an adjustment while shooting.

Instead of including a remote, the camera is compatible with the Panasonic Image App for smartphones and tablets, which allows users to adjust zoom, focus, gain, and white balance remotely. It even allows you to start and stop recording or shut the camcorder down. Of course, there is also an image preview that, while not full screen and certainly not 4K in resolution, lets you see where the camera is pointing. The connection is possible either by utilizing a local Wi-Fi connection, or more portably, via Near Field Communication (NFC). The app is available for free in both the Google Play Store for Android devices and the iTunes App Store for Apple devices.

Behind a tinted plastic door there are two SD card slots compatible with either SDHC or SDXC cards, though you’ll need a U3 rated card for 4K recording. Configure them for use one at a time, together simultaneously or for background recording during high definition shooting. Slipping cards in and out is extremely simple, fast and doesn’t excessively jiggle the camera. As a major bonus, the memory cards don’t cost a fortune. In the past, recording true HD necessitated steeply priced media solutions, drives and card readers that would leave the rest of your production budget in sad shape.

You can output video via an HDMI port or RCA audio/video cable ports. Connections to PC are handled via USB 3.0 and the unit can also copy footage to an external hard drive should a computer not be available.

Going for a Road Test

Zoom on the HC-X1000 comes in three styles. The first is 20x optical zoom, which relies on the high quality physical lenses and never loses resolution. Next is digital zoom, available only in three levels, 2x, 5x and 10x, with each one accompanied by a drop in resolution. Lastly, 40x intelligent zoom, while unavailable in 4K mode, provides a little extra after the optical zoom is exhausted and doesn’t horrifically stretch the image as the onboard hardware works to keep the image sharp. While no substitute for pure optical zoom, intelligent zoom provides a nice assist when you need a little more zoom than the lens alone can deliver. While zooming in and out in a quiet room, the motor noise was almost unnoticeable in the playback and ambient noises easily overshadow it when recording outdoors.

The HC-X1000 provides an economical, yet professional path to 4K/HD video.

The autofocus is responsive in full-wide shooting, and the results were similarly satisfying in full-telephoto. There was a slight problem when panning from loose stalks of flowers in the foreground to a distant background and then back to the flowers. The autofocus seemed to continue looking through the flower stems, maintaining focus on the distant background instead of pulling back to close range. There were also minor instances of the “push af,” auto focus-assist button overshooting crisp focus and taking a moment to come back. However, these were extreme cases of pushing the limits of the automatic systems, and if you’re really going extreme shooting, there’s a nice big focus ring around the lens just for you!

Similarly, the optical image stabilization systems are also satisfactory. Full telephoto of a distant fishing boat without stabilization produced barely usable jittery handheld shots in which the boat bounced around the frame. With stabilization engaged, the image smoothed out enough to see the distant fishermen casting their lines. While stabilized, camera movement resembles a “swooping” motion rather than small individual jerks and starts. The stabilization also did a good job of taking the edge off of walking and running shots, even with little more than a half-hearted attempt at holding the camera stable.

For an onboard microphone, the stereo mic above the lens hood is more than decent. From the close sound of a passing car, the tires bumping over bridge sections and finally the engine climbing the far-away hill, the audio recording was high quality. The automatic gain control does an adequate job of adjusting the sound levels, too. Bumping the camera body, fiddling with settings and the operator talking comes in loud, partially due to the plastic construction, but a little care goes a long way in avoiding these noises. The audio controls on the left side include level dials for manual gain control, phantom power and switches to designate sources for the two audio channels. The onboard speaker sounds muffled, due to poor placement — facing downward from the handle straight into the adjustment rings on the lens. The onboard headphone jack is a much better alternative.

The camcorder has a small switch toward the back labelled iA/MANU that, when switched to “Intelligent Auto,” lets the camera control focus, white balance, iris, gain, shutter speed and ND filter settings. During shooting, the automatic control of these settings was seamless. The camcorder adjusted quickly to low-light situations, so panning from shadowy areas to those lit in bright daylight wasn’t a problem. For more specific shots, such as shooting a rack focus, switching over to manual is necessary. The iA mode is as close to “beginner mode” as the camcorder gets. On that topic, you won’t find “old-time sepia” mode or a button for “funhouse mirror” effects in bubbly menus. You will find “knee,” “gamma” and “detail coring” scene settings, color bars, on-screen composition and unit level guides. So beginners beware — there is a learning curve once you leave the shelter of iA mode. However, with a little research and a read through the owner’s manual, most settings become a lot less scary than they sound and give you more control over the image quality.

While there is no real ability to go beyond the standard frame rates of 24, 30 and 60 fps, the HC-X1000 does have a time-lapse mode. It’s capable of five interval settings in a range between one second and two minutes, always without audio. Recording a cloudy sky at ten second intervals yielded footage of clouds sliding by, growing and shrinking as only a good time-lapse can reveal.

Infrared shooting was passable. At a distance, the infrared light didn’t really help light the scene. Close-up it’s ok. However, you have to either accept the green-tinted footage or desaturate it in post. Overall, it provides a modest boost to distant dark shots.

The on-screen guide selections include a leveling gauge, histogram, audio levels, focus peaking, battery power level, card status and more. You can also individually turn most of these off as the screen looks quite cluttered with them all running, but they’re there when you need them.

It Does What Again?

No video camera is without quirks, and the HC-X1000 has a few. The battery level indicators on the battery and camera didn’t always agree. The battery meter quickly became convinced it had one-quarter power left while the camera insisted power levels were at least three-quarters full.

There is also a small text notification that pops up to suggest ND filter settings. Unfortunately, what it was suggesting was already the current setting, and worse, it was flashing in the middle of the viewfinder during shooting. It goes away after a while, but having a flashing notification blocking your shot can be quite frustrating.

Another curiosity of this camera is an illuminated color ring where the lens body meets the camera housing. It shines blue during standby and changes to red while shooting. It’s quite stylish but doesn’t realistically bring more to the table than a standard tally light. But hey, it’s cool and it makes the camera look like it fell out of a sci-fi film!

The Panasonic HC-X1000 is a great way to get into 4K shooting without breaking the bank. It puts a strong set of manual controls and settings into an economical chassis that has a good set of lenses in front of it. Intermediate-to-professional level video shooters will find its no-nonsense menus and controls quick, clean and efficient. Beginning enthusiasts shouldn’t despair though; with some good determination, you’ll be taking advantage of one of the easier paths into 4K and upping your production values, too. 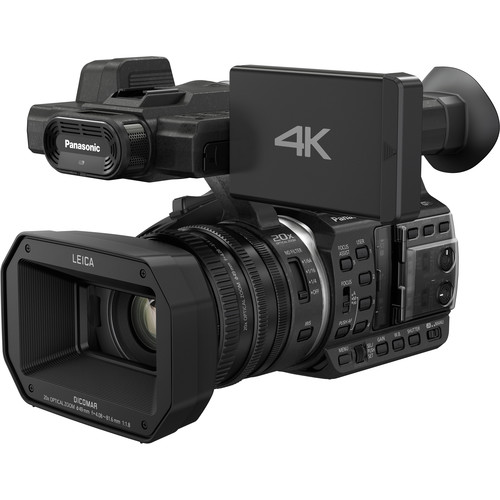