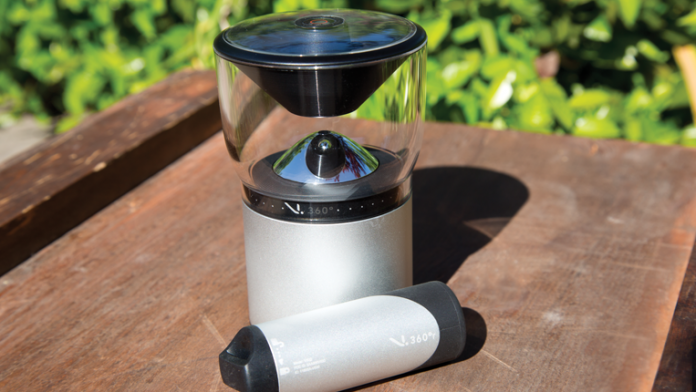 Many in the industry believe that immersive cinema and gaming are the future of entertainment. This includes Facebook, who recently shelled out two billion dollars to buy the virtual reality start up Oculus Rift. The Sundance Film Festival’s New Frontiers section this year featured, among other things, 11 virtual reality projects. We are on the precipice of a dramatic shift in entertainment, and the time is ripe for a product to take advantage of this trend towards immersive content. VSN Mobil is one of the first contenders to throw their 360 degree hat into the ring with the V.360, claimed to be the only camera to shoot a true HD 360 video. Their hope is that this new camera will prove to be more than just a novel toy.

Beyond the 360 degree image, the most striking aspect of the camera is its shape, which is more like a coffee grinder than an action sports camera. The camera body is a 4-inch by 2.2-inch cylinder, the lower half of which houses the internal 2,610mAh battery, MicroSD card, Micro USB 3.0 HDMI port and a tripod mount, a very welcome addition often missing on other action sports cameras. The upper half of the cylinder is clear plastic that protects the camera apparatus — a reflective cone with the actual camera inside its tip pointing up toward a small mirror at the bottom of an inverted cone attached to the top. While this makes for the strangest looking camera on the market, it provides the capability to create an unstitched 360 degree image, unlike other 360 degree and panoramic cameras.

Being able to horizontally pan your shot 360 degrees in post is unbelievably cool.

While the camera is larger than a GoPro, it is light for its size weighing in at 8.82 ounces. The flat bottom of the cylinder is perfect for setting the camera on the ground to catch a skateboard kick flip or a car flying by. The top of the camera features a bubble level, which can be used when mounting on a tripod or other kind of stand. The camera size and weight would be a slight inconvenience when mounting on a helmet or body though. A nice feature of the camera is that it is compatible with the plethora of GoPro mounting hardware. The camera comes with a Bluetooth remote for turning the camera on and off, taking pictures and hitting record. The remote is rubber encased cylinder about the size of a roll of nickels.

The V.360 is very much a one trick pony, though that trick is utilized in about every way imaginable. On top of being able to capture true 360 degree video, you can take panoramic pictures which can then be Geo Tagged and uploaded to Google Photosphere, and there is also a cool time-lapse feature.

The camera itself is a 16 megapixel 1/2.3-inch sensor that records video at a resolution up to 6480 x 1080 with a field of view of 360 x 60 degrees at up to 30 frames per second. It’s powered by an impressive 2.3 GHZ Qualcomm Snapdragam quadcore processor found in many smart phones. Technically speaking, being that the camera has a horizontal resolution of 6480, it can be said that the camera shoots 4K video.

This is VSN Mobil’s first take on a 360 degree camera and the image quality reflects that. The video looks like it came from a cellphone: very grainy, poorly compressed with the occasional digital artifacting and color imperfections This all exemplified in low light. When the lights start to go down the image becomes very grainy and unusable — again think cell phone video. Just because this camera won’t be used in a professional capacity, it does not mean it’s not a really fun camera to strap to your surfboard, mountain bike or race car. Being able to horizontally pan your shot 360 degrees in post is unbelievably cool.

VSN Mobil claims that the camera body is built to military grade durability specs, though the camera feels fragile and light. The clear plastic that encases the camera scuffs very easily and those scuff marks as well as any fingerprints get picked up. It feels as if one crash will destroy the unit, though a crash test was never performed by this author. The camera is waterproof up to three feet of water for thirty minutes without the need to buy any additional housing or hardware. There is a rubber seal on the battery/microSD slot/HDMI port door that makes it very difficult to open but protects the electronics from water damage.

The camera has the ability to record stereo audio with two pinhole mics on the lower half of the body. Like all other action sports cameras, this is not usable audio in any professional sense  but will capture your agonizing screams when you crash your snowboard on that half pipe with the added bonus of being able to pan the shot to see your body as it bounces away from your board.

There are no buttons or displays on the camera, only a red/blue indicator light. The entire interaction with the unit is done with the provided Bluetooth remote or with your smartphone/tablet using the free app. The app is something the team at VSN got right, though it is not without its problems. The UI is simple and easy to use. You just connect your phone via WiFi or Bluetooth to the camera for complete control. Using the app the camera can be switched from video to picture to time-lapse. While there is no exposure control, white balance can be adjusted using a couple basic presets. The app also allows you to live view what you are shooting, though there is up to a three second delay. Communication between the smartphone and the camera is not consistent. You can also playback clips and well as edit and export them for upload.

The V.360 is priced at $449, which for a camera that is not ready for professional use and only has niche appeal seems a bit high. With future models,  we hope the camera’s image will improve in such a way that it may be used in a professional setting. The image quality in bright vivid daylight is good, but as soon as it gets darker the image suffers dramatically. The form factor is awkward and you really have to check the protective plastic that covers the camera as every fingerprint and imperfection shows up. The app’s user interface is simple and easy to use but lacks some basic functions such as exposure control and suffers from a serious delay in live view. All in all, this camera is fun to use and will likely find an audience in the extreme sport world.

Jason Miller is a professional filmmaker, editor and visual effects artist whose work has been seen in feature films and national marketing campaigns.