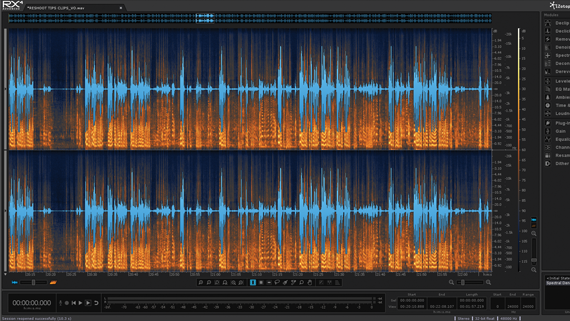 Recording audio in the field can be tricky. Dealing with the elements of the world that you can't control will make for a frustrating edit and can ruin even the best take. But with iZotope RX4 things like birds chirping, cars driving by or an overly live room can be fixed with relative ease. RX4 is, simply put, a visually based audio repair tool that allows audio engineers to clean up even the most problematic audio.

RX4 is to audio what Photoshop is to photography. It will allow you to completely clean up your audio files. Offering the capability to declip over modulated audio, denoise just about any constant hum or buzz and match EQ or the ambience of another piece of audio. Need to normalize audio from an interview where the subject has a wide dynamic range? Within a few minutes, RX4 will allow you to have even dynamics, controlling both the high and low input with great transparency and without compression.

iZotope created the strongest, most intuitive and clever audio repair tool that we’ve encountered. Audio engineers everywhere would benefit from having this tool at their disposal. Studio engineers can use it to clean up buzz from a noisy guitar amp, remove unwanted ambience and then match its EQ to an earlier track from a prior recording session. No longer will the many elements of the world, be it environmental or user error, destroy that perfect take.

We began by installing the program. Like most software, it was easy to install. We installed it on a PC and chose to use it as a standalone program. Importing an audio file was simple — choose Open in the file menu, select the file and it’s ready to edit. Once your file is open in the program, using the spectrogram, you can visually see problems in the audio. The handy overlaid view shows both waveforms and spectrogram at the same time. Problems appear as patterns in the audio. For example, a hum from a refrigerator, because it’s constant, showed itself as a band along the bottom of the spectrogram. By clicking on the remove hum button tool, the tool window for hum removal opens. Select the hum and tell the hum removal tool to learn the sound, then by pressing the process button, poof the hum is gone with little-to-no change to the original audio file. If the process degrades the audio, as this reviewer has experienced with other noise reduction processes, RX4 will allow you to pull out up to eight harmonics from the offending hum. By removing fewer harmonics, RX4 allows the right amount of hum removal without degrading the original sound source.

RX4 is to audio what Photoshop is to photography.

Our first test was trying to clean up some audio recorded in a large church sanctuary. Five different subjects were interviewed, offering many different issues. First, each subject spoke with different dynamics, so we fixed it using the leveler tool in RX. We were able to fix the change in dynamics to get a strong constant dynamic from speaker to speaker. The second issue we tested was correcting differences in presence due to mic placement. A lapel mic was used and because of the women's attire, the mic was off axis, sounding muffled. Using the EQ match tool, we highlighted a segment of the sound we wanted to emulate and told RX to learn it.

Then, we highlighted the offending audio and clicked process. Boom, the difference in sound was corrected. Note that RX did not create any other issue within the audio because of the correction. Many times, when correcting audio, to fix one thing is to add another problem, and RX worked with transparency to truly fix the problem without creating another.

Next, we had one speaker who, because of his dynamics, created a bit of over modulation. Just like the other issues, we highlighted the problematic audio to apply the fix.

We used the declip tool and chose the preset for digital clipping, pressed process and the audio was fixed. Then lastly, because the room was so large, each speaker had an abundance of reverb. We highlighted the offending audio, choose the dereverb tool and, with a bit of tweaking of one of the presets, were able to remove most of the reverb. We have done this kind of repair before, but it required putting a gate on the voice and took much longer to do without yielding as pleasing a result.

We started out with many complex problems and within 10 minutes were able to correct all of them with astounding transparency and effectiveness. This also was our very first use of RX, which speaks volumes to how easy and powerful this program is to use.

iZotope RX4 is an amazing tool. It’s easy to use, it’s very powerful, and it will cause you to never look at problematic audio the same way again. Being able to repair problems simply and quickly keeps inspiration going and doesn't burden the engineer or editor. Many great takes have been scrapped because of audio problems, but fear no more, iZotope RX4 is here, saving you time and saving the day by repairing most audio issues.This reviewer can't say enough about how amazing this tool is. Shout from the rooftops to all that will listen, fear no more, your solution is here. Thank you iZotope for creating such an amazing product.