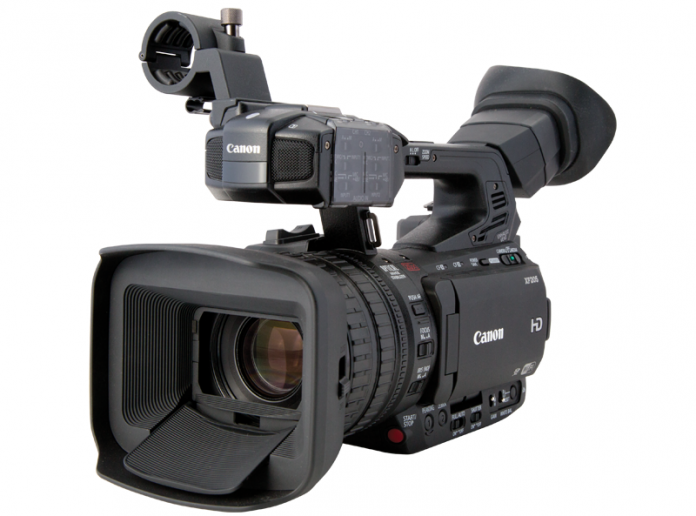 There are many occasions, when you’re behind the camera, that don’t come with second chances. Like shooting live news or covering a wedding; if you miss the moment, it’s gone forever. “Excuse me, can you repeat those vows again? I’m having a focus problem here.” Yeah, not getting many referrals there! Enter the Canon XF205, a surprisingly low profile, high-feature professional HD camcorder that seems created for the rush of news, events and more.

First impressions can be very deceptive. Upon unpacking the XF205, the first thought that jumped to mind was: “I thought it would be bigger.” When buying a professional camcorder, there can be the expectation that the unit will be large and impressive, even if that results in it being a pain to carry around. The XF205 is smaller and lighter than most mid-sized camcorders, which results in less fatigue during shooting and lighter camera bags.

On the exterior there are three, that’s right, three record buttons. Two are in standard positions, on the right-side grip and on top of the handle. The third is on the front-left corner, just behind the three adjustment rings on the lens barrel. If you use your right hand to hold the camcorder and your left to steady it from the bottom, your left hand isn’t far from that third button.

Speaking of that right-side handgrip, this one can be rotated forward about 120 degrees and locked in 15-degree increments. At first this seems odd, why change up the standard handgrip? Once you’ve tried it, however, it becomes clear. Instead of forcing the shooter to hold the camera from the bottom, it provides a vertical grip that’s easy on the wrist. If it still sounds strange, try this experiment: hold your shooting arm out as if you’re holding a standard camcorder using the handgrip and lower that camera straight down while keeping it level and facing forward. Feel your wrist complaining? Now rotate that imaginary grip forward 90 degrees and try again. Much better isn’t it?
Advertisement

Each battery comes with a power gauge on the back that allows for checking how much juice is left, even when it isn’t on the camera. Installing the included lens hood is a no-brainer as it shades and protects that expensive lens. The circular lens cap becomes somewhat useless after that, as flipping the switch on the side of the hood snaps the front closed.

Another interesting fixture is the air intake and the exhaust vent on opposite sides of the camera. During the test shooting, hiking down a trail in close to triple digit temperatures, there weren’t any audible fan noises. Whatever Canon has going on inside there, it’s quiet.

Special recording modes, such as time-lapse and slow motion are only available while in the MXF format, but if you’re going to the trouble to get a special effects shot, it makes sense to get the best possible resolution. Another special feature is the ability to do prerecording, and thereby capture the last few seconds of footage before the record button is pushed.

Getting started with the XF205 can be challenging. However, you can choose to skip much of the learning curve by sliding the switch on the side labeled Full Auto to the On position. The camera takes control of exposure, focus, white balance, ND filter, gain and more. And it does a decent job keeping your footage respectable.

For those who like a good measure of control, there’s plenty of that, too. The XF205 has more than 20 buttons and switches. Inside the camera menus are many adjustments to make, and even the option of assigning and reassigning button functions. Around the lens, there are three separate adjustment rings, one each for focus, zoom and iris control. And while they are very convenient for manual adjustments, they do have an electronic feel to them, which you may or may not care for. It doesn’t feel like you’re physically adjusting the lens; instead, you’re spinning the ring, and quite separately the camcorder servos move the machinery. There is also no direct manual access to the ND filters through a control, like a button or switch. It’s controlled automatically, or manually, as a function of changing the aperture.

Overall, the XF205 is a valuable tool for demanding professionals.

The menu button brings up a whole host of options, including independent switching of the viewfinder and OLED panel between color and monochromatic zebra settings and picking focus assist peaking colors. Options such as interval, single frame or fast and slow-motion shooting can be found here as well. Initializing cards, selecting your recording format and for the technically savvy, setting up an FTP or Wi-Fi connection can all be done within the menus. Navigation is precise through the use of a small, directional joystick-like control at the rear of the unit.

The XF205 certainly impresses with the capabilities of its lens. Depth of field shots are easily within reach and the bokeh, or quality of the out of focus areas, is great. Combined with the manual focus ring, it’s easy to add a rack focus to your project or blur a less-than-picturesque background. Optical zoom is the only type you’ll find here, to the tune of 20x. And you won’t find any “digital” zoom; this camera has too much class for that gimmick.

The XF205 also has a five-axis optical image stabilization system that corrects not only for vertical and sideways motion, but also unintentional panning, tilting and the type of roll that gives you an unintended dutch angle. When testing the XF205 from a stationary position, fully zoomed in on a subject, the stabilization system turned a bouncing “earthquake” shot into a smoothly floating frame. One noticeable downside to the stabilization system is when the camera attempts to stabilize an intentional camera move, it sometimes results in a “sticky” pan. Or sometimes there’d be a brief moment of unneeded roll correction when the image twisted ever so slightly. Overall, the stabilization more than compensates for any drawbacks, and if the camera needs to remain absolutely still, you can always bring your trusty tripod. For moving shots, the stabilization smooths out much of the handheld bumps and bounces, within reason of course.

Focusing has always been tricky when shooting HD. Panels and viewfinders only have so much resolution, and unless you drag an HD monitor along, help is needed. Nobody wants to find that all of their carefully shot wedding or event footage is actually out of focus when they start the editing process. The XF205 provides full autofocus, a momentary autofocus button, peaking indicators, a magnification button, a waveform focus indicator and face-tracking autofocus. When tested, the face-tracker drew a white box around recognized facial features and adjusted the focus accordingly, even when moving closer and further from the subject. There is also a menu option to set the priority of facial tracking to follow more or less strictly.

The OLED panel is bright and clear. It’s hard to see in harsh overhead sunlight, and shooting outside at high noon found the viewfinder getting much more use. Both displays include the usual stuff such as audio levels, battery life and recording time left. There is also the option to display a waveform monitor as well as a vectorscope for the ultimate real-time video monitor. When rotated forward, the OLED panel tends to interfere with operating the momentary autofocus button, the infrared mode switch and the focus and iris switches, but it’s a minor irritation.

A great feature for night shooting is the infrared mode. Flipping a switch turns the display monochromatic, or tinted green if that’s your preferred setting, and activates the infrared light on the camera front. While exploring this mode, it became apparent that the onboard IR light only works well with close up objects or shooting indoors as it only illuminates details within six to 10 feet. Outside, however, streetlights and other sources, usually too dim to be useful, provided all the light the camera needed for its night vision to produce a viewable image. With the infrared mode turned off, the surroundings were still dimly visible, but plagued by rampant blue video noise caused by too much gain.

On the front of the handle are all the audio controls for the XF205. Two dials for level control and several switches protected by a flip-down tinted plastic panel. Phantom power, input and internal mic selectors and automatic versus manual limiting can be adjusted here. On the opposite side are two XLR 3-pin inputs and one 1/8-inch minijack microphone input. Overall it’s a simplistic, yet complete set of audio controls. They do happen to be within an inch of the onboard stereo mics and not far from the shotgun mic mount, so a minimum of fiddling while shooting proved to be the best way to reduce unwanted noises in the recording.

At the back of the unit are several covered ports hiding the bulk of the camera’s outputs. There’s an HDMI port for showing footage on HD displays, a 1/8-inch minijack for an AV terminal and a headphone jack for your audio monitoring convenience. The remaining ports give the XF205 a more professional flavor. There’s an Ethernet LAN terminal for connecting to local networks and wireless routers with an option for remote control through an external browser for more advanced users. There are four BNC connections including timecode, genlock, HD-SDI and 3G-SDI ports. New video shooters probably won’t find these connections useful, but in a professional television production environment, they’re right at home.

Further up the camera body, neatly hidden on the vertical handle support, is a port any user can utilize regardless of their expertise: USB 2.0! It provides a simple way to unload your footage to a computer without any fancy video decks or converters.

Some high-end cameras run easily into thousands of dollars for the camera body alone. Often the lenses will cost a separate fortune. The XF205 comes in around $4,000 making it a bargain for a quality HD camcorder. Nevertheless, it may not be the optimum choice for beginners or those looking to lightly dabble in shooting video. For example, the MXF format can be difficult or near impossible to get into some editing software. And the full HD format quickly gobbles up hard drive space. Be aware that if you want to rock a professional camcorder, it can require some expensive supporting equipment. And you’ll need to bring some extra determination and patience with you.

Running With the Pros

The Canon XF205 is built for the on-the-go professional. From simultaneous low and high bandwidth recording, five-axis image stabilization, the rotating grip or countless focus assists, it’s great for capturing footage in a fast-paced environment. Rookie users might find the advanced features and ports challenging to learn, while seasoned shooters will be happy they’re available. Overall, the XF205 is a valuable tool for demanding professionals.