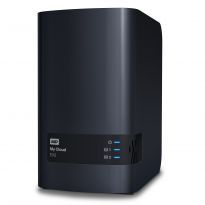 The primary function of the My Cloud EX2 is data protection, it serves as a personal cloud backup for consumers, creative professionals, and small home offices. There are multiple serving options for the My Cloud EX2, it can be a file server, an FTP server, a backup server, or as a P2P download server. Its ability to backup files and share with multiple devices, as well as platforms, makes the My Cloud EX2 a true personal cloud computing device.

The data protection and security it offers over subscription-based cloud services make it worth a look.

Pricing for the My Cloud EX2 starts at $200 for the diskless enclosure.

The Nikon D4S will include the newly developed 16.2 megapixel FX-format CMOS sensor with EXPEED 4 processing, making it 30 percent faster than its predecessor the D4.

One of the many new features includes enhanced image quality improvements. The D4S will have enhanced picture control files, that allow for better representation of skin tones, as well as fine tuned white balance adjustments; allowing users to plug in specific color temperatures and spot white balance in live view. Nikon has enhanced upon the proven 51-point autofocus system and is now able to focus on dynamically moving subjects as well as lock on to all 51 auto focus points together to act as one. There are no improvements to auto focus for video mode, the D4S will still use contrast detection.

Another notable feature is the expanded ISO range. D-movie mode has a wide ISO, ranging from 100-25,600, making it ideal for low light environments. The ISO can be pushed even further to 409,600 (Hi-4) equivalent. It’s stated that the FX-format image sensor and EXPEED 4 processing allows for rich tones and sharp edges with minimal noise even at such high ISO.

The D4S will also be boasting a new and improved battery, the EN-EL 18a. The new battery has a higher milliamp rating and is estimated to last “more than an hour or two.”

Panasonic gave Videomaker a sneak peek at a few products they’re unveiling at NAB this year. One of interest is Panasonic’s first P2 HD handheld camcorder with AVC-ULTRA recording. The five-pound, black AJ-PX270 looks to be a similar size to their HPX and HVX models. Panasonic dramatically upped the ante with the PX270 by improving a camera popular with budget-minded cinema creators to include many features that will impress news gatherers as well as sports, corporate, education and event shooters.

Panasonic claims the camera possesses three newly developed, high-sensitivity, low-noise 1/3-inch MOS imagers, which represent colors better than, say, an AG-HPX250PJ, and work well in low-light situations. One can tell from the many on-body buttons, switches, dials and lens rings that this handheld gives the shooter the creative controls usually only found on shoulder mount, production cameras. The three manual lens rings for zoom, focus and iris are impressive on a camera this small. The 22x zoom with a 28mm-616mm (35mm equivalent) range should keep most non-changeable lens shooters happy.

The multitude of recording capabilities or frame size/frames per second options are dizzying.

The PX270 records to traditional P2, microP2 and SD cards. The one-year-old, solid-state microP2 card is the size of an SDXC/SDHC card but has the transfer speed, capacity (32 or 64GB), reliability and security of the larger and more expensive P2 cards. The camera has two microP2, one normal-sized P2 and an SD card slot.

The multitude of recording capabilities or frame size/frames per second options are dizzying. The variable frame rates in 1080/59.94p range from 23.98fps to 60fps and include the standard 25fps for our European friends and 30fps. News gatherers and reality show shooters will be interested in the PX270’s built-in wireless capabilities. Wireless LAN functions are available via an optional Wireless dongle, streaming and FTP via a 3G/4G/LTE network will be available in the near future and the ability to uplink low-bitrate proxy and full-quality broadcast content is available.

There are plenty of choices for professional interfaces: HDMI out, HD/SD-SDI out, 3G-SDI out to support 1080, 60p output, genlock in for multi-camera operation, timecode in/out and USB 3.0 and 2.0 options.

If you’re going to get serious about shooting 4K video, you need to consider the media you plan to record that footage to. Lexar recently announced its new high speed CF card, the 256GB Professional 1066x. It uses UDMA 7 specifically, for fast 160MB/s transfer speeds. When you plan to shoot high bitrate video, you’ll have a need for speed and the 1066x promises to deliver. Retailers are offering it for about a grand, so it’s not cheap, but if you’re shooting traditional HD footage, you’ll cover a lot of miles before having to off load your files, and when you do, at this speed, it won’t be an all night task.