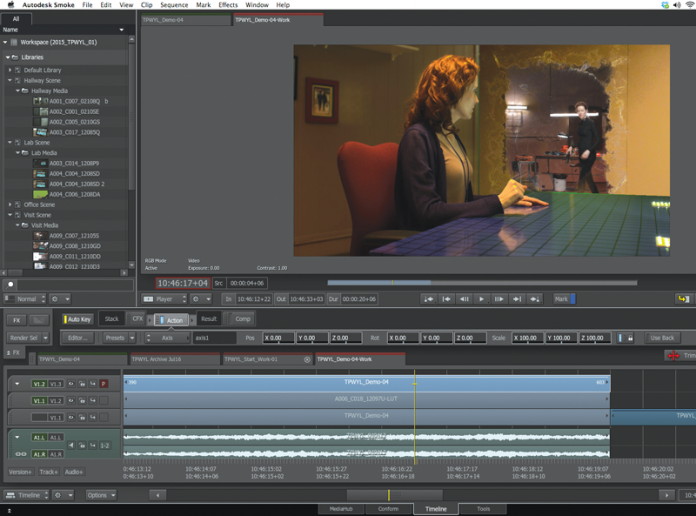 What is Autodesk Smoke?!

Smoke 2015 is also a full-fledged video editing software package. For Final Cut users, the keyboard shortcuts are exactly the same, so crossing over is easy (but we'll get into that a bit more later).

It won’t take long for experienced editors to get a grasp on Smoke. As stated above, the keyboard shortcuts are the same as for Final Cut Pro 7. However it works a bit more like Avid Media Composer on a few things that even Autodesk calls "gotchas,” such as your playhead in the clip-preview window acting as an implicit in-point. However, once you get used to these, the learning curve on Smoke is extremely quick.

ItÃÂs also a full editing package with a node-based compositor built in.

Smoke 2015 includes the standard transition set complete with the standard SMPTE (Society of Motion Picture and Television Engineers) wipes. Moreover, you can easily (VERY easily) customize transitions. They appear on the timeline just as transitions would in any video editing software, but the customization interface makes it obvious they are handled as a composited effect on the back-end. For instance, say you want to use a logo-shape as a wipe element. Easy as pie and quick as a lightning bolt: open the effect panel for a wipe transition, and you can easily change the shape and path of the vector used for the wipe and save it as a favorite for re-use. This makes creating graphics packages for any project simple and fast without the need to jump back and forth between After Effects and your editing software.

Using ConnectFX within Smoke 2015 is simple, and very cool. Granted, it doesn’t replace Nuke — it's more light-weight than a fully dedicated node-based compositor — but compared to other video editing software packages, Smoke 2015's ConnectFX is extremely powerful. Most things that would require shifting from Premiere Pro to After Effects (or Media Composer to Avid DS), can be done directly from within Smoke using ConnectFX.

As stated before, most people think of Smoke as a finishing package, and of course, it shines here, as well.  The color correction tools — especially the Color Warper — are formidable. Moreover, they are simple to use.  The Color Warper has an embedded histogram, and this makes altering your colors, contrast and looks effortless. If you're in the Adobe world, you could think of the Color Warper as Curves, HSV, Brightness/Contrast and Tint all in one effect.

Although using Smoke 2015 feels like a breath of fresh air (easy, fast and extremely stable), no video editing software is pure greatness. The biggest, most blazingly obvious limitation is that Smoke can only be used on a single monitor. WHAT?! The idea of limiting an editing package to a single-monitor computer seems outdated, and quite frankly a bit ludicrous. We tested on a massive Mac-Pro with two huge UHD monitors, yet only one could be used. Most assuredly annoying. However, once past the initial visceral response to this limitation, we tended to forget all about it while giggling at the power at our fingertips.

Smoke 2015 is also unfortunately a Mac-only package. With the turn Apple has taken in the last few years toward catering more to the consumer electronics market than the professional production market, it would be nice to have the alternative to work in PC or even Linux-based environments.

Finally, a user cannot specify the working hard drive from within the Smoke interface. You'll need to open the Smoke utilities application and add all of your working and project folders to make them options from within Smoke. It’s a bit of a roundabout way of setting things up, but if you're working in a multi-user editing house, this can make workflows a bit more streamlined. So is this a limitation? That's debatable, and depends on your company's workflow.

Autodesk Smoke 2015 is incredible video editing software. Its price may be steep, and it's subscription-only, but this package is incredibly powerful, and more important, it’s stable. Not one crash.  Not one hang. We threw everything we had at it, and it just kept taking it. In short, Autodesk Smoke 2015 allows the creativity to flow: seamlessly, quickly and nonstop. It's easily one of the best products on the market in the editing world, and we look forward to seeing what the Smoke community creates with it.