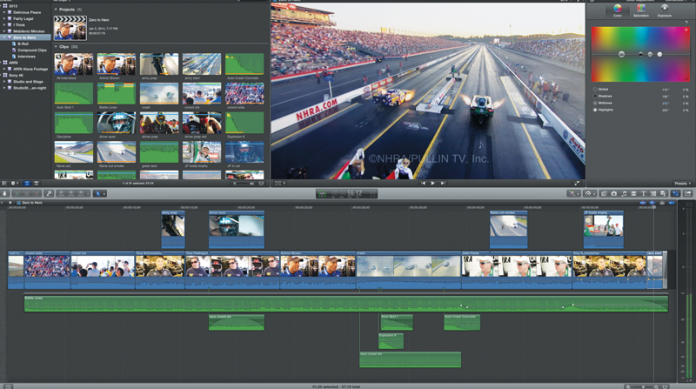 When Apple unveiled Final Cut Pro X back in April 2011 at a National Association of Broadcasters event, many in the audience were stunned and impressed by the overhauled user interface, the robust additions that made better use of newer hardware and operating system technologies, and for showing how the current paradigms in video editing software could be changed for the better. After releasing the software in June 2011, Final Cut Pro X received a fair bit of criticism for not including many long-standing features from Final Cut Pro 7, including support for multicam editing and XML/EDL imports/exports.

Over the past two and half years, Apple has released 10 software updates to Final Cut Pro X, most of them containing many returning features from Final Cut Pro 7 along with other new features, never before seen in previous versions of Final Cut Pro. The newest version released on December 19, 2013, version 10.1, includes many additions that prepare Final Cut Pro X for the future of video of production and help to make a video editor’s job a little bit easier.

After several years of waiting, Apple finally released the new Mac Pro with vastly superior hardware to the previous model and Final Cut Pro X 10.1 has several improvements to help take advantage of all that power. Version 10.1 has been optimized for better playback and rendering using the dual graphics cards available in the new Mac Pro, and there is now support for video monitoring up to 4k via the Thunderbolt 2 and HDMI connections on the newest Mac models. Final Cut Pro X 10.1 reinforces support for 4k by also including new 4k versions of titles, transitions, and generators that can be used in your 4k projects.

One of the biggest changes in Final Cut Pro X 10.1 is the way that it handles the user’s Libraries. In previous versions, there was no easy way to ingest footage from your cameras to any storage location outside of your Event’s storage location. In version 10.1, you can now ingest media to any mountable storage location including SANs or other network storage. The Libraries themselves have also been converted to an all-in-one format, storing the event and project files (and the events’ footage if it is not stored somewhere else) inside a single file that makes it very easy to share with others.

This is also great because you can close any open Libraries in the Browser (formally Event Browser) when you are done with them, cleaning up your workspace and allowing you to safely eject removable media that may have stored those Libraries.

There have also been some improvements to previously added features. The multicam feature has been upgraded to allow detaching audio from multicam clips to allow separate manipulation of the video and audio tracks. You can also perform video- or audio-only edits with the timeline tools on multicam clips. The replace and retime tools have also seen a few improvements, allowing you to perform a replace and retime in one step, create more precise retimed edits by entering speeds numerically with the keyboard, and there is now a non-rippling retime option.

Final Cut Pro X 10.1 also includes an automatic Library backup feature which backs up the Library metadata to any location, including network locations. In addition to full Library backups, there is also the option to create project snapshots, which are essentially a copy of your edit with a time stamp attached that you can return to later.

One old favorite from pre-X versions of Final Cut Pro that made its return is the ability to remove "through edits" and an indicator that shows where they are in your timeline. The user interface has also gotten a little more streamlined and flexible, allowing you to hide the Browser window in addition to the Libraries drawer.

Final Cut Pro X 10.1 has a truly gorgeous interface that makes even complex timelines appear simplistic. It allows the editor to get back to what’s really important: the content. With all the buttons and dials out of the way, your content becomes the star of the timeline. You don’t have to worry about accidentally knocking items out of sync with the magnetic timeline features that link relevant clips together and you can combine complex sets of clips together into compound clips to reduce clutter on the timeline. The brilliance of these features is that you can have timelines that still have complexity, but by designing the interface in this way, Final Cut Pro X is approachable in a way that has never been seen in professional video editing software. Granted, sometimes the interface is so streamlined it can still be difficult to find the exact feature you are looking for, but the help menu will usually highlight a feature in the menu system when you search for something, or give you more information in the help files.

With the new Library management, the previous challenge of managing your Events and project files becomes rather straightforward, especially if you elect to store all your video assets within your Library files. The background rendering system works great as well and it’s always a joy to return to your edit and find it fully rendered after stepping away for a few minutes.

Ten software updates later, Final Cut Pro X is really starting to feel like a polished and precise editing suite that should be an attractive option to several varieties of video editors. If you stepped away from Final Cut Pro since Final Cut Pro X was released, it is definitely worth your time to check out this new version. It’s very fast and has tremendous scalability whether you are throwing together quick dailies or editing together your cinematic masterpiece. Apple worked really hard to update and improve Final Cut Pro X, bringing you the tools you need to succeed as a professional video editor. With all the recent improvements and a very competitive price point, Final Cut Pro X 10.1 is a force to be reckoned with in the video production industry.