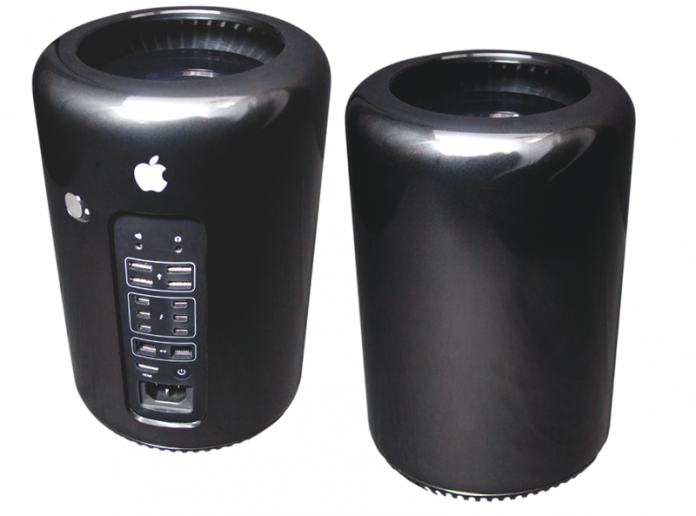 In June 2012, a Mac user decided to write a letter to Apple’s CEO Tim Cook asking about the state of the Apple Mac Pro, which had seen minor and infrequent updates since 2010. Cook responded by saying that "we're working on something really great for later next year." As the months went by, many speculated on what this new Mac Pro could bring to the table besides the usual updated hardware components. After a grand debut in June 2013 at Apple’s Worldwide Developer Conference and many months of waiting, the new Mac Pro is finally here!

More Than Meets the Eye

When we first unboxed the Mac Pro, we didn’t quite believe that the listed specs could possibly fit in this radical shift in enclosure design. Our test unit came nearly fully loaded with an 8-core Intel Xeon E5 processor, 64GB of memory, Dual AMD FirePro D700 graphics cards with 6GB of VRAM each and a 1TB PCIe-based SSD. If the previously listed specs weren’t enough to blow your mind, then imagine all of this computing power squeezed into a cylindrical aluminum enclosure that is 6.6-inches in diameter, 9.9-inches high and weighs 11lb.

The I/O ports all fall on a single faceplate on the side of the cylinder and include four USB 3.0 ports, six Thunderbolt 2 ports, two Gigabit Ethernet ports, an HDMI 1.4 port and headphone and analog/optical audio out jacks. Using the six Thunderbolt 2 ports, you can connect up to six Thunderbolt displays or even three 4k displays. One nice touch is that the I/O panel lights up whenever the Mac Pro is rotated to help the user find the port they are looking for when connecting a new device. The new enclosure has a shiny, polished look that is flashy, but still professional and begs to be displayed on your desk rather than under it like so many computers.

Even though the enclosure on the new Mac Pro has changed dramatically, the ease of access to the internals has not.  By sliding a single switch above the I/O ports, the entire cover on the enclosure slips off, allowing easy access to the SSD, memory and other components for future upgrades. One other notable mention is that this is the first computer made by Apple in quite a while that is assembled in the USA.

The new Mac Pro sets a new precedent for speed right from the get go, booting up in an average of 9-10 seconds. Taking advantage of the Intel Xeon processor and solid state storage, everything from application startup times to large file transfers on the Mac Pro are extremely fast and responsive. With 64GB of memory and eight CPU cores, it didn’t really matter how many applications we had open or how many tasks we were trying to do at once; the Mac Pro never skipped a beat. Apple’s Final Cut Pro X flies on the new Mac Pro, showing off background rendering and exporting speeds that are very impressive. The performance was so smooth while skimming through 4k footage and adding complex filters to clips in the timeline that we thought we were still working with SD footage! The SSD performance is also exceptional; using the Blackmagic Design Disk Speed Test, we saw average read/write speeds of 885.8MB/sec and 965.8MB/sec respectively.

With all this power enclosed in such a small space, you’d think that the new Apple Mac Pro would produce a sound similar to a jet during takeoff, but that assumption would be incorrect.  In fact, the new Mac Pro is one of, if not the quietest desktop workstation we have ever used. Using a single, well designed fan, this Mac Pro produces an astounding acoustic level of only 12dB at idle and only slightly higher when under load. Even after several hours of testing, the only time we ever heard the fan in the Mac Pro was if we positioned our ear a few inches above the enclosure, and even then, the moving air made more noise than the fan itself. This is made possible by the unified thermal core that has the CPU and both graphics cards using a single, triangular shaped heat sink, greatly reducing the space and number of fans required for proper heat dissipation.

While the new Apple Mac Pro is an absolute joy to use, it is not completely without faults. We would have liked to see a keyboard and mouse included for the price.  And speaking of price, you may be in for a bit of a sticker shock if you’d like to add some upgrades to the base model. While the base model starts at $3,000, the unit we tested will set you back $8,100, not including a monitor. Because the Mac Pro is very forward thinking, it may cause issues if you are using older equipment. You’ll want to make sure you can still connect all of your existing equipment to the Mac Pro’s relatively sparse legacy I/O ports. You won’t find any FireWire, DVI, or audio input connections on the new Mac Pro, although there are third party products that use Thunderbolt to add these connections. Also, if you need an optical drive, that will be an extra purchase as well.

The Mac Pro is a stunning revision to the classic computer design philosophy that has been used for many, many years and the results are truly fantastic. Mac users now have a state of the art computer to handle all their professional needs that can live conveniently on your desk and not drive you insane with loud acoustic levels. It may be a bit pricey, but if you spend long hours at your workstation the speedy performance is well worth the price of admission. If you are a Mac user and want the fastest, quietest and most powerful computer that Apple has ever created, look no further than the new Apple Mac Pro.