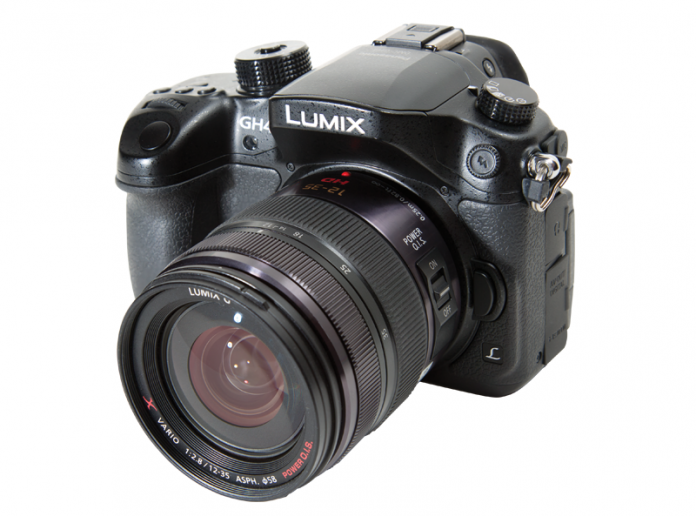 With so many different camera options out there, manufacturers are getting resourceful in their fight for your camera dollar. The Panasonic DMC-GH4 is one heck of a camera and it’s sure to capture a wallet or two. It’s a mirrorless, interchangeable lens camera and its claim to fame — 4K!  With an impressive range of recording options and fast data rates, the resolution isn’t the only thing that makes this camera commendable. And let’s not forget that it’s also capable of shooting stills, coming in at 16mp with fast 49 point auto focus. While shooting 4K is certainly its key stand out feature, there is so much more packed into this small form factor.

The GH4 looks just like the GH3. Other than the name on the body, you’d be hard pressed to find many differences. Just like the GH3 it has a great feel, and is easily operated.

The weight distribution and its comfortable grip make shooting handheld a breeze, and it feels stable and natural when you hold it. The body’s front and rear frame are made of die cast magnesium alloy. It feels really stout and ready for professional use on a daily basis. It’s weather sealed and it’s shutter is rated at 200,000 releases.

With a camera this size, you would guess that there are a few drawbacks. It lacks quality audio inputs, has weak audio meters and video output capabilities. However, with the optional LUMIX DMW-YAGH grip, Panasonic addressed these issues, making the GH4 something to be reckoned with. The grip integrates well with the camera, and offers HD-SDI BNC output, 2 XLR audio inputs and easy-to-read audio meters. The GH4 with the grip challenges full blown 4K professional cameras with much higher price tags. However the grip comes with a larger price tag than the body itself. But together, at a price of  MSRP $3699.98, it rivals cameras in the $15k-$25k range.

It’s amazing how many DSLRs have fixed rear mounted viewfinders, but with the GH4’s flip out monitor it takes a huge advantage over others in its class. When you’re shooting, it’s always a bummer to have to contort your body just to monitor the shot because of glare off the viewfinder.

With the ability to flip and tilt the 3 inch rear LCD monitor, the shooter is able to find a comfortable viewing angle no matter what the situation. Taking it one step further, Panasonic made the rear viewfinder with a touch screen interface — this along with other intuitive button locations makes the GH4 truly a fun camera to operate. The live viewfinder or LVF is also an LCD, and like the rear monitor has a contrast ratio of 10,000:1. Plus, switching between the two viewfinders is simple — it does it automatically with its eye sensor.

There are many updates with this camera, but just like with the GH3, the GH4 offers WiFi connectivity. Integrating NFC for WiFi connectivity allows you to control remote photo and video shooting with the Panasonic Image App. It will also embed location information to your photos after they’re taken; now thats some cool metadata!

As an editor, it causes one to shoot differently – and on the other side of the coin – as a shooter it causes one to edit differently. Adding photo styles used to be something considered during post, but with the built in picture profiles, you can have creative control in the camera that allow changing saturation, sharpness, noise reduction and hue. The GH4 also offers premade styles — standard, natural, vivid, monochrome, portrait, scenery and one for your own custom settings.

One of the big things that stood out to us was that a few photo options that the GH4 offers are now weaker than its predecessor. Now instead of shooting 16.2 megapixels, it shoots 16.1mp. It’s understandable, because the video options have become so much greater, a little give and take had to happen. After all, who wouldn’t lose a few features to be able to shoot in 4K? You also lose image stabilization, however if you have a lens with IS, then it's not an issue. And lastly, although not directly a photo option, the GH4 comes in slightly heavier than the GH3 by 10g, weighing 560g.

Many new cameras are now offering better focus control. Going with that trend, Panasonic is now offering 49 focus points over the 23 on the GH3. With better focusing, comes faster focusing with high speed autofocus. Dubbed high-precision Contrast Auto focus integrates DFD or Depth from Defocus technology, allowing bursts of 12 frames per second in AFS mode. 12fps is a huge increase from the GH3, where its best was only 6fps. But more pictures faster means your battery won't last as long. Touting 500 pictures per battery, take too many pictures too fast, and you’ll be scrambling to find a wall outlet.

Shutter, ISO and dynamic range have all been upgraded as well. With a maximum shutter of 1/8000s and minimum of 60s the GH4 doubled the max of the GH3. The ISO sensitivity however has suffered with a max of 6,400 ISO over the 12,800 ISO from its predecessor, unless you’re talking about extended mode where the range is ISO 100-25600.

When putting the camera through the paces, one would expect a little learning curve. However, with an intuitive menu, button layout and overall feel, it was a cinch to get great looking video on the first attempt. The viewfinder was easy to see and maneuver. For this review the Panasonic – Lumix G X Vario 12-35mm f/2.8 Asph lens was used.

The first test was just shooting 4K in natural light (no supplemental lighting), to see what it could do. We shot a child watching TV in a room with a few windows during his morning cartoons. The picture was sharp, however, at ISO 800 there was more grain than one would wish for. This is a bit of a concern because when shooting on similarly priced cameras (such as the Canon 7D), grain isn’t introduced until ISO 1600 and above. Once we properly lit the scene, the grain wasn’t an issue. The 4K is such a cool feature to use, but what’s the catch? The big challenge for this camera is the dynamic range. The Canon 5D Mark III offers around one stop of extra dynamic range and it wasn't hard to see the difference. Being that the 5d offers a full sensor and the 4/3 sensor in the GH4 has a crop factor of 2.3x (when shooting in 4K), the difference in dynamics is easy to see. To test this, we shot the exterior of a home, that had both very bright, full sun areas and dark areas with high noon shadows. The exposure choice was made for the middle areas that were neither in full hard shadow nor full sun. There was still plenty of information in the dark shadows, but the sky and the roof of the home were overexposed. We also tested this by shooting a subject inside the home, facing toward the window with the sum beaming in. This is always a tricky process if the windows aren’t tinted or filtered and the room doesn't have an abundance of natural light. There just wasn't enough dynamic range to shoot the outside in perfect exposure and not have the inside dark or have the inside correctly exposed and not have it look like heaven on the other side of the glass. To fight the complexity of the shot, evening the exposure by illuminating the inside helped a lot, but still didn't do it completely. However one would be hard pressed to find any camera that did this well, as its a very difficult shooting situation. Lastly, we shot in a shaded area outside. The camera performed brilliantly. With an abundance of diffused light, the shot came out great. On a side note, the focus ring on the 12-35mm f/2.8 was extremely smooth and allowed for an easy rack focus. The focus assist came on automatically, allowing the shooter to have no doubt the scene was sharp and crisp.

Taking the 4K footage into an edit system, it became very apparent how nice it was to have the extra resolution at our fingertips. Shooting in MOV mode, the video was easily imported into Adobe Premiere CS6. Although some formats tend to create dropped frames in playback as it attempts to keep up, the 4K MOV from the GH4 previewed smoothly and allowed for a lot of flexibility. Posting in a 1920 x 1080 sequence, it was nice to have the option of cropping a shot to exclude something, or allowing for digitally zoomed in close up with no resolution loss. This made it very easy to create a dynamic cut without having the need for a wide, a medium and close shot of the same subject.  The footage took color correction well, and in one shot, adjustment of the white balance did not affect the quality of the shot in any way.

If you look at GH4 footage versus the Canon 5D Mark III, the picture quality is very comparable when shooting 4K on the GH4 (then down converting it to 1080). Of course, the full sensor of the 5D fully out-maneuvers the cropped sensor of the GH4. However, in sharpness, detail and quality of picture, they are very similar. The GH4 is smaller, and feels quite different. The 5D does not offer 4K and doesn't even come close to offering the same amount of frame rate options. But the huge difference is their price tag. The Canon 5D comes in (body only) at $3,399 whereas the Panasonic GH4 (body only) is just $1,699.99, and shoots 4K. And compared to its little brother the GH3, the price tag has jumped quite a bit from the original MSRP of $1,099.99 — but it’s worth every penny.

For its price tag, shooting 4K, rugged build quality, ability to expand using the Panasonic Lumix DMW-YAGH grip interface (MSRP $1,999.99) to include XLR inputs, better mic pres, audio level meters and HD-SDI BNC connectors, this camera can truly be a full pro rig for very little coin, especially if you compare it to the other cameras with the same capability. All that and its one killer photography camera too.  If you're in the market, have a limited budget and it’s options you're looking for, Panasonic has you covered with its highly flexible and cost effective GH4.