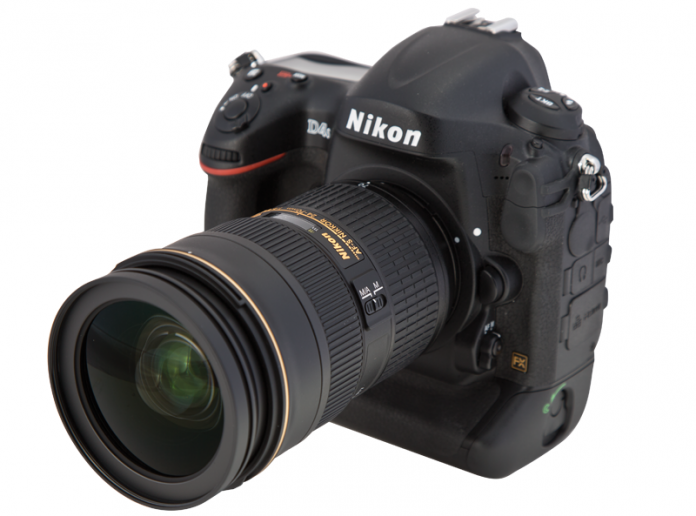 Click here for the full video review and test footage.

Ever struggle with a subject that won’t stop moving? Fast moving subjects are difficult to capture, but when it comes to capturing that special frame, having a camera that can shoot fast is key. Nikon upped the ante with the upgrade to their flagship model. The predecessor to the D4S, the D4 was released in 2012 and is a superb camera. But with all technology, it’s always evolving and improving. The D4S has quite a few important changes. Starting with the ISO range, you get double the range with the D4S versus the D4 at ISO 25,600. When shooting continuous with AF the D4S shoots 11fps, one frame more than the D4. The battery life is about 16 percent greater, taking 3020 shots per battery when using the EN-EL18a battery. The video options have been expanded as well, now shooting 60p in full 1920×1080. The Canon EOS-1D X is Nikon’s big rival to the D4S. They are equally equipped and very similar cameras, down to their cost. The D4S is $6,500 and for this review, the Nikon AF-S NIKKOR 24-70mm f/2.8G ED was used. It costs $1,890.

This baby has your ticket to fast professional performance.

This is definitely a professional camera. With its extensive options and price tag, we doubt many hobbyists will be picking up this camera. However, for the pros, the quality of the product it produces, and the ability to shoot stunning video and photographs, will quickly help the camera pay for itself. The super-fast 51-point autofocus with 3D tracking is perfect for sports and the ISO range makes the camera very versatile, although the expanded ISO at 409,600 is a bit absurd. The photographs taken at that ISO are so noisy, we can see it only being useful for espionage. There isn’t any Wi-Fi connectivity unless being used with the WT-5A wireless transmitter accessory ($875). However the speed of the Ethernet port is now 1000Mb/s over the 100Mb/s with the D4.

You now have the option of shooting both CompactFlash and XQD memory cards. The image sensor is “specially designed,” 16.2MP FX-format CMOS. The processing is new with the EXPEED 4, up from the D4’s EXPEED 3. Last, but not least, is the built in time-lapse controller mode. The D4 had this option, but now you aren’t limited to 999 shots but 9,999.

Picking up the D4S, you’ll notice it’s quite hefty. The body alone is 41.6 ounces or 2.6 pounds. That compares to the Canon 1D X body at 54oz. or 3.4 pounds. With the lens and battery the D4S is a whopping 5lb. and 3.1oz. The body is magnesium alloy and fully weather sealed. Both of the handgrips have been redesigned. Vertical and horizontal grips feel nice and are very comfortable.

On the right side of the camera, there are all the ports. They are smartly laid out, with all but one having their own rubber flap. The mic and headphone port share one, but if you're miking something, you ought to be monitoring it, so we don’t see this as an issue. The battery locks in, and on a silly side note, has a fun PAC-MAN picture on the side (not really, but it looks like it).

Mounting the lens is easy and offers the Nikon F mount. With the press of the Pv button, you can see the effects of the aperture. It shoots in continuous autofocus with 3D tracking, Group Area, single point, 9-, 21- and 51-point AF. The 51-point AF even follows and changes every frame during bursts.

When shooting, you can use the viewfinder or Live View using the screen on the back of the camera. A simple press of a button toggles between the two. Part of that same button allows you to change from video to photo mode with the flip of a switch.

The operation buttons differ depending on how they are assigned. We prefer shooting in manual mode, as it gives us the most flexibility and control. When shooting in manual mode, your trigger finger adjusts the f-stop and thumb adjusts the shutter speed. To operate the ISO, you must hold down the ISO button. While the trigger finger changes ISO from manual to auto, the thumb adjusts the ISO up or down. The record button is in a handy location, but is surrounded by other buttons and is small, so it can be easily lost.

Putting It Through the Paces

This camera has so many functions, there were many tests to be done. Let’s start at the beginning. If you were picking up the camera for the first time,  and not familiar with where Nikon puts its buttons, you will find that they aren't that intuitively laid out. Some of the buttons are small, some need to be pressed and used with others. Their layout is less than desirable. To change the ISO you need to hold the ISO button down and scroll with your thumb, but to change it from manual to auto ISO, you hold down the ISO button and scroll using your index finger. However when not pressing the ISO button, the scrolls change to controlling the f-stop and shutter. Even someone that doesn't normally struggle with buttons and menus might find themselves frustrated with how these function. Because of this, until you become familiar with where everything is and how it functions, it might be hard to get a  great frame. The light meter is easily viewed through the viewfinder, however when the camera is in live view, the light meter isn't there, instead its on the top of the camera, and isn’t conveniently viewed.

The D4s’s AF was very fast and adaptive to a moving subject and shoots stunning photos. To test this, we shot a fast moving subject; a young child. Like most children, our subject moved a lot, and was the perfect subject to test the AF and the continuous shooting. Quickly it became apparent that this camera is fast! Its amazing at how well it keeps up. Testing its speed, taking frame after frame, it responded well. We began shooting in RAW mode, shooting only NEF files. But because we weren't going to do any post processing to the pictures, we changed it to shoot only JPEGs to save storage space.

Although the child moved a lot, their top speed wasn't great, so we moved on to shooting fast  moving traffic off the highway overpass. It was a sunny day, so we could shutter up, allowing no motion blur to each car. They were moving at roughly 60 mph, so unless you’re shooting a rocket, their speed should suffice for a fast moving test subject. Just as with the child, the adaptive AF worked wonderfully and it shot continuous frames very fast. Take note though, the shutter is very loud. Thats not always an issue, but could be distracting, depending on what and where you are shooting.

Next, we moved on to the video side of the camera. we were quite excited to see that Nikon added the 60p option in 1080. Most DSLR’s out there only shoot 60p in 720, causing one to need to post their project in 720 if they required slow-mo, or want a real life feel. For smooth slow-mo, shooting 60p works great. Just forcing the frame rate to 24p from 60p makes for great slow-mo at 40 percent speed. If you intend to shoot news or reality TV, 60p would fit the need. if you desire the Cinematic feel, then shoot at 24p.

We then tested the monitor, mounted flush on the back of the camera. Turning on the monitor is simple. Nikon calls it Live View. press one simple button and you’re monitoring with the screen. Using the menu isn't difficult as well; if you want to change the frame rate, it’s easy to find and maneuver. Testing in all five 1080 frame rate options, we found that the dynamic range of the full sensor was nice. When shooting both very bright and dark areas in the same frame, exposing so you can see each, the bright wasn’t too bright and the dark wasn’t too dark.

When using a tripod, we mounted the camera to the plate of a Sachtler FSB 6 head. We noticed right away, that if using the camera for video, that some of the design for photography would become more cumbersome. If shooting pictures in portrait, the plate is in the middle of the grip. But that’s what happens when you shoot video on a photo camera, or photos on a video camera. Next, we shot handheld, experiencing the balance of the camera. When shooting handheld the balance isn’t the best. However, most DSLR’s are not balanced like a video camera and are less than desirable when shooting handheld.

Because the AF is so fast, we didn’t notice that the focal point was changing when shooting video. When shooting pictures, this was wonderful, however when shooting video it just changed so rapidly, that it didn’t feel right. However it’s easy enough to overcome; just turning the AF off solves the issue.

To test the different frame rate options, we shot a foosball table, spinning the little men around, dollying past and testing slow-mo. There wasn’t any surprises, the video came out just as expected. The dynamic range was great, and the picture was clear. We slowed down 60p and 50p to test how they looked when converted to 24p for slow-mo. If the movement was too fast, we got rolling shutter (as expected), otherwise it performed great.

Deliberations are over. What’s the verdict?

Over all, the camera performed wonderfully. If you’re thinking about buying this camera, we only have a few reservations. The first thing to note is that it only has a ?" stereo jack for audio. Knowing that this is a photography camera first, this makes sense, but if it was designed with an XLR input, the usefulness of this camera for pro videographers would grow greatly. Second, the controls could use some more intuitive design, however some time with the camera would solve that. Lastly, because of its cost, and being Nikon’s flagship, we would hope that there would be a 120p frame rate option, and there isn’t.

The video and pictures look great. As one would expect from Nikon’s flagship model, it performed wonderfully. However, would this reviewer buy one? Probably not, but that is only based on the feel and non-intuitive button design. If you get a chance to get your hands on one, pick it up, get a feel for the buttons and layout. The Nikon D4S, where ‘S’ must stand for speed!

Great camera for pros, not prosumer at all. Fast, with great quality photo and video.