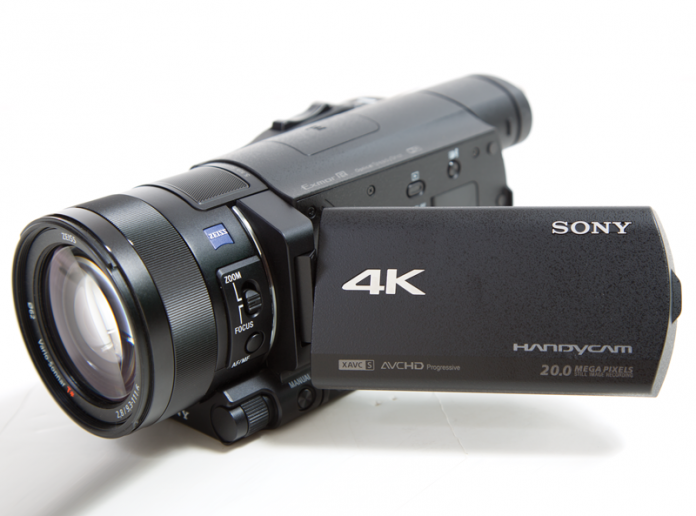 Sony’s Handycam line has been around since 1985 and a lot has changed since then. In this new digital age, things seem to get smaller, faster and less-expensive at an unprecedented rate. With the 4K revolution in full swing, professionals and consumers alike are clamoring to get their hands on equipment that takes advantage of the extra resolution and detail that 4K footage provides.

One of the biggest issues preventing more widespread adoption of 4K is the fact that most 4K equipment is expensive and usually has a steep learning curve to operate. Also, most high-end 4K camcorders record at very high bitrates, which require more media storage, further increasing costs. Sony’s FDR-AX100 Handycam camcorder fills the gap between professional and affordable, recording 4K UHD video, using the efficient XAVC-S codec and is not much larger than Sony’s previous flagship Handycam models. The price point and ease of use helps to lower the barriers of entry for consumers and professionals to start using 4K workflows while seeing all the benefits it can provide.

The FDR-AX100 is in Sony’s Handycam line, which is traditionally aimed at consumers, but this camcorder has an appearance that oozes professionalism. The “4K” emblem proudly gleaming on the side announces the headline feature and the whole body looks fantastic. The high quality finish and texture gives off a professional vibe and the camcorder is well-balanced for a great feel in the hand. Keep in mind that this is not a camcorder that will fit in your pocket, nor would you want it to. Tipping the scales at 2 lb., the FDR-AX100 is definitely at the high-end of Sony’s Handycam line in size and weight, but it is still small and light compared to Sony’s larger professional 4K camcorders. The lens hood and cover on the front are solid and can be easily removed and installed.

Holding the FDR-AX100 with the built-in strap is comfortable and the controls for taking photos, starting, stopping recording and enabling the focus magnifier are within easy reach. There is a variable zoom rocker on top that is easily operable with the gripping hand. On the back is a retractable and tiltable viewfinder and controls for the three built-in ND filters, including an auto-enable switch. The battery is mounted far enough from the tripod mount that it can still be removed when attached to most small-to-medium-sized tripod plates. On the left, you’ll find the 3.5-inch LCD touch display and below it are buttons to enable manual modes for iris, gain/ISO and shutter speed. There is a small dial toward the front to manipulate settings while they are set to manual mode. Above the manual dial is an auto/manual focus button and a switch to change the large lens ring between controlling focus or zoom.

When the LCD display is open, it reveals a single SD/MS card slot and buttons for switching to playback mode, enabling NightShot, and changing picture parameters. On the top there is a built-in 5.1-channel surround microphone and a hot shoe for mounting powered accessories.

Overall, the FDR-AX100 does an excellent job of fitting all of its features into a small and substantial chassis that is easy to hold and operate.

We took the FDR-AX100 out to shoot the flowers and plant life that spring has brought about and we were very impressed by what we saw. The 3.5-inch LCD panel has a high resolution and is easy to see when facing direct sunlight. The LCD display is also a touch screen, which is used to navigate the menu system and make changes to the configuration. On the home screen, there are touch buttons for starting recording and zooming, as well as a plethora of icons indicating the various settings of the FDR-AX100. Some of these settings only show up momentarily when first starting the camcorder, but a press anywhere on the screen will bring them back and they can be touched directly to bring up options for that function. This works pretty well, as it leaves your display uncluttered with settings information that you don’t need while recording. The menu system itself is a bit difficult to navigate as it is organized into categories that can be confused for each other when looking for a particular feature. It is also frustrating that you can go three levels deep in the menu system, make a selection on one setting, then get kicked all the way back to the top level of the menus, having to drill back down if you wanted to change a second setting in the same area. There is also an adjustable viewfinder that is sharp and bright. The viewfinder can be used for critical focus and is perfect for when you don’t want to disturb others with the brightness of the LCD display.

The Zeiss lens and Exmor CMOS sensor combination on the FDR-AX100 produce a picture that is sharp and full of vibrant color. The relatively large sensor helps to create a shallower depth of field when used at the lesser f-stop values of the lens. The lens has a 12x optical zoom, which is controlled by a variable rocker on the grip. The rocker button is little and has a small amount of travel, so it requires a delicate touch if you want to zoom slowly. While the image is very clear at all focal lengths, it should be noted that we saw some pretty serious rolling shutter skewing when panning at moderate speeds while zoomed in. The lens ring has just the right amount of resistance and works very well for controlling focus and zoom, although we thought it was more valuable to control focus as the zoom rocker works better for smooth zoom movement. Focus can be made easier using the focus magnification feature which takes advantage of the LCD touch screen wonderfully.

After pressing the magnification button, you are asked to touch the area of the screen you want magnified and even after magnification, there are arrow buttons to move the area of magnification around the frame. The autofocus worked pretty well most of the time, but there were occasions when we zoomed the lens out to the widest setting while panning and the camcorder would stay out-of-focus for several seconds before snapping back in. The FDR-AX100 features zebra stripes and peaking settings to help with adjusting focus manually and getting proper exposure levels.

The FDR-AX100 also features three built-in ND filters which help greatly when you are outdoors and want to use lower f-stop values in bright light. They can be set manually or there is an automatic function that will engage them when the smallest aperture is reached and the exposure is still too bright. The automatic ND filters worked pretty well in our testing, although there is a slight flicker to the image when the filter engages. The lens also features Sony’s SteadyShot image stabilization which definitely helped reduce jitter and vibrations when walking with the camera or using the telephoto end of the zoom. However, when standing still, we saw the image stabilization exhibit some odd behavior, snapping to and fro rather than gently gliding as most optical image stabilization does. This was only noticeable at the long end of the zoom lens, but it is something to note if you plan on relying on telephoto handheld shots.

One of the best things about the FDR-AX100 are the manual adjustment controls which allow you to control the iris, gain and shutter speed individually. After pressing one of these buttons, you use the small manual dial to adjust the setting. If you’d like to change a different setting, simply press that button, then adjust it with the dial. There is also a Manual button that can be long-pressed to assign settings including exposure and white balance. This setup for manual adjustments worked pretty well for us when we got the hang of it, but you have to be careful to see which function you are currently manually adjusting before you press any buttons. If you press the button for the currently selected setting, you can accidentally kick the setting back to automatic, which could ruin your shot.

The FDR-AX100 features a 1-inch sensor and performs pretty well in low-light, but gain can be added when there isn’t enough light to properly expose the image. Adding gain also adds noise to the picture, but it isn’t very distracting and doesn’t affect the color levels as much as we’ve seen in other camcorders that are similar in size and price point. There is also the NightShot feature, which uses an infrared emitter to see in total darkness, though the color is heavily affected. It is worth mentioning that the lens hood should be removed when using this feature as it casts a shadow on your subject when using the infrared emitter to illuminate your scene.

There is a built-in 5.1 channel surround microphone that has several manual settings that are usually found in more expensive, professional camcorders. There are settings to control the audio levels manually, reduce wind noise, make the microphone behave more directional and even try to cancel out the voice of the camera operator. It should be noted that the 5.1 channel recording is only available when using AVCHD; XAVC-S modes record in stereo.

One interesting feature of the FDR-AX100 is the built-in Wi-Fi capability that allows you to transfer video clips to your mobile device for instant sharing or use your mobile device as a remote control. In order to transfer video clips, you have to have enabled the Dual Recording feature which produces low bitrate MP4 files, in addition to the full-size video files when the camcorder is recording. The Sony PlayMemories Mobile app is available for both Android and iOS and is free to download.

While our experience with the FDR-AX100 was mostly pleasant, there are a few issues that keep it from being perfect. The first thing would be to include an adapter for the built-in hot shoe so that you can attach non-powered accessories like a field monitor or an external microphone. The FDR-AX100 has one media card slot, but it would be nice to have two for being able to record continuously from one card to another or recording to both simultaneously for backup purposes. Perhaps the biggest issue we encountered during our testing was that the FDR-AX100 froze up a couple times when changing resolutions and frame rates. This left the top half of the screen garbled and required us to remove and reconnect the battery to get the camcorder to function again. Issues like this may already be addressed with firmware updates, but we thought it was worth mentioning.

Sony’s FDR-AX100 is a product that blurs the the line between professional and consumer equipment and does so in a way that favors both groups. It still feels like a Handycam in your hand, but the specifications and features make it behave more like a professional camcorder. It is affordable, small and easy to use, but also has a large sensor, a great lens, and tons of manual controls. If you are looking to jump on the 4K bandwagon but want to get a camcorder that is versatile enough to be used in both a casual and professional capacity, we highly recommend looking into the Sony FDR-AX100 Handycam camcorder.

Adam Vesely is a videographer/director of photography and still photographer.