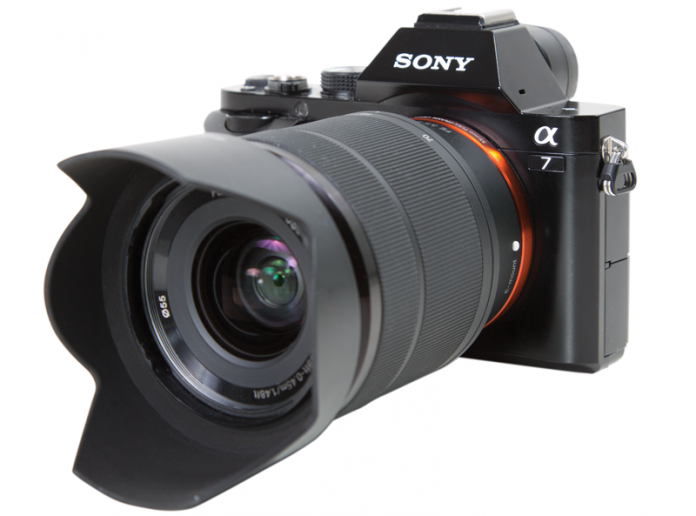 They say necessity is the mother of invention, and Sony’s Alpha 7 mirrorless interchangeable-lens camera (MILC) is living proof of that. For years, photographers and DSLR cinematographers have requested smaller and more capable cameras for digital imaging, which have been met with varying degrees of success. Now with Sony’s A7 MILC, it seems as if they finally have what they want: a fully capable, full-frame sensor camera that can mount professional lenses and still weigh in at less than a pound.

Interestingly enough, one of the best features of the standard DSLR design also doubles as one of its biggest drawbacks: the size. The A7 is no exception to this. In fact, by getting rid of the mirror and prisms found in most DSLRs, the A7 is actually the smallest and lightest of such cameras on the market today. As such, we found the size and limited depth of the hand grips to be comfortable, but less than ideal for shooters with larger hands. We also found the weight of the camera often made it difficult to keep the camera steady when the optical image stabilizer was turned off.

All of the major exposure controls on the A7 can be adjusted conveniently by independent dials found on the camera itself.

When it comes to digital imaging, small isn’t always a bad thing. Especially when you stop to consider how much Sony was able to pack into this powerful little bundle. We found one of the best features to be the three dials on the top and back of the MILC for controlling exposure. There is a top front dial that adjusts your aperture, a top back dial that allows you to change your shutter speed, and a back dial which gives you control over ISO. This means that unlike Canon and Nikon, all of the major exposure controls on the A7 can be adjusted conveniently by independent dials found on the camera itself, a surprising bonus given the lack of real estate on the MILC’s body.

Even more surprising is that Sony also managed to fit a 3-inch tiltable TFT LCD screen on the back of the camera. Though the screen doesn’t have a full 180-degree range of motion, it does have enough tilt to allow cinematographers to shoot the kind of low and high angle shots that aren't possible with most DSLRs on the market today.

We were surprised to find that our favorite feature on the camera turned out to be the three customizable buttons on the back and top of the A7. These user-defined buttons can be assigned to do anything that the camera’s internal menu offers—from changing the quality of your photographs to toggling the color of the focus peaking from yellow to blue. We found that these buttons seriously cut down on the typical time we would spend thumbing through the menu system on DSLRs.

Though the A7 is as small as some point-and-shoot cameras, Sony still found a way to include all of the inputs and outputs that any cinematographer would expect while looking for quality digital imaging in a professional camera.

The A7 has a micro-USB port for charging and transferring footage, a micro HDMI port for viewing and recording images on external monitors, an 1/8-inch TRS input for external microphones, and an 1/8-inch headphone output to ensure that your audio recording sounds great. That being said, in a world of high-speed connections, we found it strange that Sony decided to use a USB 2.0 port rather than the much faster USB 3.0 standard, which would have sped up media transfers and firmware updates considerably. Even so, the fact that the A7 can also transfer images to a phone, tablet, or computer over Wi-Fi more than made up for this shortcoming.

Even more impressive is what Sony managed to do with the electronic viewfinder. Not only does it sit comfortably on the eye, but it also includes a whopping 2.4 million dot OLED display. With that kind of quality, we found that the EVF was almost as sharp as seeing the image in real life. The times we noticed any pixels were when viewing smaller text through the EVF. Otherwise, the image was clear and bright, no matter what subject we were shooting.

Like many of the top cameras on the market today, the A7’s battery resides in the right hand grip. However, unlike many of the top cameras, the small size of Sony’s A7 camera body means that it was designed with a rather small 1080 mAh battery. This resulted in a short battery life for the camera. In fact, we often found ourselves changing out the battery within a couple of hours of shooting. This, compounded with a lack of a battery charger, meant that we found ourselves having to plug the A7 into our computer through the micro USB port and wait several hours before the battery was fully charged. However, Sony does offer both an external battery charger for the A7 and a battery grip which most cinematographers will likely find the need to have.

It’s What’s on the Inside That Counts

Having a lot of external controls is great, but as everyone knows it’s the digital imaging inside that counts. That’s why it’s one of the biggest draws of the A7 and its full-frame sensor. This sensor allows cinematographers to shoot with the kind of shallow depth of field that most Hollywood films enjoy. In addition, the wider spacing of the photodiodes on a full-frame sensor often result in fewer mistakes making low light shooting much less noisy. Sony also improved its BIONZ X processor allowing cinematographers to shoot video at 1080p up to 60 frames per second. However to do this, the A7 relies on the efficiency of the AVCHD codec. Though it is nice to be able to record in the widely supported AVCHD codec, we would have loved to see Sony include an intra-frame codec option to make editing easier on our computer’s processor.

There are certainly a lot of features to like about the A7, but great features don’t always mean great video. We shot a number of challenging scenes with the A7 to see what it was made of.

First off, we absolutely fell in love with the multitude of visual helpers that Sony provided. The MILC comes with visual audio meters to monitor the volume level of audio, peaking and image zoom to help determine absolute focus, zebra patterns to find out which areas of the image are over-exposed or in low-light, and a histogram to tell whether or not there is enough contrast. Considering that it usually takes a hack to get these features in popular cameras today, it’s easy to see why we were happy to have them already included.

Overall, we were impressed with the video that the A7 produced. It was able to capture a lot of detail, even when shooting scenes with a high amount of contrast. Also, the optical image stabilization seemed to work quite well, making our handheld shots look as if they’d been shot on a tripod. That being said, we were less than impressed by the A7’s ability to shoot in low-light situations. We found that noise was clearly visible at 800 ISO and above, which made it difficult to shoot in anything but ideal lighting situations. Low-light problems aside, we were still very pleased at how easy it was to shoot with the A7. The video came out sharp and the visual indicators helped us make sure that each image came out looking the way we had envisioned.

By making the world’s lightest and smallest camera with a full-frame sensor and keeping all of the features of cameras for good digital imaging, Sony seems to have found a niche in the crowded camera market. Though there is still some room for improvement with its low-light and battery performance, the bevy of features that the A7 includes makes this camera worth every penny.

Dan Bruns is an award-winning cinematographer and editor, who has worked in video production for 10 years.