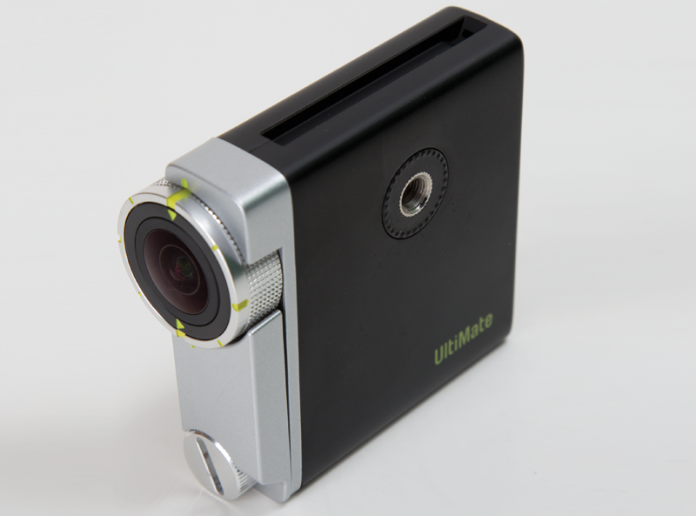 Unboxing the SOCAM UltiMate action camera is a bit like those Russian nesting dolls. There's a big box with three smaller boxes. It's a whole lot of cardboard to get to one action camera.

Standard with the camera are one battery, a charging cable, two sticky mounts and one splash proof case.

Before we go any further, let's stop there. Splash proof? It turns out that the "splash proof" case is a very minor layer of protection, giving the action camera water-functionality down to one meter. Yes … one meter. The splash proof case is held together with light-duty plastic pinch-clips (as opposed to the latches that GoPro and Contour use).

The footage from this HD video camera is far more compressed than a GoPro.  While the app will let you customize white balance and EV bias, there is no option like "ProTune". To the layman, GoPro's "ProTune" (similar to sRGB) may appear washed out, but let's take a moment to review this purpose. sRGB (or Standard RGB) is a color space that beefs up the gamma a hair so that you get more response in dark areas. This helps prevent mud in post-production. If you crush blacks on acquisition, it severely limits your ability to color correct HD video in post. By slightly washing out an image to a gamma somewhere in the neighborhood of 1.15 in camera, color correction can be done much easier in video editing software without turning dark areas into mud. Also, compositing will look better.  Although there is no advertised sRGB-type functionality, there should be.  When other cameras in this price range offer this functionality, SOCAM appears to be off to a slow start.

Furthermore, by using a high compression, the SOCAM UltiMate’s video is prone to create artifacts and poor dark areas anyway. It uses a standard MPEG-4 compression with the MP4 extension. This is a good mark as some of the lighter action cameras (such as some meant for radio controlled aircraft) use the AVI extension; making editing a complete pain to use in any video editing software. SOCAM UltiMate's MP4 files can be opened in many video editing software programs from Avid Media Composer to Vegas Pro from Sony Creative Software.

The SOCAM UltiMate has versatile mounting options. Like a select few action cameras, the SOCAM UltiMate has a standard 1/4-inch-20 tripod screw mount. From there, you can screw in the clip mount. However, this clip mount is a bit wobbly. It's designed a bit more like a backpack clip than like a camera mount. There is a lot of lateral play in the mount, and this can lead to some shaky video in true "action camera" circumstances, and make it quite difficult to unclip the camera from the mount.  To unmount you have to hold the camera centered on the mount while pinching to keep one side or the other from catching. Contrast this with other clip mounts that are smaller and solid, and you have a potential issue.

As for weight and form factor, this camera is stellar.

The SOCAM UltiMate lens is a 330-degree, rotatable lens to help you level your view whatever your orientation. Contrast this with Contour's 270-degree, or GoPro and Sony's fixed lens, and this is quite impressive. However, there are two arrows printed on the front of the lens, pointed in different directions that make this very confusing. It reminded this author of the Scarecrow in The Wizard of Oz pointing in two different directions, saying "that way." Even after reading the manual twice, at least half the video shot with this camera during a real-world shoot at a race track was either sideways or upside down. When you're on a shoot, you may be using five or six cameras, audio, lights, etc. … remembering the confusing arrow interface will be a bit rough. It's also counter-intuitive to where you think the arrows should be pointing. That being said, the image from this lens is clear, and very comparable to a GoPro field of view.

As for weight and form factor, this camera is stellar. We mounted it to just about anything with no issues. Radio controlled airplanes were a snap, using butyl rather than the clips. Just about any-sized plane could carry it because it's very light. Motorcycle helmet … no problem. The curved clips made that easy, and because it's not an un-aerodynamic box (like a GoPro HERO), your neck won't get tired because of wind resistance. Suction cup mounting the (using a Panavise 809) SOCAM UltiMate to the hood of a race car speeding down Thunderhill Raceway at more than 110mph yielded great results.

Much like other action cameras, the SOCAM UltiMate is Wi-Fi enabled, and utilizes an app to control, preview, and playback. It's a fairly easy and intuitive interface. However, don't attempt to use this feature if mounting the camera on a radio controlled aircraft. Wi-Fi is 2.4GHz, and this can interfere with many controllers and cause a crash.

Financially, buying a SOCAM UltiMate is not easily justified. When compared to GoPro’s HERO line, it would land somewhere between a White and Silver Edition. Accordingly, it's priced there. However, the lack of a truly waterproof case, no sRGB functionality, and substandard mounting hardware make it a non-starter. It's a great new style of camera, but it just doesn't seem quite ready for prime-time. If it cost less, we may say it's a great introductory camera to get into action camera shooting, but it is a camera for anyone wanting to try something new.

Ty Audronis is a media professional with over 20 years of experience.