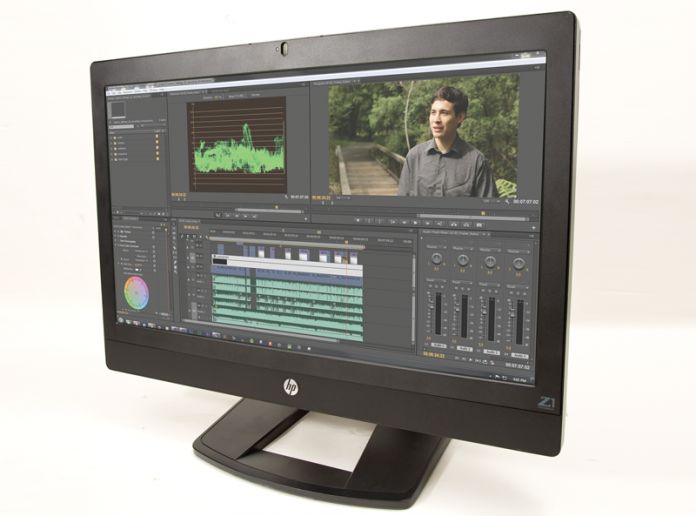 The Hewlett-Packard Z1 G2 is a new offering from HP to build upon its popular HP Z1 which was brought to market in April of 2012. Building on their stable and reliable platform, HP has included some new features which will make those involved in video production, engineering, computer aided design and architecture delighted with the improvements. If your production is mission critical, and stability and speed are your main concerns, the new Z1 G2 is your target video production system.

Unique to the HP Z1 series is the "service mode" which allows the user to tilt the screen back and flat, then with two latches, open the screen and produce the internals of the system. We IT professionals greatly value a system which is easy to access, as well as easy to upgrade; the Z1 G2 provides just that. Installing extra disk drives, upgrading a video card, or adding RAM is a breeze due to the thought process behind this service mode.

Though easily accessible, there is less room for upgrades than a traditional tower. For instance, there are four DIMM slots for memory within the chassis which allow up to 32GB of ECC or 16GB non-ECC unbuffered DDR3 1866MHz RAM. On many video production machines, there may be up to eight slots for RAM expansion. However, because of the unique combination of hardware and technology, the lack of memory expansion does little to sway us from believing the Z1 G2 is a video production beast of a computer.

In test after test and real-world video rendering, editing and post-production, we didn't see a drastic loss in performance as we would have expected.

Recently Videomaker has seen several new video production units which contain an Intel Xeon processor; this is no exception. Though there are options for the Intel Core i3 and the Intel Core i5 processors, the Xeon E3-1280 v3 quad core processor hits speeds of up to 3.6GHz with 8MB cache and a maximum turbo frequency of 4GHz. These speeds and number of cores are responsible for silky smooth video rendering and exporting that has the video editing community abuzz. However, the magic of the Z1 G2 isn't the DDR3 RAM, Intel Xeon E3-1280 v3 processor, dual 256GB SSD drives or the NVIDIA K4100M 4GB video card (you may find it listed as a high level 3D video card). The magic is the combination of all of these working together at what they were best designed to do. Many computer companies will pick the top products to integrate into their machines, but BUS size, cache, channels, etc. are rarely matched for optimal performance. So you might have an eight core 4.7GHz processor with 128GB of DDR3 3100 RAM, a 6GB GDDR5 video card, and a 512GB SATA III disk drive and not have anywhere near the same performance of this system due to the lack of matching capabilities and focus on stability.

As described above, the Z1 G2 test unit we received is not necessarily a video editing and post-production hot rod on paper, but we were impressed with the performance and stability which proved it to be a hot rod in sheep’s clothing. The Intel processor is among the fastest offerings from HP for the Z1, though the Xeon series has faster processors, the Intel E3-1280 v3 works well with its partners. One difference where we might expect to see a big gain for post-production users would be the disk drives. The inclusion of the mSATA SDD was expected to be a little bit of a letdown as there are so many other options which would be better for video editing and post-production. However, in test after test and real-world video rendering, editing and post-production, we didn't see a drastic loss in performance as we would have expected.

During testing we used Adobe Premiere Pro to render and export full HD video, while simultaneously watching full HD videos of the space shuttle blasting off, a downhill mountain bike race, and a tour through the rain forest. During this process there was not one bit of lag. The videos played wonderfully, the video rendering and export flew through its paces, and we even opened up Microsoft Excel, Microsoft Word, and Gmail to see if we could make a dent in the performance. No dice. The Z1 G2 kept up. The only time we were able to place any sort of load on it and see the performance decrease was while watching those three HD videos and exporting our own video. We started the Hyper PI benchmarking software which calculates the value of pi to whatever variable you set it to. We set it to four million digits. This wasn't fair. But we wanted to see what would happen. Little degradation in performance was seen and Premiere Pro said it was unresponsive for all of about five seconds. After we threw everything we had at the Z1 G2, it then kicked back and smoothly played the videos and exported the video file as if nothing happened.

Based on the specs on paper for our video editing test unit, we weren't prepared to be amazed, we were more about seeing what the Z1 G2 could possibly do, rather than what it couldn't do. We were impressed.

However, when it came to benchmarking the components, rather than the full system, we saw some differences. On 3DMark’s Cloud Gate 1.1, the Z1 G2 had a physics score of 7,382 which was impressive. Unless the user needs a high-end gaming desktop (which would score closer to 15,000), the results for the Z1 G2 show that it is a top performer. In Call of Duty, frame rates of 60 fps were the most we were able to obtain at full resolution. As mentioned earlier, the combination of components gives the users what they need, a fast, efficient, stable system, which is strong for video rendering, editing, and post-production. However, if you are looking for a gaming machine, upgrading the video card would be the first upgrade to achieve maximum performance.

With two different versions of the Z1 G2, you get either a 10-finger multi-touch screen or a non-touch, non-glare screen.

Both have 27-inch diagonal IPS LED backlit LCD screens at 2560×1440, with a 2MP 1080p webcam. You can also install two optional Thunderbolt 2 ports which allow for the connection of fast external peripherals for transfer speeds up to 20Gb/s. For video rendering and post-production, these speeds will help in obtaining your desired goal quicker and with stability.

As a strong machine for multi-stream HD video production, rendering, and editing, the Z1 G2 is built for you. The time taken to render and export full HD videos is quite impressive and the screen options provided for the user make the Z1 G2 an obvious choice for professional development and the post-production market. Stability, efficiency, speed … HP did it right.