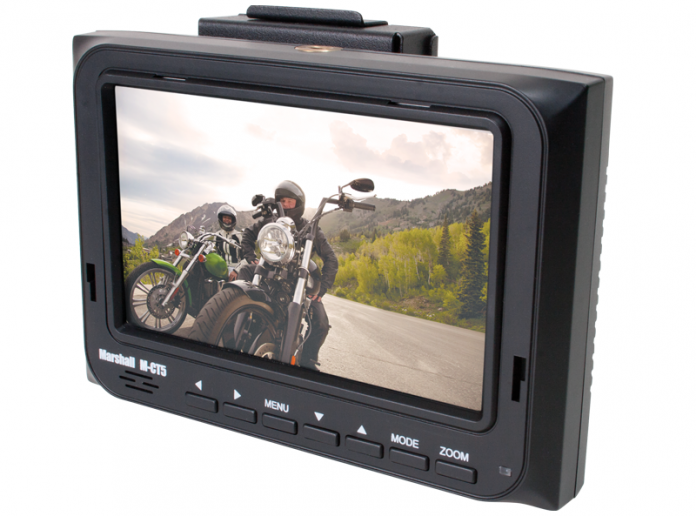 If you use a camcorder or DSLR, you know the feeling. Cupping your hand over the LCD screen, squinting at the tiny image and asking yourself, “Is the shot in focus or not?” Or the video that looked great through the viewfinder turns out to be too soft or dark when you watch it on your computer monitor at home.

Photographers and videographers know that it can be difficult to see an accurate representation of your shot on the camera’s small viewfinder or built in LCD screen. It’s even more difficult outside, in bright conditions or when the camera is in an extremely low or high position. To get correct focus and exposure levels, you’ll want an external field monitor. The M-CT5 may be the right monitor for you, especially if you’re on a tight budget.

The Marshall Electronics M-CT5 5-inch is a lightweight 5-inch 800×480 LCD monitor with HDMI input. It also has composite video and audio inputs on BNC connectors and includes a BNC-to-RCA adapter. An HDMI out can pass your signal to a larger monitor. The M-CT5 has many power options, depending on the model and accessories you purchase. Power can come from AA batteries, DSLR batteries or a plug-in AC adapter.

To get correct focus and exposure levels, youÃÂll want an external field monitor.

Higher end field monitors can have cool features like media recorders, color bars, video scopes and focus peaking, but they can also cost thousands of dollars. The M-CT5 is far less expensive and is intended for videographers who don’t need a display with a lot of bells and whistles.

We tested the M-CT5 with a Canon EOS Rebel T3i DSLR. The field monitor mounts to the camera’s hot shoe with an adapter that has a ball joint so you can swivel the monitor in any direction. It feels very sturdy despite the lightweight plastic construction. Our test model used the AA battery assembly for power. Six AA batteries powered the monitor for the entire test period of approximately five hours.

The M-CT5 is also very portable, fitting in most camera bags without adding a lot of weight. It’s less than a pound without batteries and not much more with batteries attached.

We first tested the M-CT5 inside a well-lit studio with the DSLR connected via an HDMI cable.

Another HDMI cable connected the M-CT5 to a 32-inch LCD television. The image looked crisp and clear on both, though it took some color tweaking in the menus to match the two displays. Here’s where color bars would have come in handy. After the adjustments, this two monitor setup proved to be an ideal monitoring solution for the indoor shooting location where the camera operator and the director’s video village were in different parts of the studio.

We then moved outside to test the monitor in bright sunlight. At first, the 5-inch screen didn’t seem like much of an improvement over the camera’s LCD because of its small size. But the 350 nit brightness, 500:1 contrast ratio and LED backlight of the M-CT5 made the image sharper and easier to see outside. A sun hood would have helped even more, but unfortunately, one doesn’t come standard with the M-CT5. Marshall Electronics offers the M-SUN5 sun hood as an optional accessory, or you can make your own removable sun hood out of cardboard, duct tape and a few pieces of Velcro tape.

The menu controls are intuitive and easy to use. Adjust the brightness, contrast, hue, saturation and color temperature of the video display with a few button taps. You can also zoom or flip the image. The automatic aspect ratio detection function allows you to switch between 16:9 and 4:3 modes, which is an especially useful feature for still photographers.

The M-CT5 supports both NTSC and PAL, and the menu offers many language options. The top resolution accepted by input is 1920×1440. Display resolution is scaled down to 800×480, which is more than adequate for the 5-inch screen.

Because what you hear is just as important as what you see when recording video, the M-CT5 also provides basic audio monitoring. Listen to camera audio through the monitor’s 2W speaker or plug your headphones into the 1/8-inch stereo jack. The built-in speaker doesn’t sound great, but it works well enough for reviewing video playback.

The M-CT5 shines as an on-camera display when mounted with the included hot shoe adapter. It’s also useful as a remote monitor when your camera is mounted to a jib or somewhere like the outside of a moving car. Optional mounting accessories are available from Marshall Electronics and other manufacturers.

Shooters on a budget may find the M-CT5 to be an ideal monitoring solution. What it lacks in high-end features, it makes up for with simplicity and a low price .