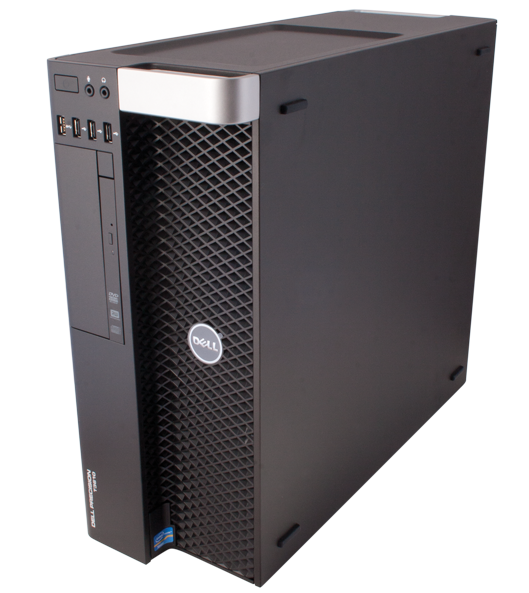 The Dell Precision T3610 is an all-out powerhouse workstation designed for graphic designers and number crunchers alike, though it could go head to head with a gaming desktop as well. Utilizing new developments such as the Intel Cache Acceleration Software and Reliable Memory Technology, a solid NVIDIA Quadro video card, strong processing from the Intel Xeon processor, as well as a highly developed chassis which provides the fastest component swap process we've seen, Dell has proven to lead the mid-range workstation market. After reviewing the Dell Precision T7600, we were excited to see what Dell has done to improve on one of the best products of 2012.

Though the Precision T3610 is built as a top performer as far as technology is concerned, the design and integration of components are areas which shine as well. For the IT segment, the chassis is built with high-flow front and rear panels to increase ventilation and optimize reliable air flow. The memory DIMMs are encased in a tunneled plastic enclosure which not only protects the DIMMs from dirt and dust, but also runs airflow through the enclosures to react efficiently with the memory cooling fins. Other features include front and rear aluminum handles to slide in and out of tight spaces, while the inside is equipped with various one touch levers, which immediately dismount attached hardware for easy replacement.

With design such as this, gone are the days of 10-minute power supply swaps or hard drive installations. With the flip of a level, the entire power supply is removed for cleaning or upgrade. There is also ample room to switch out a video card without having to twist and wedge the card in order to remove it from the chassis. As easy as it is to remove, it is as easy (or easier) to install. The amount of USB 2.0 and USB 3.0 ports is also a great design addition. An A+ to Dell for a true labor of love devoted to the IT community.

The rest of the chassis is very impressive as well. It has extra space for 8 total memory DIMMs (up to eight at 64GB), a PCI card with five additional PCIe cards all full length, to accept an additional video card for using it as a gaming desktop or higher end video rendering machine. It sports up to four 3.5-inch or eight 2.5-inch internal SATA (six SATA ports: four 6Gb/s and two 3Gb/s), SAS or SSD hard drives, a sound card and a 1300W power supply to top things off. Most of the drive and hardware bays are pre-wired so dropping in a new drive is clean and easy. The I/O ports include three USB 3.0 ports (though they are colored black, rather than the blue standard for USB 3.0, so you will have to actually look for the “SS” super speed designation mark under the port, three USB 2.0 ports, DVI and two Display Ports, Ethernet, PS/2 mouse and keyboard, serial, and audio ports as well. On the front of the chassis, the user has access to three USB 2.0 ports and a USB 3.0 port (also colored black) as well as headphone and microphone connections. There are also another two USB 2.0 ports found on the motherboard. Therefore, a total of eight USB 2.0 and four USB 3.0 ports provide ample amounts of connectivity to accessories.

This is really where the Dell Precision T3610 shows what it is made of. Starting with an Intel Xeon E5-1620 v2 quad core processor with a clock of 3.7GHz and 8 threads it has shown to be a strong processor even among newer processors such as the Intel Core i7-4770 or the AMD Opteron 4386.

In our test unit, the 3GB NVIDIA Quadro K4000 video card, which is a great performing GPU for mid-to-high level graphics and rendering. Our unit supplied excellent results compared to other similar builds, and though it’s not a gaming desktop, video’s intense need for graphics means a good judgement can use the same benchmarks. On 3DMark Cloudgate 1.1, the T3610 had a physics score of 7,061 which was impressive. Unless you need a high-end gaming desktop (which score closer to 15,000), the results for the T3610 show that it is a great performer.

Though performance is important for highly complex calculations and video rendering, workstations are built for stability and security, unlike a gaming desktop which is a performance driven build with less care for stability and security. With Dell’s Reliable Memory Technology RMT and Intel’s CAS-W, the Precision T3610 is a stable build which will help keep your business up and running. The RMT is similar to hard drive error mapping technologies, and will detect errors on a DIMM and report these errors to the BIOS as “unusable” and will then erase those bad cells from future memory usage. After this takes place, the portion of that memory which has been identified as “bad,” will not be utilized in any further computations or system usage. This keeps video rendering and mission critical applications from crashing and having to replace costly components or producing any end user downtime.

Gone are the days of 10-minute power supply swaps or hard drive installations.

Additionally, CAS-W produces better application performance by utilizing software that installs on the workstation and fast SSD/Flash media to cache “hot” data, eliminating I/O latency and improving targeted application performance. The less active or “cold” data can then be stored on a regular spinning disk drive and be integrated with the hot data as needed. It provides better performance at a fraction of the price, rather than having to purchase additional SSDs. In fact, when first viewing the Dell Precision T3610, we noticed the 1TB SATA drive (7200 rpm) and were let down. A system this powerful with so much potential and it consisted of a 7200 rpm SATA? Throw in a 15,000 rpm SAS or SSD and it would fly! However, with the CAS-W technology and the matching of processor, memory, and motherboard, the Precision T3610 is solid, fast, and efficient.

Powerhouse for the Masses

Though the Precision T3610 is able to be configured to upwards of $9,000 fully loaded on the Dell website, the nine different preconfigured versions will hold the right machine for most people searching for their specific need. From a base price of $1,465 up through an engineering and design based prebuild at $3,160, Dell has a T3610 for almost anything. Our test unit included the Intel Xeon E5-1620 v2 3.7 GHz quad processor, 16GB DDR SDRAM at 1866MHz, 1TB 3.5-inch Serial ATA (7200rpm) HD, a 3GB NVIDIA Quadro K4000 GPU video card and an 8x Slimline DVD+/-RW Drive. With this build we were able to run through various daily tasks, effort free, manipulate large amounts of data, render video, use it as a gaming desktop, and still have music streaming from the internet; all at the same time. For beginner to intermediate videophiles and videographers, the T3610 with the Intel Xeon processor packs a punch and is easily a leader in mid-to-high range video rendering. We highly enjoyed working with the T3610 and look forward to seeing similar products from Dell in the future.

Brian Teal is a long-time computer builder/tester who enjoys the newest technology. He enjoys integrating technologies to meet real-world situations and has instructed various computer classes for Fortune 500 companies and their employees.