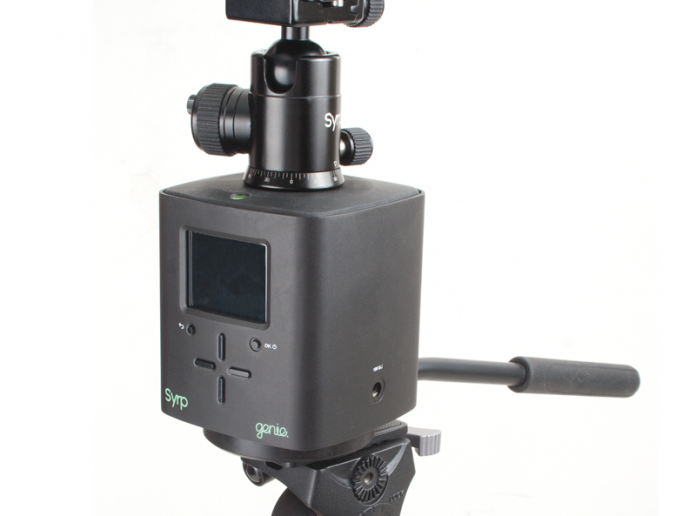 At first glance, the Genie looks quite unassuming. At just over 3lb. and about 4-inches in height, width, and depth, the Genie seems more like the world’s bulkiest phone rather than a motion control device, but you can’t judge a book by its cover. What Syrp was able to pack into the 3-pound wonder is nothing short of astounding. The Genie can perform a shoot-move-shoot dolly function for time-lapse photography, but it can do pans and tilts as well, however, Syrp didn’t stop there. The Genie is designed for silky smooth pans, tilts and dollies, all while shooting video, making this device incredibly useful to both photographers and videographers alike.

One glance at the design of the Genie is all it takes to know that it’s a product that is built to last. The lightweight composite material in the Genie’s makeup feels strong and rigid, a good feature for a device that will likely be required to take a lot of abuse on the road.

The front of the tank-like device sports a bright and easy-to-read color LCD screen, which displays information about the motion to be performed, while the side has a USB input for firmware updates, a 15-volt DC port, a sensor port for hooking up sound, light, or motion sensors that can auto-start the unit, and a remote trigger that can control your DSLR’s shutter.

Turning the Genie around, there’s a quick release which allows time-lapse photographers to easily change from the included pan and tilt base to a linear motion base. Each base comes with a 3/8-inch-16 thread which allows you to mount the Genie to nearly any tripod system available on the market today. In addition, the linear base has a 5/16-inch mount which works well for typical sled and rail mounts. Of course you’ll still need a way to attach either a ball head or fluid head to the Genie which is why Syrp included a 3/8-inch-16 male thread at the top of the unit.

Time for Some Time-Lapses

Though the specifications and features of the Genie might be good enough to get time-lapse photography professionals excited about the motion control device, performance is the only attribute that will actually tempt them to open their wallets. That’s why we decided to put Syrp’s new device to the test by taking it out to some unforgiving locations in California.

We started by testing out the Genie’s time-lapse panning feature. To do this, we set up the unit on the top of a high overlook, north of Owens Lake in order to record a time-lapse of clouds forming over the majestic Sierra Nevada mountain range. We were using both the Genie and the Syrp Ball Head to support a Canon EOS 5D Mark III, which at 3lb. is much lighter than the unusually high 44lb. weight limit that the Genie can handle. After a quick consultation with the manual, and having already viewed Syrp’s easy-to-understand video tutorial, we were easily able to set up the motion control device to do a 120-degree pan across the dry lake.

A helpful feature allows the ability to ease in and out of a pan by selecting the ease in/out time in the “Advanced” portion of the menu.

If you’re one of millions of people who dread any task that includes crunching numbers, the Genie’s got your back. You can simply set how many seconds you want your finished video to be and Syrp’s device does the rest. It’s a feature which almost justifies the price all on its own.

Another feature we found helpful was the ability to ease in and out of a pan move simply by selecting the ease in/out time in the “Advanced” portion of the menu. This allowed us to start and end our time-lapse videos as fixed shots, though this was a cool feature, we would have liked it if the Genie could have taken a set amount of photos before the move started, and after it ended, so that we could have a longer fixed time-lapse in our finished video. That feature request aside, we also quickly fell in love with the Genie’s time-lapse preview feature. Without this feature, it would have been very difficult to predict where the shot would start and end with any degree of accuracy. We also found Syrp’s included presets for common time-lapse scenarios like clouds, people, and stars to be excellent guides, though we often preferred the freedom of making and saving our own presets.

Overall, we were very impressed with how smooth a motion the Genie was able to produce for our time-lapse. We did notice a few bumps, but we attributed them to some high winds coming across the lake. in addition, we also performed a tilt time-lapse out in the desert next to the famous Joshua trees of Death Valley by using a ballhead mount at a 90-degree angle and were astonished by the beautiful results.

We decided to use both the 2.2.2 HDR firmware upgrade for the Genie and its linear sliding base.

For this test, we went to nearby foothills to capture a sunrise and sunset. Since the Genie doesn’t come with a slider track, we used our own dolly track and sled system in order to get a smooth linear motion. We also replaced the panning with the linear motion base, which was as easy as sliding the release lock on the back of the device and snapping the linear base into place.

One of the cool things about the Genie is it uses a unique rope and coil system for its dolly movements. The advantage here is that you can use this device on almost anything with wheels. Syrp’s Vimeo page has several examples of customers who have used homemade cable cams and skateboards to perform incredibly long dolly moves over streams and mountain passes. This versatility highlights another reason why the Genie is well worth its price.

Besides setting up the move in the menu, we had to attach both ends of the included 7-foot Kevlar rope to our dolly track. To do this, we used hook-and-loop fabric to attach the straps of the included slider mounts to each end of our dolly track. One thing we did happen to notice was that if the Kevlar rope wasn’t absolutely guitar-string-tight on both ends of the unit, the coil system would sometimes slip, especially when the dolly track was at an uphill angle. Thankfully, the Kevlar rope can take quite a bit of tension, so we were able to get this right.

In the end, we were very pleased with the time-lapse photography and videography that the Genie produced with both panning and linear base. When we played the time-lapses back, each one was very smooth and incredibly accurate. The video moves on the Genie also impressed us with its speed and accuracy. The motion control device can pan 360 degrees in just five seconds and can move three feet in just 45 seconds, making it incredibly useful for getting unnaturally smooth pan and dolly movements. Though the $890 price may initially seem high for a motion control device, the Genie’s compact size, light weight, easy-to-use interface, and versatility make it a worthy tool for every professional’s time-lapse kit.