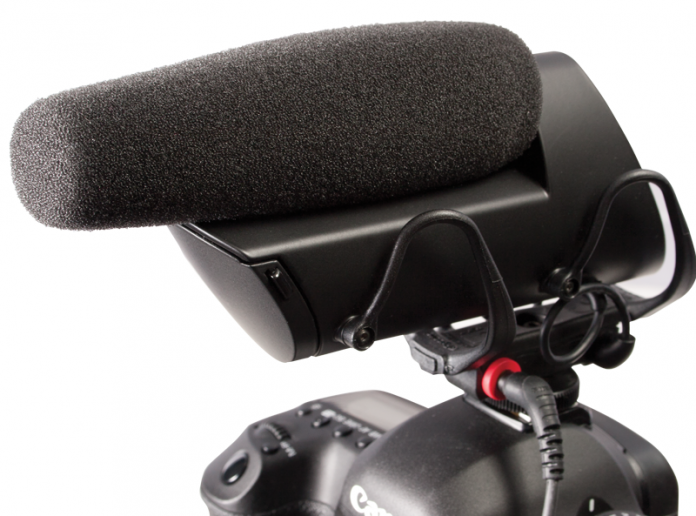 Run and gun shooting is the norm for many video producers, especially in wedding videography. Shooting live events tend to put the shooter in awkward situations, with less than ideal places to record natural sounds. There are many options when addressing the need for additional tracking of live situations, from stand alone multi-track devices like the Zoom H6 to shotgun mics like the Shure Lens Hopper. Choosing what’s best for you depends mainly on your desired outcome, however if ease of use is your goal, the Lens Hopper series from Shure will quench your thirst.

THE VP83F GIVES YOU A MONITORING OPTION, SO NO NEED TO GO BY METERS.

The Shure Lens Hopper VP83F mounts to your camera’s hot shoe. It has two options for use; either record to the microSDHC flash media card alongside your camera, or use it as an external mic to bypass the camera’s built-in mic altogether.

If you’ve been in the situation where the hubbub of the surroundings overpowers what you’re shooting, you have felt the need for a shotgun mic. With its supercardioid mic pattern, a shotgun focuses in the direction you point it. When shooting a wedding and the best man starts giving his speech and you’re across the room, with a shotgun, you might just have a chance of getting good audio to use.

The VP83F takes add-on DSLR shotgun mics to the next level. With its isolating shock mount system, to its output for use instead of a built in mic and even to the ability to record parallel to your camera with the flash media card option, Shure changed the game, making a really helpful tool.

With its 24-bit recording at 48khz, quality isn't an issue. It also has a low pass filter and up to +60db gain selection. The mic pre’s are more discrete than most built in to DSLR’s, and offers radio frequency immunity, to help fend off cell phone and other unwanted RF noise.

The VP83F weighs 7.6oz and has a built in windscreen. However in some situations, the optional fur windjammer would be a nice addition to block out even more unwanted outdoor noise. It comes with a gold plated detachable cable to connect the mic via a 1/8-inch mini jack, with one for headphone monitoring.

This is very helpful as many DSLRs like the one used for this review, the Canon EOS 7D, do not have a headphone output, making monitoring audio that much more difficult. The VP83F gives you a monitoring option, so no need to just go by the meters anymore.

The build quality is what you’d expect from the builders of the SM58. It’s rugged and feels like it will last for years to come. It mounts to the hotshoe of your camera, so it’s a simple attachment to run and gun your next production opportunity.

Sitting Shotgun With The Lens Hopper In Hand

So how does it stand up? It’s built with abuse in mind. Shure is known for its road ready mics and seems to always be setting its goal on being the standard to which others are judged. For testing the Shure Lens Hopper VP83F the goal was to see how far It could perform. Mounted on a Canon EOS 7D, first recording to the flash media card and then as an external mic, it was taken into the field.

So what should you expect? The first test was to take it to a crowded place and try to record speech, in this case, it was a testimonial for a local commercial. When 30 feet away, it did great, focusing on the speaker without picking up noise on either side, but also picking up what was going on behind the speaker. This is what you’d expect from any shotgun mic. Then as the camera got closer, 15 and 7 feet away, speech became more audible with less and less background. There was no hiss on the flash media card tracks, and just a bit with the bypass. The quality of the mic pre’s would explain the difference between the two.

The headphone monitoring was great! Very simple and made a world of difference over tracking by meters and playing back to verify good quality sound.

So where does it fail? There is nothing about the quality of the sound that would make one hesitate to buy it. It’s a great improvement over the 7D’s built-in mic, and the directionality of the supercardioid mic makes many difficult situations, simply put, not as difficult. However, using the flash media creates the need to re-sync the audio to the video, and on top of that, Shure missed one key feature that is a huge mistake … No USB connector to get the audio off the flash media card. Yes it’s simple to just pull the card and put it into a card reader, but it would be a home-run if it included a USB out.

Would You, Could You, Buy This Rig?

Yes, the VP83F is a great product. If one needed a simple run and gun shotgun mic, look no further. It’s not the cheapest of tools, but it’s a valuable one nonetheless. It does everything it sets out to do, and does it with intuitive design and quality construction. Shure has made its name making rugged, quality products and the VP83F is right on the money!

Chris Monlux is the Creative Services Manager at a local NBC and CBS affiliate.