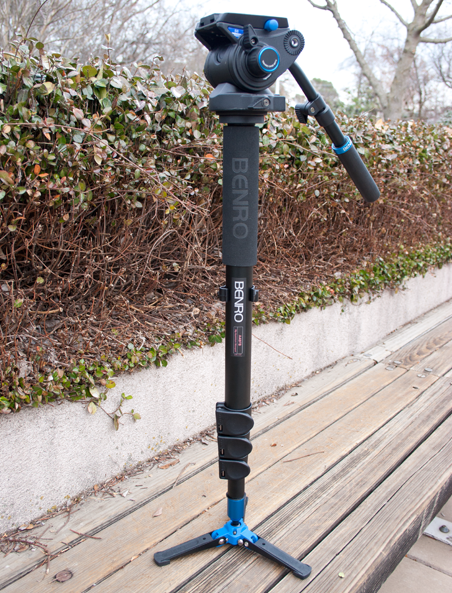 For those times when the tripod is too heavy, too space hoggy or just too much bother, and that handheld image quality isn’t going to cut it either, consider using a monopod. A monopod is a great in-between solution that won’t be as stable as a tripod, but will be a lot more so than a purely handheld shot. While there are a number of choices available, we found the A48FBS6 video monopod kit from Benro to be a good one with some nice options.

Everything but the Packaging

The monopod (A48FB)/video head (S6) combination comes ready to rumble in a travel case with double carrying handles, shoulder strap, interior zippered pouch, tool kit (for tension adjustments) and quick release plate. There’s also a twist lock version with large bands for twisting, but we stuck to the flip lock for this review.

The prefix, “mono” refers to one of something, so where a tripod is a stabilizing device with three legs, a monopod has only one. Consequently it is much lighter, takes up less space and is likely to fall over if you don’t keep hold of it. Now, that falling over thing may seem somewhat of a disadvantage, but the benefits of using a monopod are plenty. A monopod can take your camera where a big, heavy tripod dare not go, as well as provide stable image quality and much needed relief during lengthy, otherwise, handheld shots.

For example, we recently attended an elementary school’s musical program. Knowing that space would be in short supply, we thought this would be a perfect opportunity to try out the monopod. Sure enough, there was standing room only and spreading out a bulky tripod would have gained us some angry stares and verbal abuse at the very least.

The leg sections fold down to about 30-inches tall, perfect for shooting from a seated position.

Going camera-only is certainly an option when space is sparse, but that’s a lot of hand holding, which leads to a great deal of fatigue and much shakier image quality. The monopod is an excellent solution, allowing greater stability and fatigue relief. The light weight (less than five pounds) and small size of the monopod adds up to greater mobility too. When someone steps in front of you, or you want a different angle, simply pick it up and move to a better position.

The leg sections fold down to about 30-inches tall, perfect for shooting from a seated position.

When standing, simply flip one or more of the three locking levers and an additional section of the ‘pod slides down, extending its length to more than 70-inches. The monopod rests on a thick rubber pad with the option of engaging one or more of three individual feet to provide greater stability. The head has a fluid filled pan cartridge for very smooth pans by simply rotating the thickly cushioned grip or using the adjustable length pan bar handle. For super smooth tilts use the handle to tilt the video head as you would any tripod or simply lean the monopod forward or backward. The leg is attached to a ball joint that allows for such movement, including laterally, in case you want to throw in a dutch angle or two. In most cases, since you will likely want your shots as level as possible, the monopod includes a built-in bubble level. If you’re in the dark, as in the case of our school program, simply push the flat blue button and the level lights up.

If you’re shooting an event and find tall people or other obstacles blocking your view, you can hoist the ‘pod above the crowd. Take a solid, stable stance, knees slightly bent to act as shock absorbers and pull the base firmly into your hip or waist. It won’t be quite as stable as on the ground and you’ll need an articulating screen on your camera, or a remote monitor, to properly frame your shots, but it’s better than missing the shot altogether and you can still get some nice pans and tilts where needed.

We shot our school program with a very basic point and shoot camera with great results. However, we wanted to see how it handled something a bit meatier, so away from the crowd, we mounted up a nearly eight pound front-end heavy Canon XL2 with a large 20x lens. While most users are unlikely to handle this much weight, the monopod is rated for more than 13lb.

A very nice option included on the S6 video head is a 3-step counterbalance. These adjustments counter the weight of the camera to keep it from pitching forward, as our camera is prone to do. Set to zero resistance, the camera will flop forward with a clunk, not a good thing, to say the least. Set to three, the camera slowly descends forward and comes to a very soft stop without any jarring shudders at all, a great safety feature. The head also includes a tilt drag control knob with ratcheting tilt and pan locking levers.

We really like using a monopod as an alternative to bulkier tripods for run-n-gun or close quarters shooting. The Benro A48FBS6 video monopod kit is a great choice, with a solid build and excellent options.

See the Benro in action