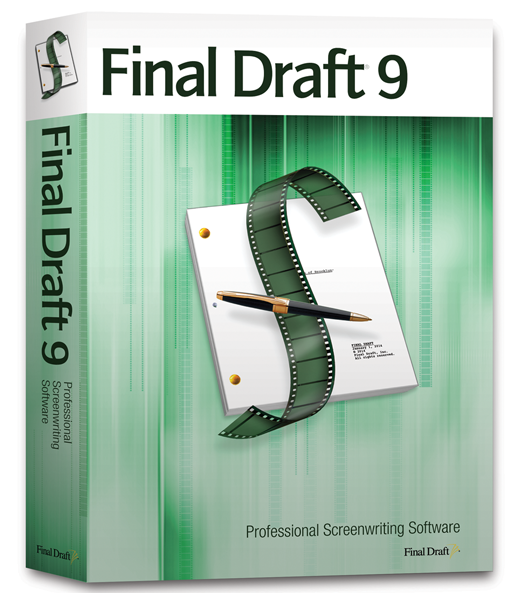 Screenplays and other scripts have strict formatting rules, and writers must stick to the industry standards if they don’t want their masterpiece to end up in the trash. Screenwriting programs make it easier for writers to put their ideas on the page in the standard formats.

Final Draft isn’t the only screenwriting program out there, but it’s the oldest and remains the industry standard. This newest update offers several new features and enhancements of other tools. It’s now compatible with Retina display Macs and supports both OSX Dictation and full-screen mode. Final Draft 9 is available for Windows PCs as well. Buy it as a boxed disc, or download it from the Final Draft website or Mac App Store.

We downloaded Final Draft 9 and tested it on a MacBook Pro running OS X 10.9 (Maverick). It ran smoothly with no crashes or other errors. Final Draft 9 files are saved with the FDX extension, but it opens older FDR files with ease. When importing files from other programs you may have to correct some of the formatting.

Fortunately, formatting is a breeze in Final Draft 9. Returns and tabs move you easily between the script elements: scene heading, action, character, etc. The shortcuts are easy to learn and customize. A status bar at the bottom of the window tells you exactly which element the next tab or return will go to. The SmartType tool remembers and automatically completes character names and other common elements while you are typing. Once you get a hang of the shortcuts and SmartType, you can write faster and pay more attention to the story than the formatting.

Many of Final Draft 9’s features are designed to help writers stay organized while writing their script. The Panels system splits your screen into separate panels so you can view pages of your script in one panel while viewing another part of the script, your Index Cards or Scene View in the other panel.

Scene View provides a wider overview of your script with a title and summary for each scene. Use it to color code and add basic information to each scene. Change the order of scenes by dragging them, or navigate to that scene in the script with a double-click. Index cards are another way to display scene summaries. The summary view allows you to add more information onto the index card: blocking, plot points, locations and other notes. Print your index cards directly on 3×5 or 4×6 cards if you like to work the old fashioned way with cards pinned to a bulletin board or scattered across the dining room table.

Another useful tool is a customizable floating palette called the Navigator. Keep track of story details with three tabs: Scene, ScriptNotes and Characters. The Scene tab lets you add a title, summary and color to each scene. ScriptNotes add comments and other information for the writer and collaborators. The Characters tab is a new addition to the Navigator that helps track a character’s scenes and story arc. It auto-detects the characters in each scene based on dialogue, and you can add characters with no dialogue. Need help naming a character? The Names Database has over 90,000 names to choose from.

Final Draft provides templates for industry standard scripts as well as stage plays, comic books, novels and more. The Final Draft Template Library has examples from more than 100 classic and current television shows. Most screenwriters need only a basic screenplay template to start, but it’s fun to see the different writing styles of your favorite shows.

Many of Final Draft 9’s features are designed to help writers stay organized.

Another feature that’s more cool than practical is hearing your dialogue read aloud. With the Text to Speech feature, Final Draft reads your script back to you in different voices for your characters. Unfortunately, all the voices sound very artificial and almost identical. The computer’s reading can be amusing, but not as useful as having your script read aloud by live actors.

A more practical feature is the ability to watermark scripts. Every script you print or share as a PDF can include a unique watermark identifying the person to whom the script is being given. Another way to protect your intellectual property is to register it with one of the several Writers Guilds, and the U.S. Copyright Office should recognize Final Draft 9 scripts. Selecting “Register Script” from the Final Draft file menu opens a webpage where you can start the registration process.

From Page to Screen

Most screenplays aren’t written to be read by the general public. They are blueprints for entire productions, utilized by everyone from producers to prop designers as part of the team that translates a story from page to screen. Final Draft 9 has several production features, but there’s definitely room for more.

Because a script usually changes many times during production, revised pages are color coded. The Revision Mode tracks every change in the script. Revision colors are shown on the borders of the script while writing and as solid page colors when exported to PDF. Print Character Sides, which only includes pages with speaking parts for a given character in your script, is a useful feature for casting.

Final Draft 9 can create reports on characters, locations, and script details that can be useful for the writer and production team. However, it lacks important production features like call sheets, shooting schedules and calendars. It also lacks the online features of competitors, with no cloud storage or collaboration, and no syncing with mobile devices. The iPad is compatible with the Final Draft Writer app at the cost of $50 to create and edit script FDX files, but everyone else is stuck with viewing PDFs.

Independent filmmakers and writers on a budget should look at less expensive software, with options in the $50 or free range. Despite its greater price and limited production features, Final Draft 9 remains the industry standard and king of screenwriting software. Its formatting and organizational tools take the headaches out of writing and help you do the job very well. Just don’t expect anything innovative.