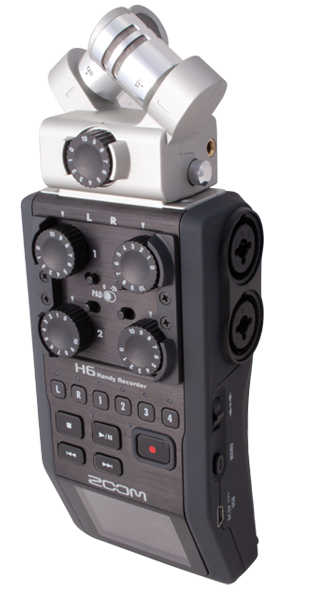 Zoom one-ups its own game with the H6. With the same intuitive design as Zoom’s H4n, the H6 now comes with more, really fun options. Digital recording won’t be the same. With four mic/line (XLR/TRS) inputs and the option to expand them to six, the H6 is flexible and suits just about every need. No matter what your use, from video production to music production, the H6 will satisfy. Unlike the H4n, and every other portable recorder, the H6 has changeable mic capsules. It can be your shotgun mic, Mid-Side pair mic or  X-Y stereo mic. On top of that, you can nix the mics all together and expand it to having six separate XLR/TRS inputs.

With the popularity of DSLR rigs, some peripherals are a must have, and portable recording devices like the H6 have become the norm in the field. The need to have multiple channels of digital recording, which many DSLRs don’t have, means the capability is almost a requirement.  Like the H4n before it, the H6 records to an SD card. But with the H6, you now have the option of using SD, SDHC and SDXC cards so you can use up to a 128GB card, this along with the long battery life (at least 20 hours), makes it almost impossible to need anything more.

What’s in the box … and what does it do?

The Zoom H6 comes in a hard plastic case, with the space to hold the X-Y mic, Mid-Side mic, a USB cable and a windscreen. Changing the mic capsule is easy, with a pinch of your fingers, simply pressing the two buttons on the side, the capsule pulls off, and as simple as it came off, another replaces it. The mic/line inputs are on the side of the H6, and have individual manual gain control knobs and 20dB pad. This is an upgrade from the H4n, many audio engineers prefer knobs over buttons. All of the channels (L, R, 1, 2, 3, 4) have an arming button and easy to see meters. Although it takes a moment to power up, once on, it has no issues operating as fast as you can instruct it. There is a menu, but it’s simple, and allows you to add compression, limiting and effects to any channel. You can also change the recording quality from 24- to 16-bit as well as changing the sample rate (44.1/48/96kHz).
Advertisement

Have you ever been in a situation that you were caught off guard, and what you are recording, starts before you’re ready? The H6 has a solution, it’s always recording. The Pre-Record mode allows the recorder to pick up two seconds before you begin. There is also the same option on the backside, when you stop, it continues for two more seconds. Another safety feature is Backup-Record mode. This is for when you set your input gain too hot, and you get distortion. The Backup-Record feature is always recording a tandem track of every input at 12dB less than your set gain.

Changing the mic capsule is easy, with a pinch of your fingers, simply pressing the two buttons on the side, the capsule pulls off, and as simple as it came off, another replaces it.

There are a few optional accessories for the H6 that take the whole device to the next level. First is the camera shoe. It screws into the bottom of the device to add a shoe mount. The others include two optional capsules. The shotgun capsule goes well with the camera shoe and makes one-person shooting a lot easier, and the Dual XLR/TRS Combo capsule gives you two more XLR/TRS channels.

After putting line level inputs into the device, and hooking up a Shure SM57, Shure SM58 and Sennheiser MD421-II, the preamps of the H6 impressed with no noise and sounded nicely transparent. The quality of the XY capsule is great, offering both 90- and 120-degree stereo spread, the stereo image is very true, and offers a lot of flexibility for the user. The Mid-Side pair capsule allows a flexible stereo image, and would be a lot of fun to use for captivating soundscapes for both music and production: think of your head inside a beehive; the Mid-Side capsule would be menacing in its ability to engulf you with stereo sound.

It doesn't get much better than this, folks! You’d be hard-pressed to think of any features you’d need, other than what the H6 is equipped with. Its overall build quality along with its interchangeable capsules and intuitive operation make the Zoom H6 top in its class.

Chris Monlux is the Creative Services Director at a local CBS and NBC Affiliate.