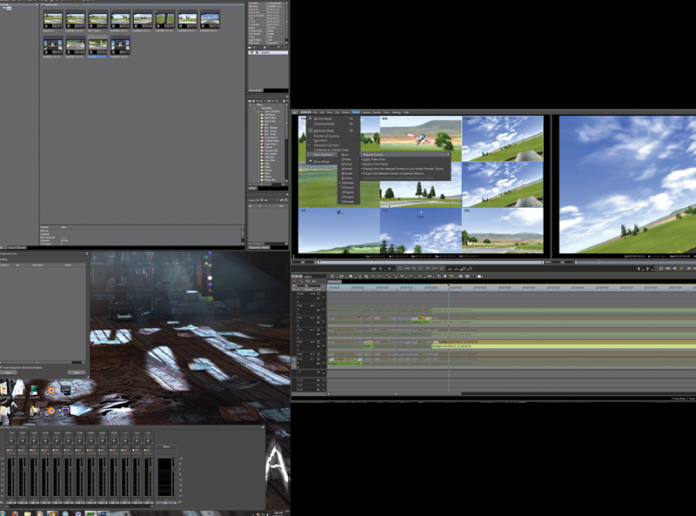 EDIUS was developed by Canopus and was one of the first editing systems to utilize the capabilities of video cards to process layered video. Now owned by Grass Valley, EDIUS has grown into a full-bodied professional editing program. Grass Valley is hailed throughout the visual media industry as the finest in live switching. For production, they've led the market in the last century, winning 18 Emmy awards for technical innovation, as well as having been in the industry at the highest levels for over 50 years. Can their Editing system hold up against the competition and deliver outstanding results worthy of the Grass Valley name?

There are a plethora of new features in Grass Valley EDIUS Pro 7, including an improved 4k workflow with support for Blackmagic Design’s DeckLink 4K Extreme, and up to 40 percent faster handling of AVCHD media. Also, EDIUS Pro 7 boasts better handling of virtually any format of digital video and supports third-party hardware and software including an EDL exchange with DaVinci Resolve.

The Good About EDIUS Pro 7

We spent about 20 minutes looking for a 3D picture in picture plug-in to scale video in our test project (the old way of doing it). Then, we finally noticed that you no longer have to use a separate plug-in for digital video effects such as scale, rotate, and crop. When each clip is placed in the timeline EDIUS Pro 7 automatically registers the plug-in Layouter. You can scale, rotate, add drop shadows, and feather your crops, all in real-time. For more advanced compositing, EDIUS Pro 7 has a spline mask tool, so you don't have to use After Effects to get a really good mask.

This has to be the easiest software we've ever gotten running. On a system using an Intel Core i7 Processor, NVIDIA GTX 560 graphics, 12GB RAM and a 10TB RAID 5 eSATA, with an Intensity Pro I/O box, EDIUS Pro 7 was up and running instantly. There was no troubleshooting, no hardware, nor software workarounds necessary. So far, the slogan "Edit Anything, Anywhere" holds true for EDIUS Pro 7.

EDIUS Pro 7 has superior 4k workflow to say the least. We tried it out by importing RED footage (R3D, not the QuickTime proxies). EDIUS Pro 7 not only accepts the raw RED footage, but automatically created proxies, and copies of the files within our project folders.

EDIUS Pro 7 has an extremely easy interface. The operations and interface, when compared to other editing packages, are extremely intuitive and easy to navigate. Multicam sequences are far easier to assemble when compared to the competition. Simply drop all your clips in the timeline in separate layers, select them, and tell it to go into multicam mode. Anyone with any nonlinear editing experience can be up and running with fairly complex projects in relatively little time.

As their slogan says, "Edit Anything." We threw all kinds of strange formats at EDIUS Pro 7. As previously mentioned, RED R3D files, AVCHD, P2, and strange resolutions such as 2560×1440 screen captures, and even SD MPEG-4 AVI files. The big editing software programs all had issues with these AVI files. Admittedly, we said "yeah right" when seeing "Edit Anything" on the splash screen for EDIUS Pro 7. When it loaded these AVI files, we were very surprised. We even tried to break it with F4V files, and EDIUS Pro 7 laughed in our faces. Every format we threw at this editor, was eaten up.

EDIUS Pro 7 was up and running instantly. There was no troubleshooting, no hardware, nor software workarounds necessary.

EDIUS Pro 7 is not only easy to learn, and easy to use, but all the buttons are precisely where you would guess they should be. The interface is designed to compliment the versatile functionality very well.

The Cons of EDIUS Pro 7

Since Grass Valley is known for its live switching solutions, we had to test multicam editing. Although multicam is easy to setup and use, it needs better streamlining. Most editing programs appear to give priority to the program monitor, and to real-time playback. (You may end up with some stutter in the preview of all your angles, but your program output is clear and in real-time.) EDIUS Pro 7 seems to give priority to all displays for both program and clips equally.

We tested EDIUS Pro 7 with eight camera angles of screen capture at 2560×1440 in proxy mode with a 1080i project. Instead of the software automatically adjusting and skipping frames in the preview monitor(s), all clips and the program slowed down to three frames per second, playing every frame (the result was about 30 seconds to make it through five seconds of our sequence). We had to manually tell the software to skip every 10 frames. These settings also affected the program monitor. This made editing a multicam sequence extremely difficult and slow.

Real-time 4k? Almost. After bringing in a RED R3D file, you must wait for the proxy to be built, and moved. For a 30-second R3D clip it took nearly five minutes in EDIUS Pro 7. The only way to verify that it was truly done importing was opening the Background Job window in EDIUS Pro 7. Attempting to playback the footage before the proxies were completed resulted in half a frame per second playback at best, and several crashes at worst. Save often, and check that background job window.

EDIUS Pro 7 is easy to use and set up. With a middle-of-the-road cost at$700, EDIUS Pro 7 will be good for any short-format editor who doesn't want to futz around getting their system off the ground.

Strange playback issues in multicam, no automatic optimization in multicam, some proxy creation issues with R3D

Besides being a video producer and technology consultant, author Ty Adronis is an R/C (radio control) enthusiast. This link, takes you to the video he produced for his test of the Grass Valley EDIUS Pro 7.