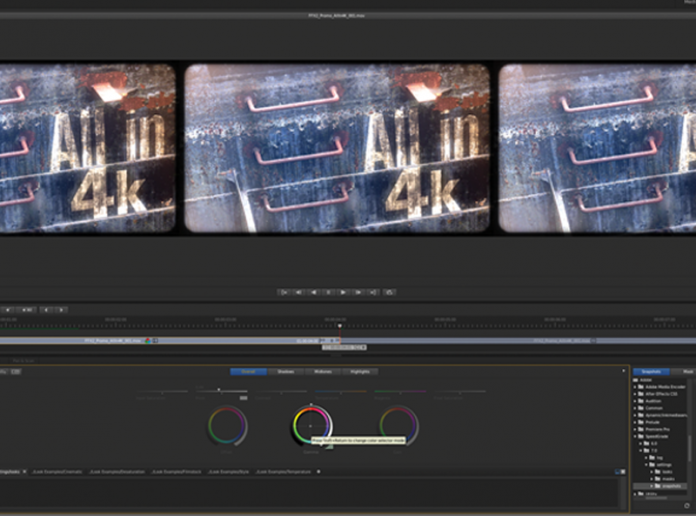 On June 17, Adobe released the latest update to its creative software platform, Adobe Creative Cloud. The new name is a direct reference to the services and the form of delivery for Creative Cloud. Adobe did away with the traditional perpetual license of the software and is only available through subscription. For information on how this new software model works check out the article "Adobe Creative Cloud Takes Flight" in this issue.

Adobe's video editing application, Premiere Pro, received several updates. The focus on these upgrades appears to be user speed and ease of use. On its most basic level, any video editing app is about sequencing different clips in a timeline. Adobe Premiere Pro CC delivers simplified track targeting, allowing the editor to work more efficiently. Track targeting allows the editor to place source sequences into other sequences. In the past this was done by nesting, placing the source sequence as a single clip into the new sequence. In Premiere Pro CC, a source sequence can be placed into another sequence with or without nesting. Through track targeting, specific tracks can be placed exactly where the editor wants them.

On large projects, with multiple clips, it's easy for linked media files to go offline as projects and source media are moved around and directory structures change from computer to computer. Locating and reconnecting media files inside of a project is time consuming. Premiere Pro CC boasts a new Link & Locate feature. The dialog box is similar to the Media Browser and allows the user to preview files to ensure the correct clip is reconnected. When one clip is found and relinked, Premiere Pro CC will intuitively relink all unlinked media that resides in the same folder as the found clip.

After Effects CC expands on its capabilities for visual effects and increases its efficiency in performing common tasks. The relationship between After Effects CC and Maxon's CINEMA 4D (C4D) goes back for several generations of software releases, most notably for being able to share 3D camera information. This helped C4D become the 3D software suite of choice for many After Effects users. However, this partnership was limited, the workflow still required separate work to be done in each individual program with rendered footage from C4D being the only option for viewing a composite. The Adobe Creative Cloud update to After Effects CC brings with it a live 3D pipeline between Cinema 4D and After Effects CC. After Effects CC ships with a version of C4D, Cinema 4D Lite, that allows users to create and animate 3D elements for use in After Effects CC. After Effects users have long sought true integration with a 3D animation application and this is it. The user is able to export After Effects CC camera information to C4D, animate 3D objects in C4D, and then bring it right into their After Effects CC composition without having to render first. It should be noted that Cinema 4D Lite does not include the tools needed for advanced polygon modeling but it is able to import and use models that are created elsewhere. Users aren’t restricted to Cinema 4D Lite because of the CINEWARE plug-in. This allows the pipeline between After Effects CC and C4D, and works with any current version of C4D. This means 3D artists with upgraded and full versions of C4D are able to take advantage of the After Effects CC and C4D integration. This drastically increases efficiency while adding serious native 3D capabilities to the Creative Cloud workflow.

The Creative Cloud user is able to sync their application settings with their account, allowing them to use the settings on different machines without having to physically transfer these files or reset them in a new environment.

After Effects CC boasts a diverse set of tools and one tool it’s most noted for is its ability to mask an object, whether accomplished through keying or rotoscoping. After Effects CS5 saw the introduction of the Roto Brush, a tool that allows the user to select an object or region of their video and the tool intuitively creates a mask isolating that selection, tracking it through the clip. Roto Brush results are often mixed, it takes the user a fair amount of finessing to get an accurate mask. Often times that’s contingent on well shot, sharp footage. Regardless of the tools used, mattes are tricky to generate for objects that have chaotic edges, such as leaves on a tree or a person’s hair. New to After Effects CC is the Refine Edge tool. The Refine Edge tool works in conjunction with the Roto Brush. After the editor makes their the selection with the Roto Brush, they use the Refine Edge tool to “paint” the region around the selected area in order to define what region needs to be scrutinized by After Effects to make an accurate selection. Well-lit, defined footage, with little compression or compression artifacts will key fairly well using the Refine Edge tool. It’s helpful for problematic situations like sky replacements and separating individual people from a background.

The image in video production is only half of the story, audio plays a big part of any production. Adobe Audition CC introduces several tools that work intuitively for the video editor. The first is the new Sound Remover. It’s able to remove complex sounds that span a range of frequencies that exist in the foreground of an audio clip, not just background hums like most noise reduction tools do. The new Sound Remover tool is intuitive by nature. As opposed to isolated numeric tools in a dialog box, the Sound Remover allows the user to “paint” out frequencies while using a spectral analysis of the audio file. The user can visually identify problematic sounds and brush over them with the cursor. The user then uses the tools in the dialog box to refine the selection and eliminate the unwanted noise.

There are several welcome interface upgrades to Adobe Audition CC such as options to color code tracks, as well as keyboard shortcuts that allow the user to work efficiently in multitrack projects. A new ITU Loudness Radar with a Radar sweep view is helpful in maintaining loudness levels throughout a project. The new Preview Editor saves time by allowing the user to preview changes to the audio waveform, in real-time, when using different effects.

The increasing number of video formats presented by new cameras and new technologies requires new tools to ingest and manage that data. Creative Cloud addresses this with upgrades to Prelude CC. Prelude CC now has support for file formats such as DNxHD assets, .aiff, .wav, and .mp3, as well as logging capabilities for REDCODE RAW files. As the other CC applications show, time efficiency is a priority for Adobe with the latest upgrade, Prelude CC shares in the effort to save the video professional time.

The updated interface is streamlined to allow for greater efficiency and keyboard control. Some of the biggest updates the Prelude CC user will observe is in the ingest process. Users are now able to rename files during ingest and set up naming structures. The processing of renaming a batch of clips is no longer necessary. The user is also now able to ingest portions of clips, instead of clips in their entirety. This saves on time, drive space, and the frustration of dealing with camera operators who set it and forget it. Recent upgrades have encouraged the editor to rough cut their footage in Prelude. This trend continues as Prelude CC allows the user to export their rough cuts directly to Adobe Media Encoder CC.

An apparent trend throughout the Adobe Creative Cloud is the integration of its suite of applications. This streamlining allows the use of assets across programs. In order to keep track of and organize large volumes of assets, metadata is used to catalog and categorize footage. The different applications in Creative Cloud can call upon this metadata to easily find, track, and organize assets. Prelude CC now allows the user to create metadata templates and to add the metadata information during ingest.

One notable exception to the Creative Cloud update is Encore, Adobe’s authoring software. Adobe Encore CS6 is still offered and available with a Creative Cloud membership, but it remains in the Creative Suite. It appears Adobe’s emphasis on video delivery is through the Web and as in-app content.

Adobe Story CC Plus is a script writing program with both online and offline capabilities. It offers a range of templates, from industry standard film and TV scripts to AV and multicolumn scripts. It’s able to breakdown a script for output to shot lists and shooting schedules. Story CC Plus is able to share these assets with other users.The true power of Story CC Plus is in its integration within Creative Cloud. Scripts from Story CC Plus can be brought into Prelude CC and added as searchable metadata to camera footage. The added metadata stays with the footage throughout the post-production pipeline, making it easy for the editor to search for assets when working in other Creative Cloud applications.

Adobe Creative Cloud is more than an update, it’s an integrated platform for generating collaborative creative work. The updates to familiar tools for video professionals only scratches the surface of what’s new and what remains to be discovered. The integration of the CC applications and services is noticeably increased and performs well. This newest version appears to be much more stable while bug fixes and updates are delivered with ease. Adobe is showing that the future of video isn’t an isolated element on a solitary screen, but that video is rich media content, ready to be integrated across multiple platforms.