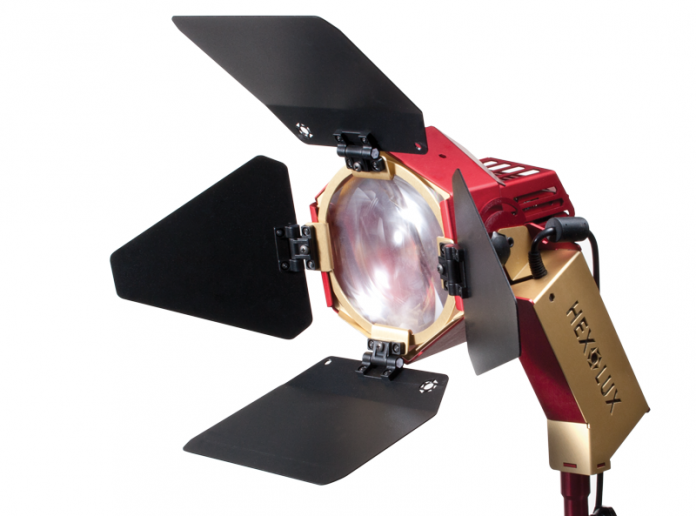 Light is a mind-boggling phenomenon. It is both a wave and a particle, travels at the incredible speed of 186,282 miles per second, and at the end of it all, has absolutely no mass. Considering all of that, it’s not hard to see why lighting is often the most difficult task in all of filmmaking. In fact, composing a perfectly lit scene often seems as elusive as the pot of the gold at the end of the proverbial rainbow. Even so, producers the world over demand breathtaking cinematography — regardless of how difficult it is. That’s why it’s so important for cinematographers to have the right kind of equipment that allows for the greatest amount of control over light. That’s just what Hexolux has set out to do with it’s Xum7 LED light fixture. The convenience and quality of the light is meant to help high-end cinematographers achieve the exact lighting conditions they need with speed and precision.

When first handling the Xum7 and the included barn door, one thing is abundantly clear: this is a fixture that is built to last. That’s because the Xum7 is made completely of lightweight red and gold anodized aluminum, which gives it a distinct, futuristic appeal. It honestly looks like the kind of light that Tony Stark would have made in his underground testing lab. Coincidentally, much like Stark’s famous suit, the light is also modular, meaning that it’s easy to transform from a single point-source to a Fresnel, soft box, or even a large array with a huge throw. This modular ability is due to the unique hexagonal design of the fixture. The design makes it possible to stack multiple units very tightly against each other in a honeycomb-like fashion using the convenient mounting points found on each side of the fixture. In addition, due to the close proximity of each light, the array of fixtures can serve as a surprisingly strong throw light that could illuminate an entire set or even serve as a replacement for a hot and expensive HMI light.

We truly love the modular design but we feel as if the unit is a bit bulky for some light stands at about 6lb. In addition, we found that the power adapter, which was encased in the same anodized aluminum as the rest of the fixture, made for an awkward mounting point since the light was skewed to one side of the mount making it more prone to tip over. That being said, we still like to give credit to Hexolux for finding a clever way to make something that’s usually in the way, a part of the design.

On the positive side, the unit we reviewed included a special set of barn doors which are just as impressive in quality as the light itself. We found the hinges to be smooth, yet solid, which allowed us to shape the light in a highly controlled fashion. No matter what angle we left each flag, it kept it’s shape, a sign of a truly professional piece of equipment.

The Future of Lighting: Now

Besides the modular design, one of the reasons why Hexolux’s new Xum7 fixture is so exciting is due to its inclusion of LED lighting technology. Though LEDs were once considered a dim, off-color, and expensive lighting technology, it has made significant improvements since it was first introduced to the lighting community and the Xum7 is no exception. Granted, the Xum7 takes 120 watts of electricity but it can produce up to 1,400 foot candles of light at five feet and a 15-degree spot. That may not be the highest in the industry, but we found it impressive nonetheless. Of course, if the 120 watts of the Xum7 just isn’t right for you, Hexolux also offers a version at 80 watts.

The LED lighting technology behind the Xum7 also ensures that the light stays cool to the touch even after hours of use. However, we did notice that the fan kicked in after only a few minutes of having the fixture at full brightness. This was a minor inconvenience as the fan stayed very quiet, never getting louder than the type of fan found in camcorders like the RED EPIC or RED SCARLET-X. That being said, we did find that there was a significant amount of heat coming off the first two inches of the surface of the Fresnel lens. However, the heat dropped off significantly after only moving back just a few inches, which means that gels and scrims shouldn’t be a problem on the Xum7.

One other benefit of having LED lighting in the Xum7 is that with proper use, the lamp should last for years. This means that the Xum7 will not only save you money on electricity costs, but on bulb replacements as well. This alone could make the investment of $1,785 worth it for studios of any size.

The Fresnel lens allowed us to create beams of light as narrow as 15 degrees and as wide as 60 degrees.

One of the long-standing complaints about LED lighting is the poor quality of light it produces. In the past, LED lights were known to create multiple shadows, have a skewed color rendering index, and were prone to flickering at low light intensities. With the Xum7, these issues are all in the past. Hexolux claims that the Xum7 has one of the highest color rendering indexes in the market of LED lighting today at 98. Considering that 100 is the highest color rendering index a light can have, that’s pretty impressive. During our tests we found that our light blended perfectly with other tungsten bulbs at 3200 degrees Kelvin. That is great news for cinematographers who need lights that match the color rendering index of the tungsten settings on their camera or who want to blend these lights with traditional tungsten lighting.

Due to its Fresnel lens design, we found that the Xum7 produced a single, clean shadow. In addition, the Fresnel lens also allowed us to create beams of light as narrow as 15 degrees and as wide as 60 degrees just by sliding the lamp back and forth within the housing. This gave us more control on both the brightness and the quality of light in our scenes.

Finally, we were impressed with the accuracy of the dimmer on the back of the Xum7. Not only does it lack a flicker at low light intensities, it also has the capability to lower the light based on f-stop values. This means that the Xum7 is not only a great light for high frame rate cinematography, it will work perfectly with lights that have scrims that use f-stop values as well. With a high color rendering index, light dimming, excellent build quality, and clever modular design of the Xum7, it’s clear that Hexolux’s future is very bright.

Dan Bruns is an award-winning cinematographer and editor.