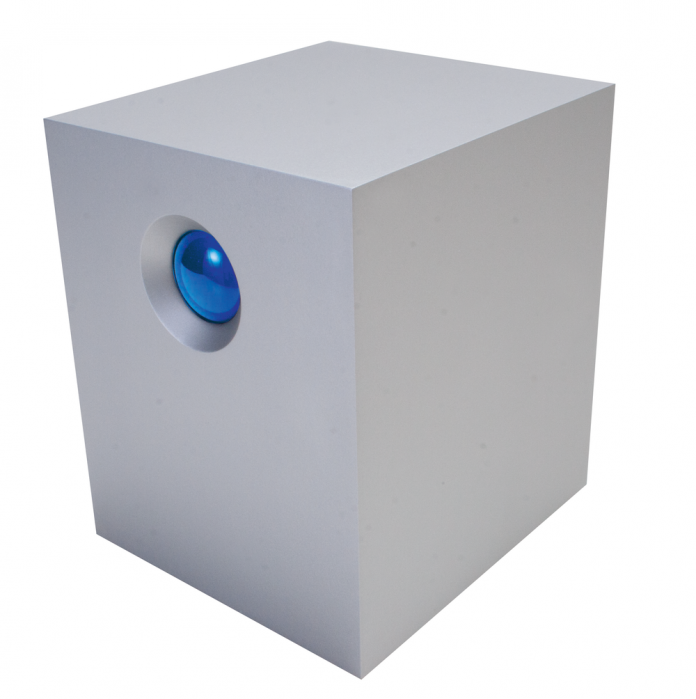 Oh the woes of being a video editor. Most people get along fine with their out of the box workstation, even for professional uses, but not us. While many creative professionals could use more power and more speed out of their machine, we face a somewhat unique problem: storage space. That’s where devices like the LaCie 5big come in.

At 10Gb/s, the Thunderbolt connection is faster than the read/write speeds of the hard drives contained within the RAID enclosure itself.

The LaCie 5big is a five bay RAID enclosure that uses a Thunderbolt interface to connect to your Thunderbolt-capable workstation. It is designed to be used by the professional video editor who needs a very large, redundant storage solution that’s fast enough to work directly off of without the need to move files to a local drive.

We’ve all been there. We have an external drive connected to our workstation, and need to edit video using the files stored on it. The problem is, the connection between the drive and the computer isn’t fast enough to handle our editing software constantly reading the files and writing new render files. What ends up happening is you have to copy all the video files you need from the external drive onto your local drive in order for them to be usable at all; not a great solution.

With Thunderbolt, we no longer have to worry about the limitations of the connection between the two peripherals. In fact, at 10Gb/s, the Thunderbolt connection is faster than the read/write speeds of the hard drives contained within the RAID enclosure itself.

The model we’re reviewing is the 5big 10TB. Listed at $1,200, this unit comes with the enclosure itself, a single Thunderbolt cable, and five hot-swappable 7200RPM hard disks.

The 5big comes pre-configured as RAID 0, and offers RAID 1 as an option. The 5big doesn’t support RAID 5, which is unfortunate considering it’s loaded with five drives. Being able to spread data across this many drives would offer an impressive amount of security, so it’s unfortunate that RAID 5 isn’t an option.

The 5big has a brushed aluminum exterior which matches the look of the current generation of Mac devices nicely. It features a very large blue orb on the front, which lights up when the RAID is active. The 5big looks great sitting on your desk next to your iMac or MacBook Pro, but the blue light can become obnoxious. What looks awesome during the day quickly becomes a distraction when editing at night or in a very dimly-lit room.

For this review, I had the 5big set up in my home office, which is two doors down from my bedroom. On a night I had several overnight renders queued, and with both doors open, the blue light was enough to spill into the hallway, reflect off my eggshell colored walls, and illuminate my room.

To test the 5big, we put it through a couple of tests using artificial and practical methodology, all on a current generation MacBook Pro with Retina display. The first thing we did was a disk speed test using Blackmagic’s Disk Speed Test utility. When in RAID 0 configuration, we saw write speeds of 533.1MB/s and read speeds of 536.5MB/s. (LaCie reports read/write speeds significantly higher than this, which could be attributed to our maxed-out speed test utility.) When compared to speed tests on our local SSD, which resulted in 322.9MB/s write and 411.5MB/s read, we can see that it’s actually better to edit from the external 5big rather than to transfer footage locally first.

As expected, the RAID 1 configuration was not as strong. Our write speeds were 171.3MB/s and read speeds were 162.5MB/s. In this case, it’s better to edit from our local SSD. However, better vs. worse doesn’t mean anything compared to a simple “does it or doesn’t it” test. For that we brought out the big guns.

We just so happen to come into possession of a few hundred gigs worth of ARRI ALEXA footage. These files are 2k ProRes 4444 files; more demanding than most editors use on a regular basis.

Since rendering is handled by the CPU, GPU, and RAM, what we’re mainly looking for is the hard drive’s ability to write and access data. For a video editor, this is most noticeable during standard video playback, so our test was pretty simple. Back in RAID 0, we loaded up a timeline in Adobe’s Premiere Pro with about six different clips, edited end-to-end, and attempted to play them back; smooth as silk.

Of course, the math certainly supports this. Since we found the read speed of the 5big to be 536.5MB/s, it stands to reason that there should be no problem reading the 330MB/s video clips. “What about split screen video,” you ask? Let’s try it!

Aaannd … no luck. The playback is choppy at best. That said, it’s important to remember that this footage has an extremely high bitrate. With that in mind, we loaded up some variable bitrate H.264 files from an EOS 5D Mark III. Without difficulty we were able to run four full-resolution videos without a hitch.

Overall we were happy with the results of the 5big in its RAID 0 configuration. But how did it fare in RAID 1? When mirroring data, read/write speeds are drastically reduced. Again we should be able to turn to the math. At 162.5MB/s, there’s no way the 5big should be able to play back our 330MB/s ALEXA footage. In practice, our suspicions are confirmed: the footage does appear choppy. The 5D Mark III footage, however, floats around 4.8MB/s, and therefore had no problem playing in real-time.

For our final test, we simply copied files from the local SSD to the 5big in RAID 0 configuration. Eight gigabytes were copied in less than 10 seconds. Any video editor used to working with external USB 2.0 drives will recognize this as astounding.

While using a RAID 1 configuration was not nearly as fast, for most uses, RAID 1 is the better option. The redundancy provided is too important. To anyone editing DSLR video, I would recommend this setting, even though it means cutting your total usable capacity in half. You will never have difficulty working with DSLR footage. Even Blackmagic Cinema Camera files in CinemaDNG RAW at 150MB/s should play back fine.

Is the 5big worth the $1,200 price tag? When you compare the 5big to its nearest competition, it definitely seems worth it. Similar Thunderbolt RAIDs can break $2,000 without a much larger capacity. The real question is whether or not it’s worth the money versus something like LaCie’s own 4big Quadra. For the same price you can get 2TB more if you’re willing to give up Thunderbolt for USB 3.0.

If you need to archive a lot of video, or are a video editor working with terabytes of footage, having a large, high performance RAID connected to your workstation is a great resource. The 5big performs where it counts and looks cool to boot. If you need the speed and convenience of Thunderbolt and are content without a RAID 5 configuration, the LaCie 5big Thunderbolt RAID is highly recommended.