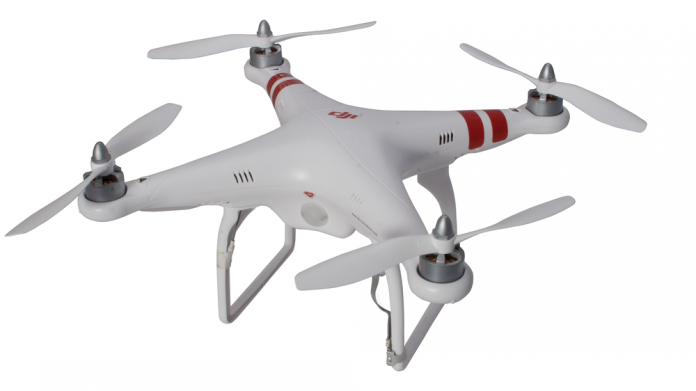 Have you ever dreamed about getting into aerial videography but were daunted by the complexity and high cost? DJI Innovations’ Phantom quadcopter, with its simple operation and comparatively low cost, may be your answer. The Phantom is a ready-to-fly quadcopter optimized for a GoPro HERO. It comes with all the parts necessary for flight, including a 6-channel transmitter, a camera mount, a lithium polymer battery, a charger, a spare set of propellers and software.

There is no way to talk about the Phantom without first admitting that it is pure fun. For just a moment, forget about creating cinematic flybys and perfectly stable tracking shots; flying a Phantom will simply make you feel like a kid again.

Of course, like kids, we probably didn't spend the time we should have reviewing the manual before attempting our maiden flight. Fortunately, the online video tutorials were all we needed to get airborne without seriously damaging our new airship.

It certainly helps if you have flown remote controlled aircraft before, but it isn't critical. We had a little experience flying R/C gliders be we had never flown a helicopter or multi-rotor aircraft so the action of the throttle and yaw controls were new to us.

The Phantom lets you know what's going on with flight modes, acquired satellites and inertial measurement unit (IMU) status with an LED light that indicates red, yellow and green in a variety of sequences and rates. It took us a while to understand the important ones, but DJI gives you a handy one-page PDF that is a good reference for all initial flights. In fact, we found we referred to this sheet enough to warrant getting it laminated so we could leave it lying around on damp grass.

We flew the Phantom to about 100-feet away and about 100-feet high when we turned off the transmitter. It was a bit scary, but it flew over the lift off point, hovered, then slowly landed near where it took off.

The Phantom is, of course, more than just a fun toy. It is a very capable video and photo aerial platform. To get the most out of this aircraft you will need to reduce vibration to a minimum. You do this by balancing each of the four propellers by using a prop balancer and sanding off the heavier sides of each blade and/or using balancing tape. There is information about how to do this, vibration dampening mounts and even selecting non-stock props at phantompilots.com.

For our tests we used stock propellers, balancing each one. We used a GoPro Hero3 Black and set it to capture video at 720p/60fps. Since we had plenty of rough landings, we also recalibrated the Phantom's IMU using the included NAZA-M software. We also calibrated the Phantom's compass. DJI provide instructions for this process, but we also watched their helpful how-to videos.

The Phantom has several flight modes. The GPS mode attempts to return to a hover after moving in one direction and releasing the control sticks rather than continuing in the same direction. We enjoyed flying in this mode but the Phantom's automated quick course corrections in this mode made for very shaky video. We ended up using the attitude (ATTI) mode while shooting video as it did not make any automated course adjustments other than returning to level flight when we centered the control sticks.

There is also a manual mode you enable through software but we did not feel brave enough to try it.

The Intelligent Orientation Control is perhaps the best feature for those of us not used to flying RC helicopters. It has two modes; Course Lock and Home Lock, both require you to enable them through software. Course Lock lets you fly the Phantom regardless of which way the quadcopter is pointed with forward/backward and left/right controls maintaining their normal function. Home Lock works similarly but the left/right control will make the Phantom circle around the recorded Home location.

Finally, we tested the go-home and land failsafe mode. This only works when you have acquired six or more GPS satellites. We were in a very large open field with no trees around, had more than six satellites and very little wind. We flew the Phantom to about 100-feet away and about 100-feet high when we turned off the transmitter. It was a bit scary, but it indeed flew over the lift off point, hovered for a brief moment and slowly landed within a couple yards of where it took off.

Flying the Phantom is, above all, fun. Our test video looked very good, with little to no wiggling effect, especially after we balanced our propellers and had a little more experience in the air. The Phantom can get you angles you've never before been able to capture. But profitable? No. At least for now, the FCC says you can't charge people for footage from your new toy (see our feature, Attack on the Drones on the legalities of shooting with drone cameras from our August 2013 issue).

In all modes, we did have some trouble maintaining the same altitude in a hover. Even without any wind or throttle movement, the Phantom tends to drift up and down a little requiring us to constantly nudge the throttle to maintain altitude. Make no mistake, this is not a replacement for a jib.

Perfectly stable and level footage is the Holy Grail. But to get this, you may find you have to spend more money and time than you initially thought. A good two or three-axis brushless gimbal is about the only way to achieve this footage and most are expensive. There are several third-party gimbals currently available and DJI has its own.

The Phantom is a well-built, well-engineered and relatively low cost aerial video platform. Just remember to save some cash for accessories such as extra batteries, maybe a gimbal and lots of replacement propellers.