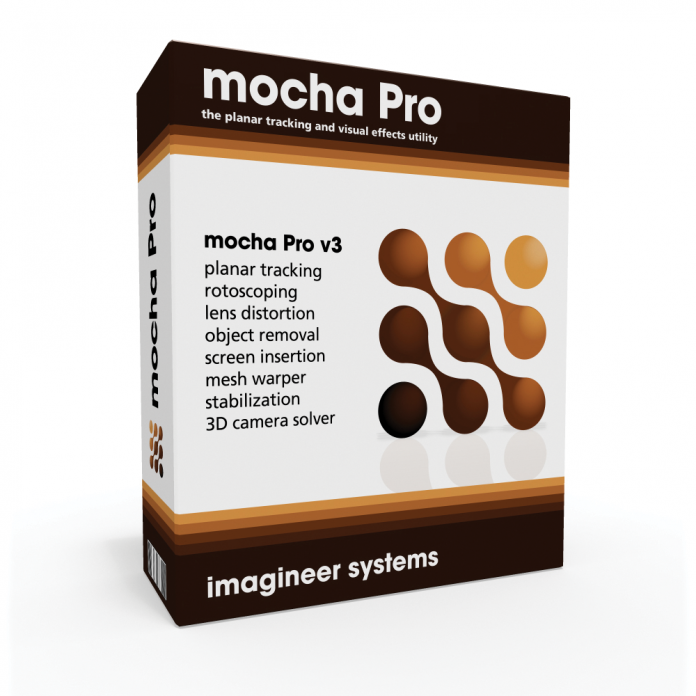 After sneezing, many of us reach for a Kleenex. If the mood strikes we might hop in a Jacuzzi, Google an answer, use Q-Tips to get out some gnarly earwax, go for a Jet-Ski or Xerox a document. Of course, we know that all of those are not a specific products, but rather, trademarked name brands that have become synonymous with their products. Just as Kleenex is known for tissues, Jacuzzi for hot tubs, and Google for Web searches, Imagineer Systems’ mocha Pro has become a name synonymous in the production world for being the go-to tool for motion tracking.

Mocha Pro and mocha AE – Imagineer System’s tracking and rotoscope tools for Adobe After Effects and Final Cut Pro users – have been simplifying the lives of visual effects (VFX) artists and motion graphic designers at many levels for many moons. mocha Pro has made its mark on features such as The Hobbit, and with a bare bones version packaged with After Effects, it is nearly universally accessible to those who are looking for something more powerful than After Effect’s point tracker.

So what does a planar tracker do that a point tracker doesn’t? Well, instead of tracking a single point a planar tracker such as mocha Pro v3.1 will allow users to draw simple spline shapes onto footage to define surfaces – which are large areas of pixel data – that the tracker will follow, providing better tracking data for your composite. For instance, let’s say we would like to add some text to a building's signage, and the footage is a dolly-in to the front of that building. They’ll need to track the camera move to make sure their text sticks to the building in a convincing way. We can define the entire surface of the building in mocha Pro by drawing a spline shape around the exterior shape of the wall and beginning a track. We may also add a spline to track the door or another surface in the shot to improve tracking results. This tracking data can then be used to composite the text onto the building. Similarly, you could track parts of a face to add a Mike Tyson-esque tattoo, or perhaps an electronic device like a phone or tablet if you were looking to replace the screen contents. The possibilities are limited only by imagination … or project scope.

Creating multiple splines to define more than one tracking surface improves accuracy to the point where the need to worry that blurred motion or quick camera moves will wreck a track are nearly eliminated. With point tracking, your blurs and fast movement will quite easily outsmart the tracker. To put it simply, planar tracking, done correctly, can yield much more consistently accurate tracks than a simple point tracker.

Mocha Pro v3.1, however, is much more than just a planar tracker. It is an object removing, camera stabilizing, lens calibrating, 3D camera solving dynamo.

Has its developers again pushed the tool to do more, with greater consistently and accuracy, all while becoming easier and more intuitive to use, or have they missed the mark? We took Imagineer System’s flagship out for a test spin to find out. 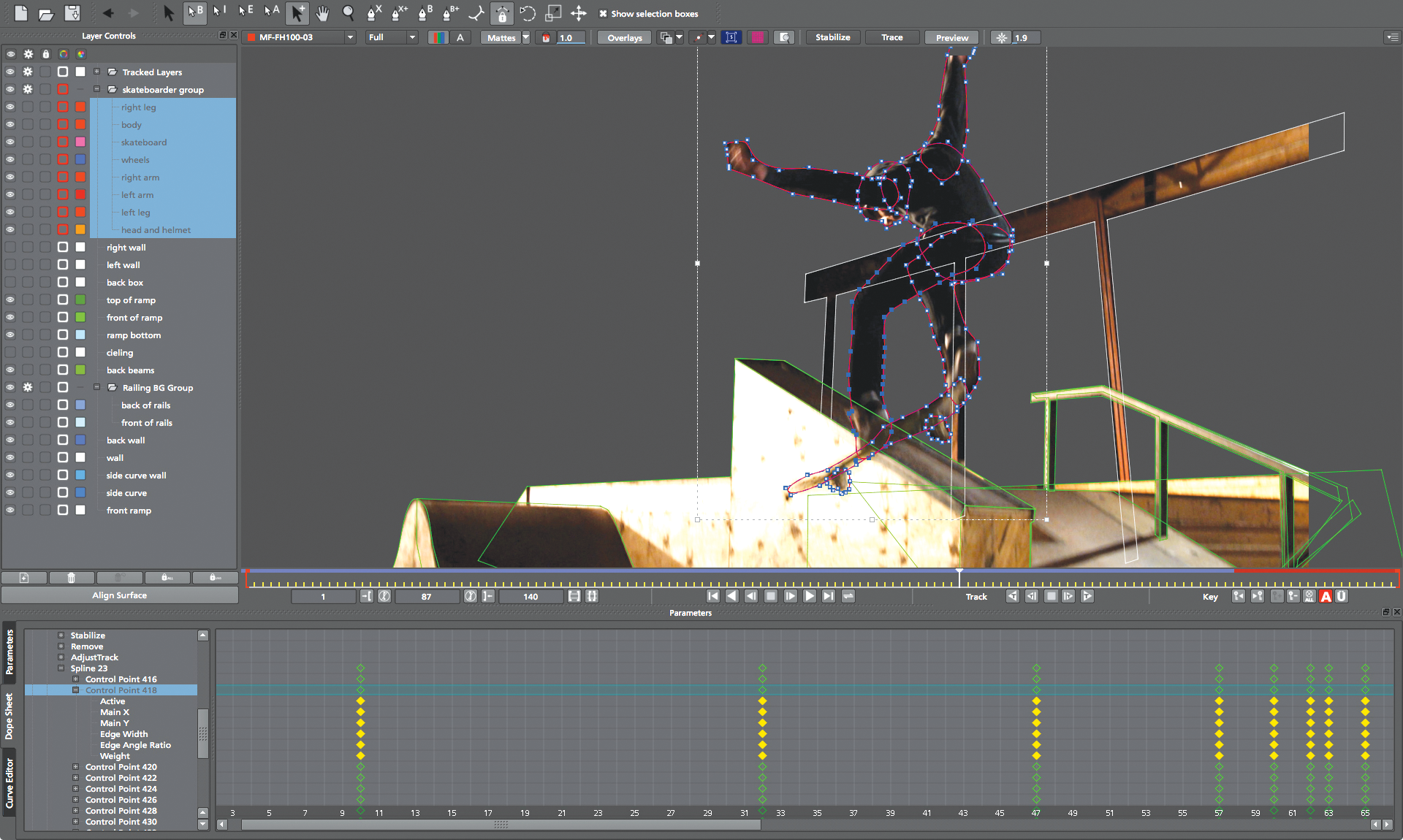 Putting Mocha Through the Grinder

Getting started with mocha Pro v3.1 begins with installing the software on a machine.

This was as simple as opening the DMG file (on a Mac), which shows the contained application. Even with activation, the installation on a 2010 MacBook Air took less than a minute.

Installation of the various mocha plug-ins (all free either with After Effects or when mocha Pro v3.1 is purchased) is done separately for each one, and it’s a bit more time consuming, but there are release notes that help make the process quick and easy.

To get the most out of our time with mocha Pro v3.1 we ran it through a series of tests to find the limits of its tracking ability, wondering if we could throw it off the scent of our scenes.

Our first test involved adding text to a moving object in a scene. In this case we wanted to add text to the hood of a car as it drove towards and past the camera. The shot had buildings on either side of the car, but we chose to add splines to different distinct shapes and planes on the car. We chose the grill, the windshield, and a side door.

With a little tweaking, the shot tracked perfectly, and we were able to apply the tracking data to our text in After Effects then, voilá! We had created a shot much akin to a NASCAR TV production.

For our second test we tried to remove an object from a scene. We shot a bit of footage of a tablet, then stuck an Apple sticker to the back of the tablet.

Seeing as we’re not object removal aficionados yet, we took a look at a few of Imagineer Systems’ training videos. The one in particular we selected for object removal was created and narrated by Imagineer’s Santa Monica-based Product Specialist, Mary Poplin.

At absolutely breakneck speed, Mary deftly demonstrates how to easily remove the Apple sticker from the back of a tablet in our footage. It is as simple as tracking a background layer – in our case, the outline of the tablet was used as a guide for our spline shape, thus tracking the surface of the device – then rotoscope a foreground layer, which is essentially defining a shape around the item we would like to remove, click on the remove tab in mocha Pro, create a clean plate base (a single clean frame of the footage) and clean it up using Adobe Photoshop – this involves fixing a frame of the footage by painting out the object we want removed – and then rendering the repair into place by using mocha’s Remove tool to reference the repaired frame.

It may sound a bit complicated, but the clean and intuitive user interface, snappy performance of the tool and the wealth of online training allowed us to successfully remove the sticker from the scene (though our Photoshop skills are slower and generally less awesome than Mary’s). 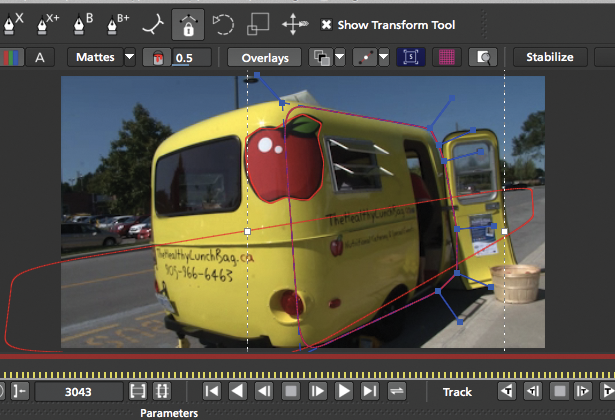 With the ability to create astonishing, consistent results, and deliver on a multitude of platforms, mocha Pro v3.1 is a professional-grade piece of software. It should be mentioned that the good folks that hand out Academy Awards – yep, those ones – honored Imagineer Systems for their contribution to motion pictures, awarding a Scientific and Engineering Award for mocha’s planar tracking.

Mocha is one of those rare pieces of software that has transcended the realm of mere third party application or plug-in to become as essential to a motion graphic designer or VFX artist as paintbrushes were to Michelangelo. Or perhaps a better example would be a trowel to a bricklayer. The truth is that mocha has become a standard tool to an industry. Many of us see mocha as part of After Effects, or part of Autodesk Smoke. It’s one of our tools, and an exceptional one at that. The quality of our final result still depends on a set of skillful hands, but as with any good craftsperson’s work, a poor result can’t be blamed on a tool.