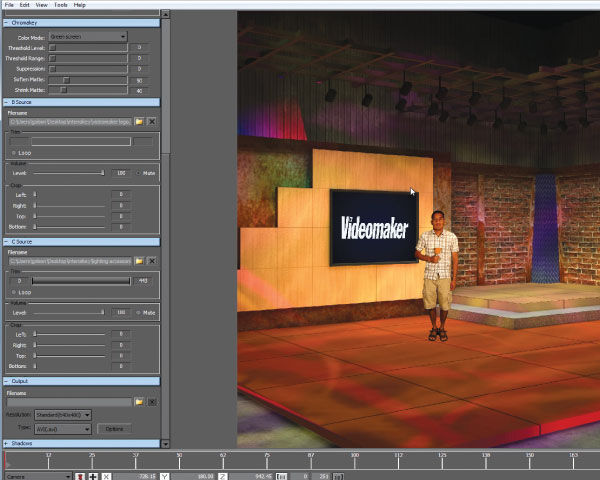 We’ve all seen the slick virtual sets on TV, and for the average video producer, creating a 3D virtual studio and being able to fly a camera around keyed out, properly placed talent seems unfeasible. intensiKey aims to let video producers with some basic skills do just that.

For $299, you get a simple piece of downloadable software that allows you to import your raw green or blue screen footage, place it within one of five included virtual sets, and use up to two additional video or graphics sources within the virtual monitors on the set. You can then use the camera to create sweeping moves to enhance the effect of the 3D set. The intensiKey Virtual Set Pack Volume 1 contains 20 additional sets for $499, or you can purchase sets individually for $99.

It doesn’t require a deep knowledge of keying, or 3D, but viewing the demo and tutorial on their site is a must before firing up the program. It’s also a good idea to read all of the help files within intensiKey to ensure you know which buttons and panels do what. Admittedly, we attempted to just dive in and go, and quickly found ourselves stuck.

To take it for a test drive, we imported one of the five included preset studios, and then loaded in a head to toe green screen shot. intensiKey pulled the green out automatically, but we did have to manually choose our aspect ratio from a drop-down box. We intentionally chose a shot that was difficult to key out in other programs. The built-in keyer was very effective, and the controls to fine-tune it, such as threshold, color suppression, soften, and shrink quickly refined our shot to a great looking key. We were able to trim the clip within the program, and adjust the audio level as well. The crop function worked well to get rid of the extraneous parts of our green screen footage, but the lack of a garbage matte limits the flexibility. Using the mouse to scale and place our subject within the 3D studio was easy and responsive. One lacking feature is a set of color correction tools to help blend our shot into the set.

Now that we had our subject placed, it was time to add some camera movement to really take advantage of the 3D space. Using the mouse to move the camera was fairly easy. We’re familiar with how keyframes work, but those who are new to keyframes may have a bit of a steeper learning curve to get the hang of it. When we attempted a single camera move, the controls and keyframing were adequate, with buttons to move quickly between keyframes, and a simple add/remove keyframe button. We were able to create some complex movements that worked well. Our attempt at multiple camera moves was a bit more challenging. We found it difficult to create an initial camera move, have the camera stop for a period, and then have the camera move a second time. The camera always seemed to keep moving between the first and second move, and ultimately, the lack of fine-tuning controls for multiple moves caused us to stick with one camera move. But even the single camera move sells the 3D environment well, and the sets scale and move perfectly with the subject. The previews aren’t in real-time, but they generate very quickly, and the quality is definitely good enough to test out your moves.

Once you’ve got your subject placed and your camera move down, you can add footage or graphics within the virtual monitors on the set. This is a great way to have a clip or logo placed within the set, and is an easy way to customize the look of your space. You can place the logo, then trim, loop, and crop it to ensure that it’s filling the whole scene. Some sets included two different sources, while some contained only one. If you want to have more than one clip play in sequence in a monitor, you’ll have to put them together in a standard editing program before bringing a single clip into intensiKey.

There is support for a wide variety of ever-expanding video formats in intensiKey. Starting with 20 video formats that can be imported at the time of writing, as well as four major picture formats. We imported 1920×1080 QuickTime H.264 footage, and while the audio and video didn’t sync well in previews, intensiKey remained snappy in its responsiveness.

In addition to the supported source formats, intensiKey has a plethora of export options, including QuickTime, MP4, AVI, MPEG2, WMV, FLV, and even an option to output a series of still frames. No matter what your preference, you’ll be able to pick the proper format and bring it into most editing programs. And the render times are very fast. Our 10-second clip with a big camera move rendered out a 1920×1080 QuickTime file in less than 10 seconds. We easily imported the clip into Adobe Premiere Pro and it played flawlessly.

Go Check It Out

The hosts bill intensiKey as a powerful, yet easy to use software. With it’s robust keyer, well designed virtual sets, simple interface and clear purpose, it really does deliver on that promise. If you can make do with the included sets, the price seems fair for what you get. Meanwhile a producer who is used to precise camera controls may find it a bit frustrating but average users are sure to be satisfied with the results. You can also download a free trial and give intensiKey a spin yourself.

intensiKey integrates a keyer, 3D sets, and the ability to move a camera into one program. With a robust keyer, quality sets, and good price point, intensiKey really is powerful, and easy to use.

Greg Olson is an Associate Editor for Videomaker.