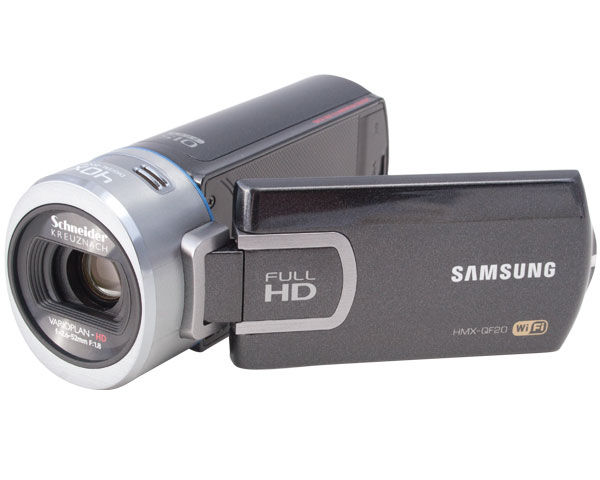 Samsung’s HMX-QF20BN camcorder is a very small, palm-sized camcorder, capable of producing big results. Despite its tiny form it comes packed with a number of interesting features, not the least of which is its ability to shoot upright video – while upside down – making it capable of both right and left-handed shooting.

Noticeably devoid of external buttons, the QF20 has a sleek appearance. A switch on the right side of the lens housing manually opens the lens cover. If you turn the camera on, with the cover in the closed position, a flashing warning on the display invites you to check the lens cover.

The lens is a Schneider Kreuznach with an aperture range of f1.8 – f3.9, excellent for gathering loads of light at any zoom setting. It records in 1080/60i HD using H.264 recording and MP4 video file formats. A label atop the lens housing heralds its 40x digital zoom capabilities, however, the much more desirable optical zoom for this camera, is 20x. Very nice indeed! The only other features located on top of the camera are the stereo microphone and another label noting that the optical image stabilization system is of the Duo+ variety.

As there is no power button, switching the device on or off is accomplished by simply opening or closing the 2.7-inch flippable touch screen display. On its outer edge is the charging status LED. Several touch buttons and status indicators appear on screen with a single physical button to the side of the screen for accessing the various menu options. Behind the display, a sliding port cover on the main body hides the AV, HDMI and USB 2.0 ports.

At the rear is a control pad with the record button in the center of a four-way rocker panel. Pressing the panel to the left or right controls the zoom functions while pressing up or down activates the My Clip function, used for tagging favorite scenes for extraction at a later time. Above the control pad is the DC-in port and cover.

The adjustable hand strap dominates the entire side of the camera, while the bottom houses the tripod receptacle and both the battery and memory card slots. The QF20 has no internal storage, which keeps the price down, but instead uses SD type media cards in a variety of capacities: 1-2GB SD; 4-32GB SDHC or as much as 64GB SDXC.

Navigating the various menus and settings options is fairly intuitive and straightforward, although the touch screen isn’t always as responsive as one would like. The upper left corner of the screen indicates the current shooting mode. Below this are four touch-sensitive areas for switching between video and still recording, adjusting zoom and the playback functions. The physical “Home” button at the left of the display pulls up the various menu options. The available functions depend on whether video or photo mode is selected. In video mode, Smart Auto sets everything to automatic while Manual allows you to tweak the exposure value, backlight compensation, focus, white balance – using several presets or a custom setting, and Super C.Nite, which adjusts the shutter speed for low light shooting. In photo mode, you can manually adjust white balance, exposure and backlight compensation – plus, you have a self-timer and continuous shot mode to take as many as eight photos in one second.

Another menu option includes Art Film, which enables shooting with Black & White, Sepia, Negative, Art, Noir, Western and Dazzle presets. Several Art Time Lapse options are available, photo album access and Vertical HD recording. This allows you to hold the camera on its side with the LCD pointing straight up or down to record video in a portrait orientation.

A second page of menu options lets you access the Wi-Fi settings to wirelessly upload your images to sites such as Facebook, Picasa and YouTube, automatically backup images to your PC and view your work on a TV Link-enabled television. Finally, you have a Settings menu for fine tuning the shooting, playback, display, connectivity and general settings.

At a mere $350, no camcorder can be expected to measure up to the standards of its pricier brethren, however, the QF20 does manage to perform surprisingly well nonetheless. At 5.1MP, still images don’t have quite the punch and crispness as the many double digit megapixel offerings out there today, but that’s to be expected. Video performance is quite respectable with accurate color reproduction, good contrast and, while not spectacular, at least adequate low light performance, with acceptable noise levels for this price range.

And of course, there’s the Switch Grip 2.0 technology, which allows you to switch hands without missing the shot. We lefties can now feel right at home by rolling the camera over, bottom side up, with the LCD on the right side of the camera. The display image rights itself and on playback you can see that the image starts to roll to the vertical but quickly corrects and continues to record in normal fashion.

As controls are at the rear of the camcorder and on the LCD screen, they are just as accessible now with the right hand, as they are with the left. Right-handers can always practice external camera operations if the left hand is steady. When it comes to camera features as a whole, more control generally equals more professionalism, being able to use your left and right hand is simply great practicality.

If youÃÂre looking for a budget priced, ultra-compact consumer camcorder, with good performance and either-handed shooting capability, then look no further than the Samsung HMX-QF20 with Switch Grip 2.0 technology.