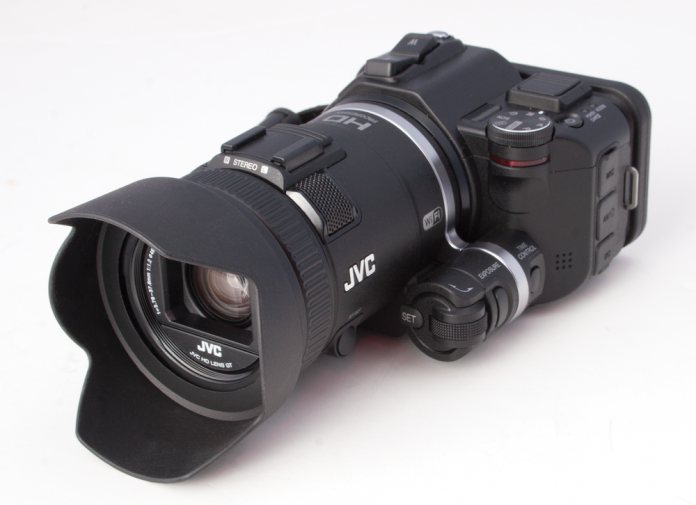 From its inception, capturing beautiful images in cinematography has relied on seeing the world in a fresh, new way. Whether that meant getting incredibly close to an subject’s eyes or seeing the world from the inside of a mailbox, audiences have always yearned to see scenes from angles that are impossible to see in real life. That’s one of the main reasons why slow-motion, and high frame rate, cinematography is so popular. People simply love studying the detailed nuances that slow-motion cinematography can provide. Camcorder companies like JVC are well aware of this. That’s why they created the GC-PX100. With it’s ability to shoot video up to 600 frames per second and at $1,000 JVC makes its mark in the world of affordable high frame rate recording.

For night games, the GC-PX100 has a fast ƒ/1.2 lens which will allow cinematographers to capture noise-free images even if the game goes into extra innings.

One of the first things people notice about the GC-PX100 is its truly unique design. With its diminutive size and manual controls, JVC seems to be trying to split the difference between the convenience of a DSLR and a traditional camcorder. The resulting strange form factor is a surprisingly ergonomic and functional camcorder that accommodates a large aperture ƒ/1.2 Ã lens, a zoom rocker, a tiltable LCD screen, two shoe slots, an optional viewfinder, an SD card slot, and a bevy of inputs and outputs into its design.

The bold body choice of the GC-PX100, while unique, does helps us appreciate it’s useful features. One of the features we really liked was the weight of the camera. At 1.3-pounds, the GC-PX100 is one of the lightest camcorders in its class. This means that shooting your friend’s or child’s hour-long baseball game shouldn’t require several trips to the weight room before the shoot. Much of the reason for the minimal weight of this camera can be attributed to the small, lightweight battery the GC-PX100 uses. The 1460mAh Li-ion battery is small, yet surprisingly powerful due to the efficiency of the internal electronics. In fact, we found that the battery lasted for almost two solid hours of intermittent recording.

For night games, the GC-PX100 has a fast ƒ/1.2 lens which will allow cinematographers to capture noise-free images even if the game goes into extra innings. As with most zoom lenses though, the f-stop does drop to f/2.8 as the image is magnified up to 13x. In our tests, we were easily able to tell the difference in brightness between the wide and telephoto zoom lengths of our image. As such, most cinematographers would be well-advised to sit close to the action so that zooming won’t be required.

Great looking shots require a great looking monitor and the GC-PX100 has just that. Its 3-inch LCD monitor has one of the better looking images we’ve seen at this price. The color is rich and accurate and the picture is very bright—even in outdoor situations. Additionally, JVC included a spring-loaded hood that blocks much of the glare from hitting the screen in bright light. The LCD screen also tilts vertically which made high angle and low angle shooting easy. The LCD is not able to hinge horizontally, however, which limited our ability to get great shots in tight situations. The menu system on the PX-100 is accessible through the same LCD touch screen. Though we felt that the menu system was easy to understand and the touch screen was very accurate, we did notice that the button delay was long enough to be a nuisance.

As for controls, the PX-100 took a note from traditional camcorders by including a standard zoom rocker, a manual control dial, which can switch between controlling aperture or shutter speed, a dedicated high-speed recording dial, a focus ring, and a pair of shoe slots. One of these is a hot shoe that allows users to take an optional viewfinder on and off the back of the camera while still leaving room to attach microphones and lights to the front.

Another great design feature is the plethora of inputs and outputs that comes with the PX-100. Unlike many DSLR cameras, the PX-100 has both a microphone and headphone jack in order to aid the quality of sound in the camera. JVC also includes an HDMI, AV, and USB output on the camera for flexibility in video output.

Great features and versatile controls are wonderful items to have on a camcorder but it’s all for naught if it doesn’t produce great looking video. To address this, JVC included a 1/2.3 inch backside illuminated sensor in the PX-100. Not only is the size of the sensor rather impressive for a camcorder in this price range, but with the natural noise-suppression capabilities of back-illuminated sensor technology, we noticed that dark areas of the image looked good no matter what the lighting conditions were.

JVC’s excellent sensor technology and speedy processor also make for excellent image quality. In our tests, we found that there was virtually no rolling shutter which was very impressive considering that even a high-end camcorder might struggle with the issue. The quick processor also means that the camera shuts off and powers up very quickly. In our tests, it took four seconds to power up the camera and 1.5 seconds to power down. This allowed us to never miss a shot even if our camera was powered down.

A Need for Speed

The most exciting feature this camcorder's quick processor provides is the ability to shoot at frame rates up to 600 frames per second. This frame rate captures enough to be able to analyze golf swings, running form, and pitching style which makes it perfect for athletes looking to improve their game. In fact, JVC has even developed an app for coaches to record video of athletes on tablet devices using the PX-100. To do this, JVC includes a Wi-Fi transmitter in the GC-PX100 that can broadcast a video signal in near real-time to a tablet device. Once connected to the camera, it is possible to quickly export up to 12 stills of the most important part of the athlete’s movement. However, even if you’re not a coach, we found the app was still quite useful for controlling the camera from a distance and playing back the footage in slow-motion instantaneously on a much larger screen.

Though the speed of JVC’s processor is quite remarkable, it still only allows for a resolution of 320 by 176 pixels at frame rates of 480 or 600 frames per second. We found that this resolution is noticeably blocky during playback which often led us to shoot at a lesser frame rate of 300 frames per second in order to get a decent resolution of 640×360 pixels. However, considering where the technology is today and the price of the camera, we still felt like the high frame rate capabilities of the PX-100 are truly noteworthy. Also noteworthy is the ability to play the high frame rate footage in slow-motion on the camera’s review menu. This meant that we were able to analyze our slow-motion footage just moments after we shot it — a time-saving feature for athletes looking for an instant replay.

Overall, we found that the ability to record at 300 frames per second in such a lightweight package, and at a price of only $1,000 makes the GC PX-100 a real winner in the world of affordable high frame rate cinematography.