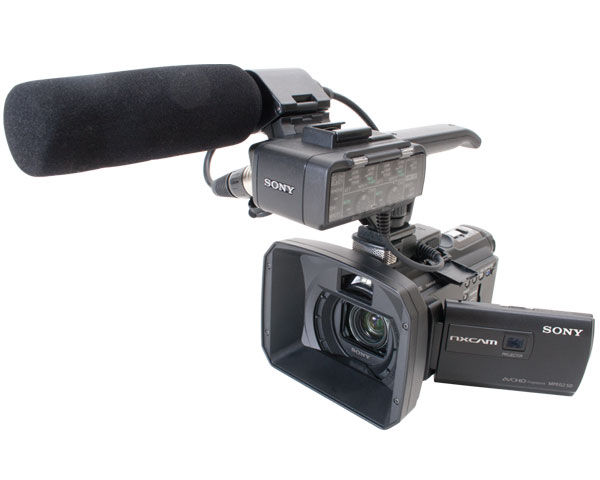 In the wide world of HD camcorders, the Sony HXR-NX30U is a low-fuss, feature-rich competitor with a lot of promise and more than a few surprises.

You… and This Army

Out of the box, the NX30U is unassuming. A small black camcorder: the onboard microphone perched atop the lens and a good-sized LCD screen hugging the left side. As the accessories emerge, it’s apparent that it can dress to impress. A lens hood, shotgun mic, XLR adapter/handle, wireless remote and a selection of cords complete the entourage. The battery is small and light, yet provides power longer than expected.

Fully decked out, the NX30U screams, “Let’s do some serious shooting!” The optional XLR adapter/handle has ten switches, two dials, a shotgun mic holder and it plugs directly into the Active Interface Shoe atop the camera. The dials and switches provide extensive control over two XLR inputs; from channels and gain control, to phantom power. The lens hood secures to the front of the camera, and while it blocks the onboard mic, the shotgun mic reaches neatly over it. The included shotgun mic and windscreen are barely seven inches long yet provide good quality audio.

At the heart of the accessories is the NX30U itself. Open the LCD panel or extend the viewfinder and it wakes, the lens protector snaps open, ready to shoot stellar video. The exterior is simple and sleek and the input ports hide behind small sliding doors. As the majority of features are accessible via the touch-screen, only a few buttons are present on the housing.

On the front left of the camera you’ll find a dial that functions as a manual control for focus, exposure, iris, shutter speed, AE shift or white balance adjustments, but only one at a time. The remaining settings run on automatic control. And while experienced shooters can tell you automatic features aren’t perfect, their response time is respectable as long as the shooting conditions don’t change too fast. Indoor and outdoor shooting returns quality video and stills. The indoor shots are grainier when at 24db gain, but the quality is still very reasonable.

The NX30U comes with a hefty 96 gigabytes of internal memory, which is good even at its preferred HD format. It has nine 1080 recording formats with various frame rates and qualities and two 720 options. For compatibility, it can record in old-fashioned standard definition, but only if you ask nicely. However it won’t stoop to recording on tapes. Instead of a tape deck, it sports an SD card slot on the side for extra recording space. That said, 96 GBs is enough to record nearly 7.5 hours at the highest quality setting. Simply put, you’ll change batteries several times before the onboard memory is full.

Bring on the Goodies

This camera has several secondary features to make shooting easier, or at least more fun! The NX30U has an onboard light to help in dim shooting situations. The NightShot button activates night vision, complete with infrared light. You can film subjects up to about 10 feet away in total darkness with that greenish look any covert ops film should never be without. If the onboard light is turned on simultaneously, it provides impressive night shooting that is nothing short of amazing.

The NX30U also offers excellent shooting aides. The guide frame option superimposes a tic-tac-toe grid on the LCD screen to help compose shots using the rule of thirds. Zebra stripes can highlight overexposure at either 70 or 100 percent.

Another great feature is the optical image stabilization. The lens actually moves inside the front of the camera to counter accidental bumps and jolts, making handheld or walking shots smoother.

Yet another snazzy feature is the internal GPS. When activated, it finds its current location and includes it with recorded video files. While it does tend to get lost and confused indoors, outside the NX30U seems to have little trouble getting its bearings.

The coolest feature by far, however, is the tiny projector on the back of the LCD screen. It literally projects recorded video and pictures onto any surface; from a white napkin to a lightly colored wall. It doesn’t do well under bright lighting or long distances, but in a reasonably dim room or close up it’s a whole lot of fun. It feels like you’re screening your own work in your very own theater.

A small downside to the touch-screen interface is the fingerprints. At the end of a few good shoots fingerprint smudges and smears cover the LCD screen, which can obscure the image. A little quality time with a chamois and it polishes to a shine, but since it’s a touch interface, a less print sensitive material could be better.

The Sony HXR-NX30U is HD video in a conveniently small, feature-rich package. It provides portability and plentiful recording space alongside an upscale microphone setup. It’s quite suitable for the intermediate video enthusiast looking for a powerful yet nimble video camera for everything from home videos to documentary filmmaking.

A solid HD camcorder for both business and pleasure.