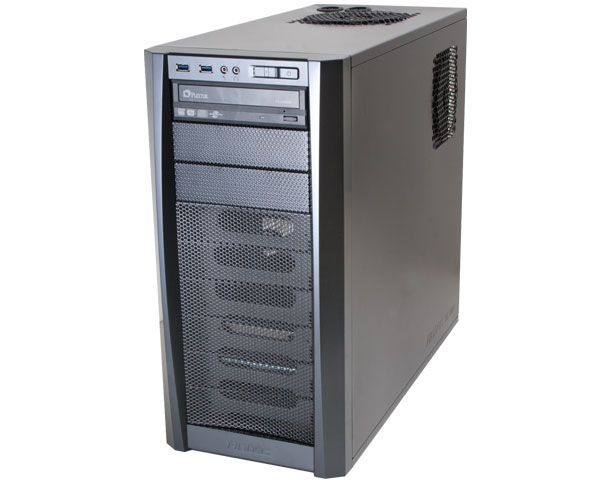 In the past it was easy to run out of memory in a computer. In recent years however the size of available memory has surpassed the amount needed to run even the most demanding programs. You can have multiple programs open and barely use 8GB of memory, which currently sells for as few as 40 dollars. DV Nation came up with a use for all this extra memory, turn it into a hard drive and use it for running applications.

RAMCache uses your computer’s memory to store data while it is being written to the hard drive along with storing frequently used data. All hard drives have on-board cache but it is usually limited to 16-32MB. DV Nation uses a program called SuperCache by SuperSpeed for the RAMCache on this computer. The computer has 6GB of RAMCache on both the SSD and SSD Hybrid drives. The most noticeable difference is that RAMCache increases the responsiveness of the hard drive. For example on the SSD hybrid drive, the test of small 4KB files runs at 0.67MB/s with the cache turned off and 526MB/s with cache turned on. When testing render speeds in Adobe Premiere Pro however there was little difference in render time with the cache turned on versus off.

The idea of using memory to store data has been around for a long time. The biggest problem is once your computer is turned off, the data is lost. To solve this issue when the computer is turned off everything in the RAMDisk is written to the hard drive and then loaded back into the RAMDisk when the computer is turned back on. The disadvantage of the RAMDisk is you can lose your data if your computer is not turned off correctly and the computer takes longer to boot since it has to copy the data back to the RAMDisk. A data backup is a possible safeguard, and DV Nation recommends using an uninterruptable power supply and putting the PC to sleep instead of shutting down. The benefit however is the RAMDisk has near instant response times, can handle 1,000,000 input/output operations per second (IOPS), and has a huge constant throughput, 6,300MB/s. With Adobe Premiere Pro installed on the RAMDisk, it loads in mere seconds. When dealing with large video files loaded in the RAMDisk there is no noticeable delay in editing. When rendering files with Adobe Media Encoder however there was about a three percent performance boost with the major bottleneck being the CPU.

What’s It Made of?

The RAMRod Ultimate Workstation looks like your ordinary tower, sporting an Antec 302 case. There are a few lights in the case, but nothing too distracting. With the 2.5-inch wide hard drives and the water-cooled CPU, the inside of the case is very open, neat, and tidy. There are four fans in the computer creating some fan noise, but not too overpowering.

Both the gaming and workstation lines use the ASRock X79 Extreme6 motherboard. It has eight memory slots allowing as much as 64GB of quad channel memory. It is capable of running the 8-Core Xeon CPU and has an easy to use CPU/memory overclocking interface. The board comes with on-board HD audio, USB 2.0, USB 3.0, eSATA, and FireWire 400. The board also has on-board RAID for boosting hard drive performance or ensuring you have a backup of all your data. The only thing missing for data input is a memory card reader.

The computer comes with a SATA Mushkin 240GB SSD although DV Nation currently offers the OCZ RevoDrive which is a faster PCI-E based SSD. The primary data drive is a RAID 0 stripe of two Seagate Momentus XT hybrid drives. The drives are 2.5-inch laptop form factor with 16GB of SSD memory which results in greatly improved performance over standard 2.5-inch drives. To top it off, 40GB of the 64GB of main memory is used as a hard drive which data can be saved on and backed up to the SSD while the computer is not running.

The CPU in our RAMRod Ultimate Workstation is a Core i7 3820 which is overclocked to 4.2GHz from the base 3.6GHz. With the aid of water cooling the computer has great stability and should cause no worry of overheating. RAMRod Ultimate Workstation also offers the faster eight core Xeon, but it comes with a $1,000-$2,000 price depending on the model.

The video card in our configuration is the NVIDIA GTX 690. It is actually two NVIDIA GTX 680s in a single card. The card comes with 4GB of video memory and is a great gaming card. For video editing the video card doesn’t matter too much except with a speed boost using Adobe Media Encoder which is only supported by select NVIDIA Quadro cards. The GTX 690 also supports as many as four video cards with two DVI and a single dual-link DVI. There is also a single Mini DisplayPort.

The Windows Experience Index base score was 7.8 with 7.9 being the highest score. Unlike most systems which have a bottleneck with hard drive speed, that is not an issue with this one. Overall the computer is very well balanced in all areas of performance.

The NVIDIA GTX 690 is not a 3D modeling video card, so no great test results there. DV Nation does offer NVIDIA Quadro video cards which may be worth it if the computer will be used for 3D Modeling. The Quadro can also offer a boost in render times with Adobe Media Encoder.

When dealing with specialized products such as these it is nice to have the support of somebody experienced. Many companies will not support users who overclock or use other specialized programs to boost performance. DV Nation on the other hand promotes this and offers a 1-year warranty. Other companies may offer three year warranties but these can be voided if they find out the product was overclocked. If you want to have a quick and responsive computer, the DV Nation RAMRod PC line offers computers customized for your need starting at $2,200.