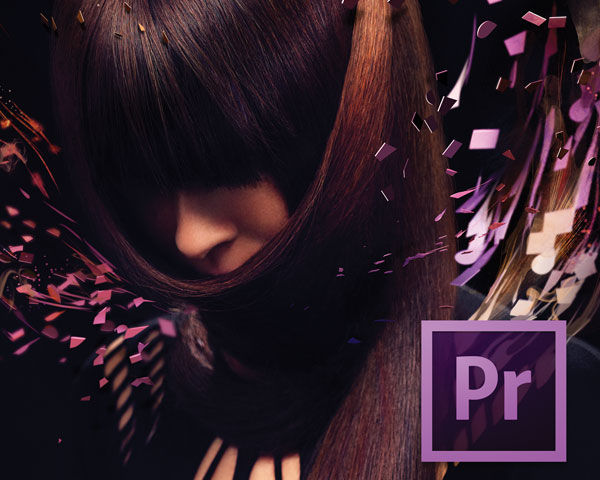 In part two, looking at the new CS6 Production Premium, we will examine After Effects and touch on other programs commonly used in the second half of the production cycle including SpeedGrade, Media Encoder and Encore. We will not spend time reviewing the new pricing and subscription model or shared features that we already discussed, so be sure to check out part one of this review for those details.

Perhaps the biggest new feature in After Effects CS6 is its greatly improved responsiveness. Its Global Performance Cache includes a unique combination of a persistent disk cache, global RAM and graphics handling; you will no longer need to wait for a timeline to re-render all your layers in a preview just because you changed the properties in another layer. After Effects keeps meticulous track of each layer’s rendered previews even so far as allowing you to move them to other compositions. After you’ve closed a project and come back to it later, persistent disk cache locates and loads the frames rendered from your previous session. You’ll see a blue bar on your timeline indicating that After Effects found the rendered preview frames and is waiting for you to load them back into RAM by hitting the space bar or the zero key. Depending on the size of the files and speed of the disk you have assigned to serve as your disk cache, the reloading will be less than real-time but in all our tests it was between 15 and 20 frames per second; far faster than the initial rendering.

CS6 Production Premium makes much more efficient use of the GPU than in past versions. Adobe cites tests done by NVIDIA as performing certain types of tasks, such as playback of higher resolution formats and larger compositions, as being between 1.5 and 2.5 times faster. You can also now render compositions in the background, allowing you to continue working on other parts of your project. Even while background rendering an effect-heavy work area, we did not notice much of a hit to our real-time performance. 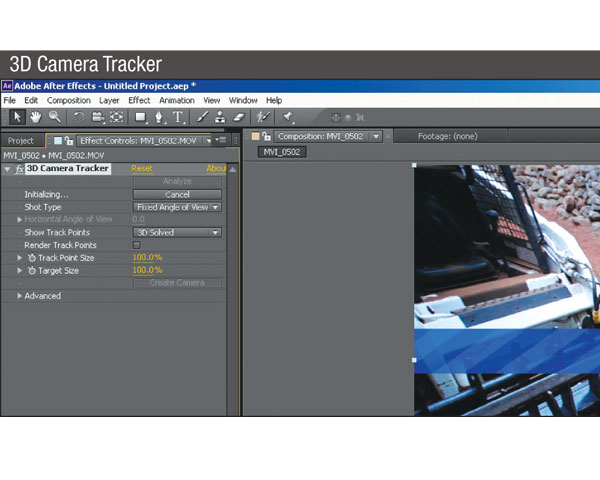 You now have a host of new 3D tools to turn 2D shapes and text into beveled, extruded objects and flat objects into curved surfaces. At the heart of this new capability is the ray-traced 3D rendering engine. For those of you familiar with dedicated 3D programs most of the new tools will be very familiar. If this is your first step into 3D, After Effects makes it painless. Not only can you now quickly give depth to your shapes and text, but you now have sophisticated material controls such as diffusion, transparency, reflection, refraction, specularity, environmental mapping and many more. You can curve any 2D image in 3D space by tweaking the Geometry Options with controls for curvature and the number of segments. The greater the segment count, the smoother the curve up to a practical limit. But be careful when filling the program’s plate, more segments eat up more CPU cycles. By using the ray-traced 3D renderer, you do give up some common 2D functions such as blending modes, layer styles and others, but After Effects will remind you of this with a handy alert when you select the ray-traced 3D render for the first time (and again each session if you choose).

The 3D camera tracker allows you to easily place objects such as text, shapes, nulls or images into 3D space. The key word here is easily. You have been able to do this before but only with a great deal of painstaking effort and even then, with only mixed results. Now you simply have After Effects automatically analyze your 2D footage. This step can take some time depending on the length and complexity of your footage but it does operate as a background process so you can continue to work on other elements. Once this step is complete you have a small constellation of points that, when hovering your pointer over them, give you various perspective plane targets on which you can place and parent your element. We experimented with a variety of footage types and found that the camera tracker gave us good 3D point options and solid tracking results each time.

Creating shapes from Illustrator CS6 vector layers is now a breeze. Just import a vector graphic, create a new composition, select create shapes from vector layer and you have a shape layer ready for animation. If you have a very complex Illustrator file, the calculations can take a while and some types of Illustrator information, such as gradients, may not import accurately. But we found all of our test imports imported and converted quickly and precisely.

There are 90 new or improved effects in After Effects and you now get the complete CycoreFX HD suite with 73 plug-ins all of which now have 16-bit per channel (bpc) support and 35 effects go even further with 32-bpc support. The increased effect bit depth will give you far more options for maintaining nuanced color and brightness values for high quality source material.

There have been several third-party solutions to the dreaded “jello-effect” that plagues DSLR panning shots, but Adobe’s rolling shutter fix works quite well and now comes as part of both After Effects and Adobe Premiere Pro CS6. The After Effects version is identical to the version in Premiere Pro so check out our previous analysis in article #15509. Warp Stabilizer is new since CS5 and does a great job stabilizing shaky footage. It is also a Premiere Pro effect and you can find our take on it in the same article. 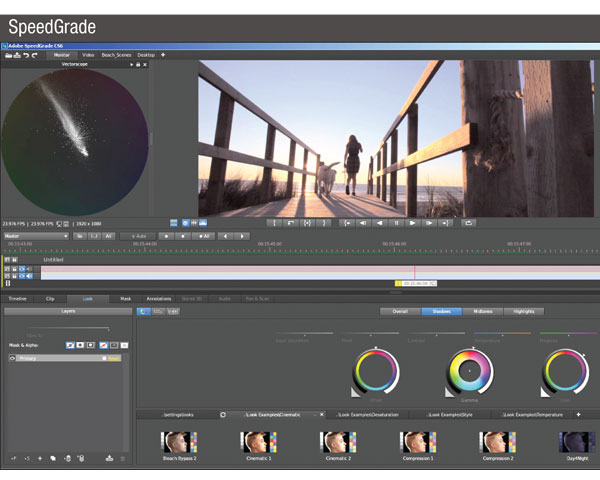 With SpeedGrade CS6, you get a very sophisticated color grading application with dedicated features found in high-end grading suites. Like most other CS6 applications, SpeedGrade is native 64-bit and takes advantage of GPU acceleration and features a 32-bit color processing engine called, Lumetri. This engine lets you work with HDR and RAW footage as well as working in either logarithmic or linear color spaces. If you have the desire, and cash, you can even control SpeedGrade with an external grading surface from a third-party company. The way the new toolset is arranged should be familiar to anyone that has done basic color correction but you really do need to read the manual to get a handle on the many control nuances. And color grading is all about nuance, right?

SpeedGrade works non-destructively saving all color grading, mask and effect changes as a LOOK file so your source material remains unchanged. There are various monitor options including vectorscope, waveform and histogram that update in real-time. You perform color and brightness adjustments to shadows, midtones and highlights using either sliders, numeric input or the more common color wheels. Handy reset buttons for each color wheel gets you back to where you started if you get too crazy. By design, the SpeedGrade color wheels default to very subtle adjustments even if you wildly move your mouse. Holding the shift key lets you make coarser adjustments.

Some of the more powerful features include color grading layers that work very much like adjustment layers. You can apply a color grade to a timeline track and have it adjust multiple clips equally even after having made individual clip adjustments. There are plenty of preset color samples to use as starting points for your own custom look along with filters and effects.

There is much more to this powerful new addition to the Adobe Production Premium suite, so it is worth your time to check out their website for details. Oh, and don’t be in a rush when you first sit down with the program. There’s just too much to explore.

This little gem, also known as AME (Adobe Media Encoder), may not get the attention of its bigger siblings but it can make or break your final output. Adobe has made several noteworthy improvements for CS6. If you regularly output various formats of the same video you’ll be relieved to see the new watch folders that, once set up, let you render to various formats from the same video source. If you don’t want to create a watch folder, you can load and encode multiple presets at the same time. AME has many new presets covering an expanded range of mobile devices and formats. Finding the right preset might be difficult if it were not for the new Presets Browser. This both organizes presets intuitively by type as well as lets you search for the one you want. You also get a much better view of the status of the encoding process which, as before, still runs in the background letting you do other things.

The big news for Encore CS6 is that it is now 64-bit native. This should provide some speed improvements in both processing and loading of assets as well as make the program more stable. This application opened nearly two seconds faster than the CS5 version and was able to load a 3.2GB MPEG-2 file in 34 seconds instead of the 57 it took CS5. During our tests we did not experience one hiccup; not like the somewhat regular cases with CS5. Other improvements include creating chapter playlists when authoring Blu-ray discs and an expanded Web DVD authoring tool set.

After Effects has always been a powerful, feature-rich visual effects tool. But until now, it could frustrate you, making you wait for previews to give you the necessary feedback to make your next decision. That creative barrier is largely removed with CS6 and working in After Effects is more fun and inspiring than ever. SpeedGrade appears to be very powerful, but with this power, comes a bit of a learning curve. We think it will find a following and is worth investing the time to learn if you want to add that extra touch of Hollywood to your productions. And with even the humble Media Encoder getting some polish, the CS6 Production Premium suite is well worth the money.

After Effects and all of CS6 Production Premium’s applications are well worth the upgrade price if you want to get the most out of your edit time.

Read part 1 of this review.