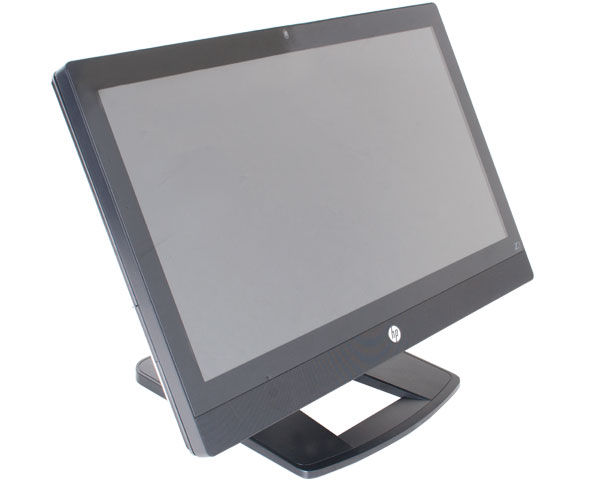 The Z1 is Hewlett-Packard’s focal point of a line of computers that can provide videographers an all-in-one machine for post-production. Playing media is a focus of the Z1, so it quickly shows promise of becoming a central station for work and recreation.

Out of the box, the Z1 is hefty, solid, and big. Glancing at numbers does not force it into your brain that 27 inches is modest for a TV, but this is a workstation we’re dealing with. Of course, we quickly made room on the desk, but felt like we should be pulling up a couch instead and working from six feet away. Rather, we dove into tests by linking it with a second 27-inch monitor, an HP ZR2740w.

Setup is a lot nicer than having to fit a tower on or beneath the desk. The Z1 weighs in at about 47lbs. The base will often try to lift its heels if you move the monitor. The display inputs are located directly behind the HP logo on the front. These ports have been collected into a fairly small space and end up near the joint of the stand and can be a squeeze when plugging in AC, Ethernet, USB and the ZR2740w’s DisplayPort. As for grabbing media from your camera, find the right side of the Z1 which houses an SD-sized slot above a 6-pin FireWire jack. Below these are two SuperSpeed USB 3.0 jacks and two 1/8-inch jacks for microphone and headphones. 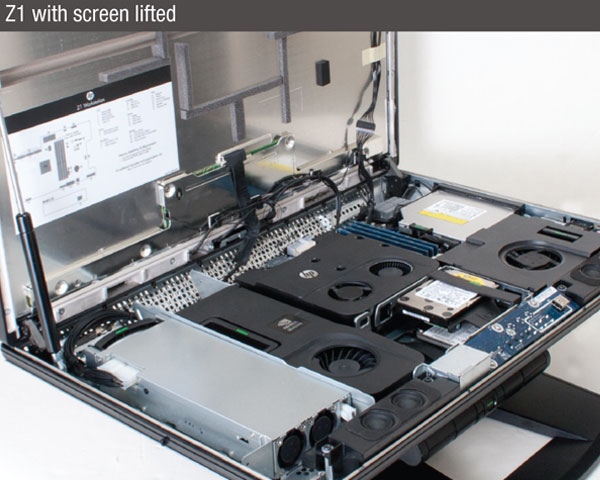 The Z1 monitor tilts back to become completely horizontal, now with the bottom facing you, release the display just like you would a laptop battery using two latches that must be slid outwards before lifting the screen like a car hood. The best part is, beneath this computer’s hood is a neatly laid-out array of fans, circuitry, plastic and metal. If you can find the dipstick on a car, you’ll have little trouble finding the green tabs that indicate a release for a given component. As with many electronics – don’t force it. With this simple concept we were able to change out an SSD and safely handle many major components. Part swapping is truly fun and easy with the Z1 – it shows that the design caters to upgradability.

The tightly constructed Z1 initially squeezed discs so tight that removing DVDs was difficult. HP solved the issue before final models were released by increasing the opening and changing internal geometries. While all these parts are working, the Z1 maintains its cool by expelling most of its generated heat through vents at the top of the rear.

Editing is smooth and fast. In fact, it never felt like we had to wait with our review unit, though editing performance will vary on which video card you’ve chosen to aid the CPU. With a test clip imported, the Z1 rendered transitions quickly and made them easy to view. Video playback of local files and streaming video was very clean with no jumps. Actually, the only bottle neck for which we had to wait, was while transferring files from a networked storage drive.

Audio from the Z1 is crisp, full and easy to manipulate. HP provides a set of silver-colored buttons on the keyboard and that’s as convenient as it gets. The rest of the machine wears black in matte for the keys and bulk surfaces and glossy for the mouse and borders of the equipment.

It’s worth mentioning that there is little fuss between the Z1 and added devices, whether it be a monitor, smartphone, or USB. We would have liked to test some of our beefy storage devices with it, but no Thunderbolt or eSATA ports were to be found. We understand the compromise for space, but these technologies are essential for some video producers and perhaps one aspect in which HP was unable to cater to videographers.

Generally, video editing bays are dark rooms, and you’ll want to make the environment for the Z1 that way since the reflective glass adds some strain to the editing process. Of course, a second monitor is always welcome, so we really felt that getting a ZR2740w was a blessing.

The size of the Z1’s display really hits home since the more workspace you have, the easier it is to stay organized. Being organized is one of the things that keeps us efficient and helps us stay sane.

The HP ZR2740w is definitely a bonus, there’s no glare on the screen, it has automatic sensing of new inputs and offers the physicality of a tablet – as in, it rotates. The applications of a portait-oriented monitor may not pertain to video much, but photo editing and working with graphic heavy projects for magazines or newspapers might be a lot more fun. As a monitor, it simply must display information, and aside from power, the three buttons are dedicated to cycling sources, adjusting brightness up and adjusting brightness down. There is no menu but also no graphic, so it is impossible to make adjustments that aren’t subjective.

Our Z1 came with CyberLink YouCam, an HD webcam! The ability to take a video of your computer is really handy. The webcam itself is nicely tucked away above the screen, with a tiny light to indicate function and recording.

Troubleshooting is clear. After one instance of swapping parts within the Z1, the video card wasn’t seated correctly. So, the computer did not turn on again, but the power button blinked red six times. We then found the maintenance and service guide after a quick search of “Power LED” got directly to the problem. Combine this information with open eyes and observation of the machine and any hang up should be easily identified.

The Z1 is a solid workstation that can get the job done. You get to pretend that you’re Tony Stark when switching hardware, and feel like a kid with a full entertainment system when carrying the 27-inch screen from place to place. Your workflow can definitely benefit from HP’s Z1, and for a first in a new line of workstations, it’ll take a lot to top the number one.

The Z1 is a solid workstation that is a joy to use, and a few features away from being ideal.