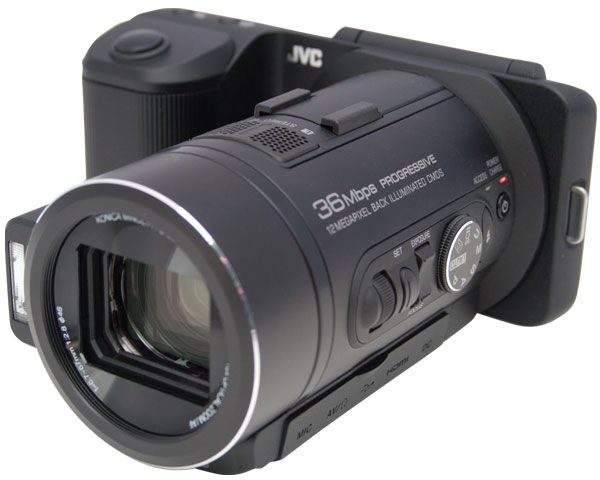 For some time now, the lines have been steadily blurring between traditional camcorders and still cameras. Over time, the quality of each has improved, but each camera was designed primarily for one function while also having the ability to do the other. Somewhere ahead, however, lay the promise of the true all-in-one camera, designed for both video and still photography, and excelling at each.

Is such a goal even possible? The people at JVC certainly think so. They have recently released the GC-PX10 as a “true hybrid… redesigned to provide satisfaction no matter what you choose to record.” Are they right or is the GC-PX10 just another camera that also shoots video? 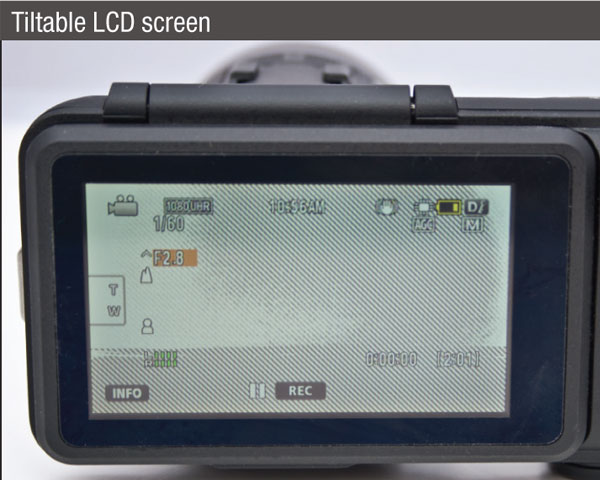 The GC-PX10 has a rather unique appearance in that it looks as though a large lens has been jammed onto the front of a very slim still camera next to an oversized battery compartment/hand-grip. The hand-grip fits naturally in the right hand and is comfortable to hold for short periods. Gripping with the left hand for proper steadying of the camera however is a bit awkward. The lower left corner of the camera extends uncomfortably into the palm of the left hand with the thumb resting directly on top of the accessory shoe. Reversing the grip, with the thumb below and the fingers on top is more comfortable but then the fingers cover up both the accessory shoe and the microphone.

Switch the camera on and the automatic lens cover snaps open, allowing light to enter the 1/2.3″ 12 megapixel back-illuminated CMOS sensor. The Konica Minolta HD lens features 10x optical zoom with Optical Image Stabilization. A port cover lies along the bottom left side of the lens barrel hiding an external microphone jack, AV/Headphone, USB and HDMI ports, and a connector for the included power adapter/charger. Above these are a set of three controls for selecting and adjusting exposure and focus. To the right is the recording dial for selecting the various recording modes followed by the still photo flash button, the power button and a pair of status lights.

On top of the lens barrel is the microphone and accessory shoe with built-in speaker and an SD card slot on the right side. The SD card slot may see little use however due to the sizeable 32GB internal memory. At the rear of the camera is a tiltable, 3.0″ touch panel LCD screen. The display does not flip out to the side but rather tilts straight up. This is handy for recording low angle shots or for shooting self-portraits. Buttons for switching between record and playback modes lie alongside the screen, toggling between video and still image modes and pulling up the mode specific menus. Menu navigation is fairly intuitive and is accomplished by touch. The video record button and a rocker switch also occupy the back end with the rocker pulling extra duty on zoom, volume and recorded clip navigation.

Topside are the continuous shooting, high-speed recording and snapshot buttons. The battery compartment is at the right front of the camera, beside the lens. Battery access is tricky and takes a bit of practice. The process seems simple enough – slide a locking lever in one direction while sliding the compartment cover 90 degrees to it. In practice, you may find yourself pushing in opposing directions and having great difficulty. Follow the directions in the user’s guide exactly, using a slide and lift motion, and you’ll get it. Don’t wait until a crucial moment to swap batteries however; practice beforehand.

Set the mode dial to Intelligent AUTO and the GC-PX10 will continually analyze and adjust to deliver truly excellent results or take full control by switching to manual. Take crisp, beautiful, 12 megapixel still photos even in low light with adjustable ISO values up to 6400. You can also take 8.3 megapixel stills while recording full 1080/60p HD video without having to switch into still mode. One very cool feature allows you to capture high-speed stills. Grab those fast action shots at 60fps for up to 130 shots – that’s 120 shots in two seconds! Speaking of cool features you can also record video at 300fps and play it back in super slow motion – great for breaking down that new choreography you just captured – or use time-lapse recording when you want to speed things up a bit.

While not likely the final step in hybrid evolution the GC-PX10 certainly is a great next step in the right direction and the best effort we’ve seen in 2011. It will be interesting to see what new steps will be taken in 2012, don’t you think?

Terminals: mini HDMI Out ; AV Out; USB2.0; Mic In (Plug-in power); Headphone Out

If you’re looking for one camera that shoots it all, including high-speed video and stills, then be sure to check out JVC’s GC-PX10 hybrid.