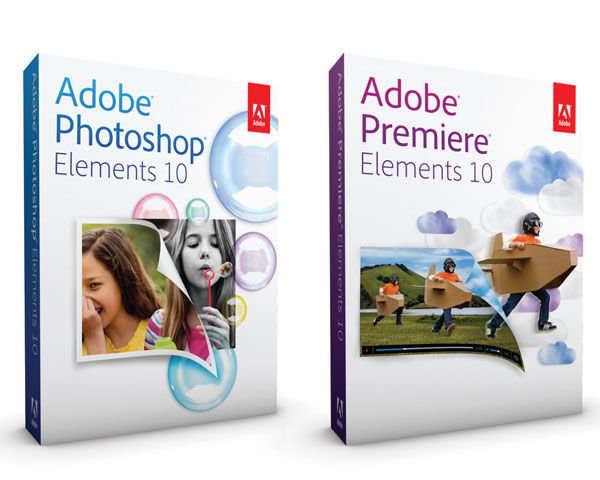 Ten years – Think of the advances in personal computers and digital video in that time. And now Adobe has released the tenth annual versions of its best-selling consumer Adobe Elements product line, Premiere Elements 10 and Photoshop Elements 10. This latest edition continues Adobe’s focus on providing deep technical power to create impressive results, but packaged behind a friendly interface and extensive automated assists.

The Elements applications are not for the casual user. They are designed for photo and video enthusiasts interested in investing effort to organize and manage their media. The promise with this investment is the pay off through the automated assists to help manage those files and over time as you learn to the depth of these applications.

Video and Photos Together

The key new focus in Elements 10 is the end of the distinction between photography and videography. Consumers don’t want to carry multiple separate devices – or worry about lugging around both a still camera and a video camcorder. Instead, they shoot both photos and video with the same capture device, whether a digital camera with video mode, a camcorder with photo mode, or simply on their smartphone.

Similarly, today’s media productions also blur these lines, as a photo editor needs to combine a collection of photos into an animated photo montage or slide show, and a video editor needs to incorporate still photos for titles, backgrounds, and overlay elements. Conveniently, this leads to the conclusion that you really need both kinds of tools, such as a bundle with both Premiere and Photoshop Elements.

This integration of photos and video is also combined with Adobe’s emphasis on dealing with a collection of media as a separate issue from editing. Both Premiere Elements and Photoshop Elements include a separate common Organizer tool, used to import media files from various devices and then organize and tag them. You can also apply basic photo fixes and create photo albums, and share photos and videos directly online. Then you can launch the individual applications for more extensive photo or video editing.

The Organizer integrates with Adobe’s online services, offering automatic online backup, synchronization of your media collection between multiple computers running the Elements Organizer, and Web access from computers and iOS or Android mobile devices using the Photoshop Express companion app. The Elements Plus upgrade increases the online storage from 2 to 20GB, and provides access to additional libraries of how-tos, movie themes, and video effects.

In Elements 10, the Organizer is now fully integrated between Premiere and Photoshop Elements, and fully functional on both Windows and the Mac. You can also use it to immediately share clips online, on YouTube, Photoshop.com, and now also on Facebook.

When you import new media, the Organizer does extensive processing of both photos and video clips, so this is not a tool for quick in-and-out editing. Instead, the Auto-Analyzer performs intelligent content analysis to find the most interesting and highest quality imagery, and uses that information to automatically set a variety of Smart Tags for each piece of media.

Elements also performs People Recognition to automatically identify and tag people in photos, even across time from children to adults. If you’re sharing photos on Facebook, the People Recognition now can automatically tag faces in photos based on the information from your Facebook Friends list. And photos shared on Facebook can be tagged based on the information in the Organizer.

This processing, augmented by your own tags, then helps you to better organize your photos and footage, as well as assisting the Elements tools to provide automated editing assistance. To find interesting photos, Elements 10 adds new visual searching options beyond text and tags. visual similarity search, now on the Mac, finds photos with a similar general look, balanced between color and shapes. The new Object Search then finds specific objects that you select from within a photo. And the new duplicate photo search finds duplicate or similar photos that you can clean up or group, to better organize your collection.

Once you have your media files imported and under control, you can launch into Premiere Elements to work on your video production with a traditional-style storyboard or timeline-editing interface. Use the project tab to import and assemble the media files for your production, and the edit tab to enhance with effects, transitions, titles, and clip art, or to apply professionally-designed themes.

Then use the disc menu tab to create menus for Blu-ray and DVD discs, and the share tab to export to files, discs, DV tape, mobile devices, online, or as an online Web DVD. Premiere Elements 10 now supports exporting in high-quality AVCHD format, as well as burning hi-def movies to standard DVDs as AVCHD discs with menus, that you can then play back on Blu-ray players.

It also adds a pan and zoom tool to create customized pan and zoom motions across photos, automatically moving to the faces found in the earlier tagging. And it includes additional movie themes and Online Album templates, and adds SmartSound on the Mac to add musical soundtracks that automatically adjust to match the movie length.

As a bonus, Premiere Elements 10 now comes in both a 32-bit and 64-bit version for Windows, opening up more memory and better performance for more complex productions.

Adobe Premiere Elements 10 and Photoshop Elements 10 are a welcome next step in the decade-long progression of the Elements line. These tools walk a delicate line between leveraging powerful technology and still proving a consumer-friendly interface with how-to and Guided Edit support.

In particular, there’s a lot of indexing and processing going on, especially when you first import collections of media files, which can get in the way of trying to do some simple job quickly. But this investment then pays off as you (and the automated processing) can leverage the media information to a better job of finding your media and enhancing your productions.

Beyond the new photo capabilities in the Organizer, other enhancements in Photoshop Elements 10 include curving test that flows along paths and around objects, 30 new smart brush effects including Snow, Pencil Sketch, and Oil Pastel, and additional Guided Edits to provide step-by-step assistance for sophisticated activities including highlighting the subject with simulated depth of field, adding a diffuse glow to create a dreamlike Orton effect, and breaking a photo up into a collage of snapshot pieces. There are also nice refinements including crop line grid lines using Rule of Thirds or Golden Ratio for better composition, and saving photo creations (such as photo books) as individual JPEG or PDF pages for more convenient printing and sharing.

Adobe Elements does media synchronization and sharing between computers running the Elements applications, online, and mobile devices. But Adobe has recently announced a separate product, Adobe Carousel, focused solely on keeping your entire photo library consistent across computers and mobile devices.
Adobe Carousel client apps are available for Mac OS computers and on the iPad, iPhone, and iPod touch (with versions for Windows and Android expected in the first half of 2012). Your entire photo collection then is accessible on any supported device through the Internet cloud – When you import new photos on the desktop, or take photos on your mobile device, or make edits, deletions or additions, any changes on one device are automatically updated across all devices linked with the account.