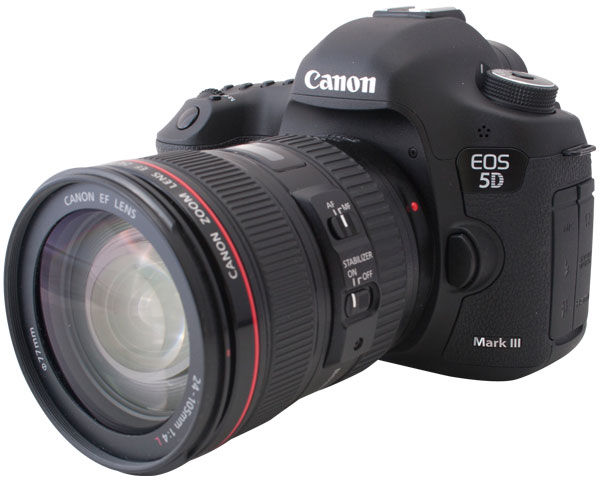 In 2008 Canon made history with the EOS 5D Mark II Digital Camera. Before that, the ability to shoot video with a camera containing a full frame 35mm sensor was beyond reach for the average video enthusiast. The 5D Mark II made it so anyone with a few thousand dollars could produce images that looked like he or she could rival the masters in Hollywood. Now, four years later, Canon has given us the 5D Mark II's successor, the 5D Mark III. How does it stack up to the camera that started a revolution in digital filmmaking? We spent a couple weeks with the new camera to find out. 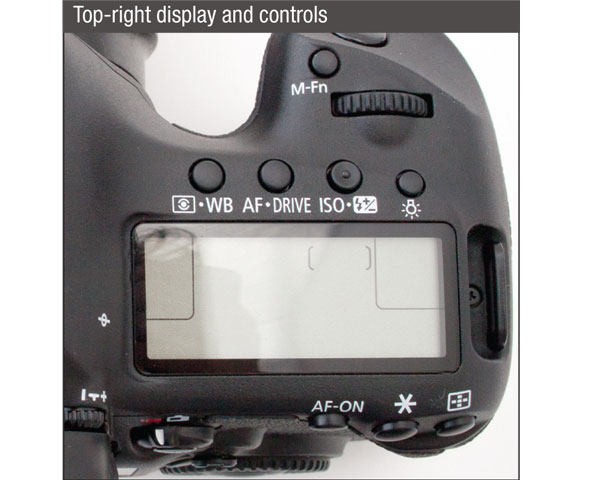 The first thing you'll notice about the 5D Mark III is that the camera is relatively heavy for a Digital Single-Lens Reflex (DSLR). If you've spent much time with its predecessor, the feel will be very familiar, although some buttons have been added or moved. The grip is big enough to feel stable, even in large hands. Even though the camera is heavy, you never feel like it can slip out of your hands, although for safety we definitely recommend proper use of the strap.

Most of the controls you'll need are well-placed near your right thumb and index finger. Aperture, shutter speed, ISO and even white balance controls are easily accessible without having to dive into menus. If you need it, the depth of field preview button has been moved to the opposite side of the lens as the lens release button, which means you can conveniently press it with your right ring finger while aiming down the optical viewfinder.

Focusing during a shoot works well if you've got a steady hand or a follow focus. While the autofocus works amazingly for still photos, we'd recommend avoiding it mid-shot for video, as it is pretty slow when used in live-view mode. You can adjust the exposure and audio gain while recording, and the addition of touch-sensitive control means making such adjustments is a silent and shake-free operation.

The 5D Mark III's LCD screen is slightly larger than the 5D Mark II and is a bit higher resolution. It looks great but the bump up in pixels isn't enough to be a major selling point. We find that using the non-articulating LCD screens on most DSLRs is difficult, and the 5D Mark III is no exception. While many video enthusiasts shift entirely to DSLR shooting, adjustable LCD viewfinders are still one area where traditional camcorders dominate. Fortunately, like its predecessor, the 5D Mark III works well with external monitors via an Mini HDMI port. 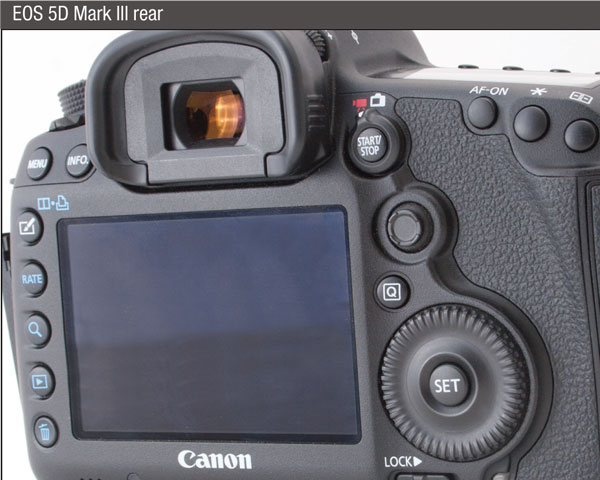 We used a Zacuto Z-Finder EVF, a RØDE VideoMic Pro, and a SanDisk 128GB Extreme Pro CompactFlash card when the camera was tested for a video shoot. Canon sent the 5D Mark III to us with the kit's 24-105mm f/4 IS lens, but we used a Canon 50mm f/1.2 lens as well.

One important selling point to the 5D Mark III is the full frame 35mm sensor. If you've never shot full frame before, you're in for a treat. The most obvious benefit of shooting full frame is being able to take advantage of the full field of view of your lenses. Crop factors on smaller sensors mean your cameras get a narrower field of view. This makes using popular 50mm or 70mm lenses difficult as you have to back away from your subject to get the same composition as a full frame camera with the same lens; indeed, this isn't a problem with the 5D Mark III. Being able to get closer to your subject also means you will be able to get shallower depth of field. This blessing, however, can be a curse to beginning DSLR shooters. When using the 50mm f/1.2 on the camera, and opening 50mm or 70mm up the aperture as wide as it would go makes keeping the focus on closeup shots quite difficult. That's simply the nature of photography, and it will take some getting used to.

To monitor your exposure, the 5D Mark III offers an on-screen, live histogram with the red, green and blue channels displayed separately, and this is an amazing feature. Not only does it give you an at-a-glance view of your overall exposure, but the ability to see each channel independently gives you the ability to verify your white balance, in case you don't trust the color of the LCD. It would have been nice to also have zebra stripes included as an option but that's a matter of preference. The RGB histograms will work well for those who choose to use them. For those that don't, there are always external field monitors that handle zebras.

The level of noise, even at high ISO was impressive, and we found that shooting video at ISO levels up to 6400 still yielded usable footage. The 5D Mark III will go all the way up to 12800 in video mode. Shoot at a high ISO and you can expect to get some noisy video but it might be acceptable for the right project. Canon really should be commended for its commitment to picture clarity, as they've been smart to keep the megapixel count under control. Higher megapixel count means higher pixel density, which ultimately leads to noisy images. Often camera manufacturers try to use very high megapixel counts as a selling point over their competitors; however, Canon knows we're smarter than that and opted for a more modest pixel count (22.3 MP) in order to maintain a cleaner overall image. In fact, the low light performance on the 5D Mark III is some of the best we've seen in a DSLR.

Rolling shutter is often cited as a major concern for shooters resistant to hopping on board the DSLR video bandwagon. Well, you'll be happy to know that Canon has improved rolling shutter issues. Unfortunately the visual side effects of rolling shutter are still present, but they're much more manageable than ever before. Unless you're shooting very high speed camera moves or shaky-cam action sequences, you shouldn't have much of a problem at all.

One big drawback to the 5D Mark III is the lack of an uncompressed signal from the Mini HDMI port. Increasingly we're seeing cameras offer 4:2:2 video output from either HDMI or SDI, and we wish Canon would have included it. Anyone doing green screen work would really be able to take advantage of that additional color information should they decide to record on an external device.

On the other hand, Canon has increased the record duration of the camera, which is a great feature. The maximum file size for a video clip on the 5D Mark III is still 4GB, just as it was on the Mark II. The 5D Mark III, however, can shoot as much as 30 minutes (actually 29:59), even though the clip size still can't exceed 4GB. It does this by seamlessly creating several 4GB clips (about 12 minutes), which can be stitched together in post-production. That means that shooting weddings and events with a 5D Mark III is much more possible than it's ever been. To help store that much data, Canon has added an SD card slot, so now if your CompactFlash card fills up, the Mark III will start using the SD card. 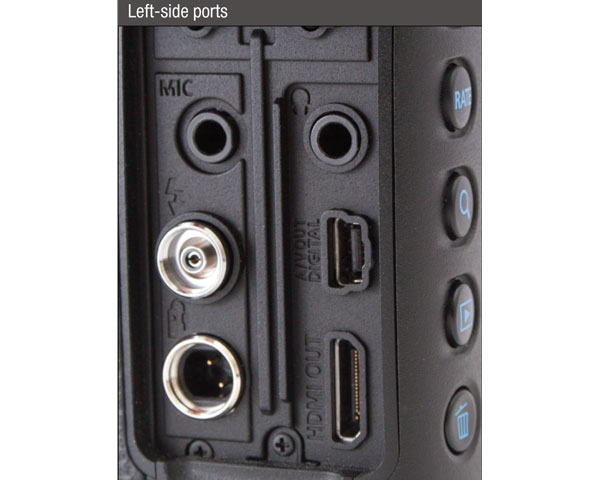 Perhaps the best reason to shoot with the 5D Mark III is the addition of gain control for external microphones. This is a big plus, as those who choose to use it won't have to buy an external audio recorder or a field mixer that counteracts automatic gain. Recording sound straight to the card is finally here and it works quite well.

To help monitor your sound, the 5D Mark III includes an on-screen color VU meter so you can watch for peaking. Similar to exposure control, you can manually adjust the audio gain while recording. Inside the camera's settings menu is an option to enable touch sensitive control, which is a must for click-free adjustments.

The last great audio feature is the addition of a headphone jack, so that you can listen to your sound as it's being recorded. Even with the VU meter, being able to monitor what's being recorded is necessary for video production. We need to be able to listen for stray sound or distortion, and we're finally able to do so.

Apparently this puppy also takes pretty good pictures. Joking aside, this is one of the great benefits of shooting video primarily on a DSLR. Videomaker readers will likely purchase this camera to shoot stunning video, but you'll also get a world class still camera as well. The Mark III really shines in low light and photographers who are used to shooting with the Mark II will see a drastic noise reduction at very high ISO settings (6400+). With the ability to shoot three different types of RAW files, getting a clean and well exposed image should never be a problem.

If you're already shooting on a DSLR with less than ideal audio, the 5D Mark III is giving you a great reason to upgrade. Additionally, the ability to shoot for 30 minutes is a welcome upgrade. Uncompressed video output via HDMI is really all that's left that we could have asked for from the 5D Mark III, and we're hoping that Canon will give it to us in a future firmware update. Until then, the Mark III is still a safe purchase for veteran DSLR shooters. For those of you who have been waiting on the sidelines, it's time to put your reservations to rest and take a good hard look at shooting video with a still camera.

Superb imaging and fleshed out audio control makes the 5D Mark III a worthy successor to the camera that forever changed the landscape of video production.