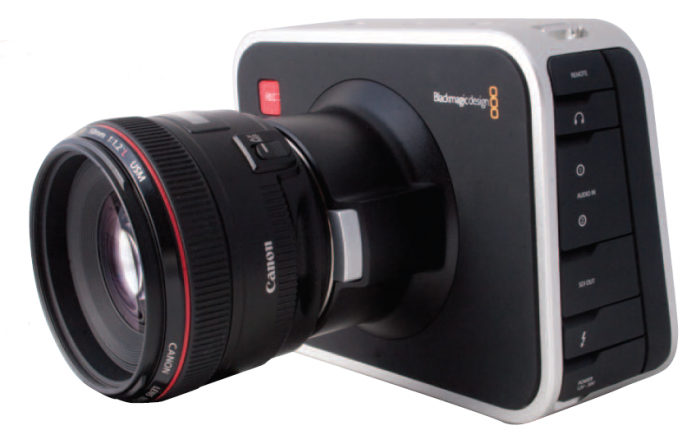 The Blackmagic Cinema Camera is poised to launch another revolution for the budget-minded video producer. DSLRs led the last revolution with their low-cost production of cinematic video but they lacked many important features like the broad dynamic range and color depth of expensive film and digital cinema cameras.

The Blackmagic Cinema Camera shoots in uncompressed 12-bit CinemaDNG RAW as well as ProRes and DNxHD and features up to 13-stops of dynamic range. You can capture a great amount of detail in the shadows and highlights with more color information than from cameras that only record 8-bit compressed files. The results are gorgeous images that stand up very well to heavy post-processes like chromakey and color grading, an area where DSLRs fall flat with color banding and compression artifacts.
The EF version, that accepts Canon and Zeiss ZE mounts, was announced at last year's NAB and with Blackmagic Design promising such a remarkable camera, many thousands of pre-orders have filled waiting lists around the globe. A passive Micro Four Thirds mount is also scheduled for production but as of publication, has not begun to ship. 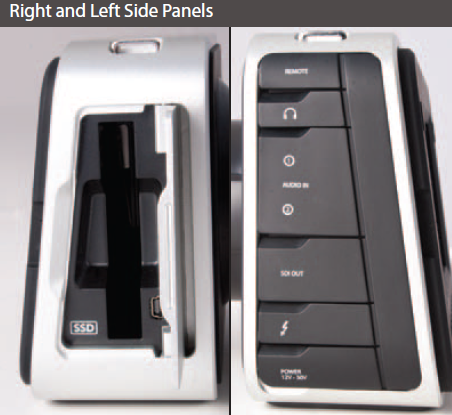 The Blackmagic Cinema Camera is a well engineered camera. The housing is solid aluminum, and while it may look similar to an overgrown DSLR it will exceed four pounds with even a small wide angle lens. At 3.75lb. it is a good pound heavier than its closest DSLRs which makes it a little awkward to hold for long. While holding the Blackmagic Cinema Camera, your thumbs naturally hover over two often-used buttons: Iris and Focus Peaking. We did find it more difficult to reach those same buttons with the sun hood installed. You can easily operate the remaining buttons for recording, transport, menu and power at the bottom of the 5-inch LCD touch screen. For shooting handheld, there is one large red Rec button on the front.
A dense rubber material covers the front, back and one side that makes for a sure grip but it does get dirty with normal field use. The lens mount on the EF model we reviewed extends forward a bit but securely holds even long lenses. On the top there are lens strap connections and three threaded holes for mounting accessories or integrating into. A large spring-loaded door on the right side covers the SSD bay and a USB 2.0 Mini-B port. Most of the connections are on the left side and are covered by rubber flaps that work quite well. (See the technical specifications for a detailed listing of these connections.) There is the standard ¼-inch mount on the bottom along with a fan vent.
Blackmagic Design also includes the full version of its color grading software, DaVinci Resolve, itself costing $995 if purchased separately, and UltraScope and Media Express direct capture software are also included in the package.
[video:788]

Shooting in the RAW


We took the Blackmagic Cinema Camera into various shooting environments to test its crop factor, dynamic range, resolving power, aliasing, moirÃ©, color reproduction, low light, rolling shutter and audio. But first, we had to get acquainted with the menu. 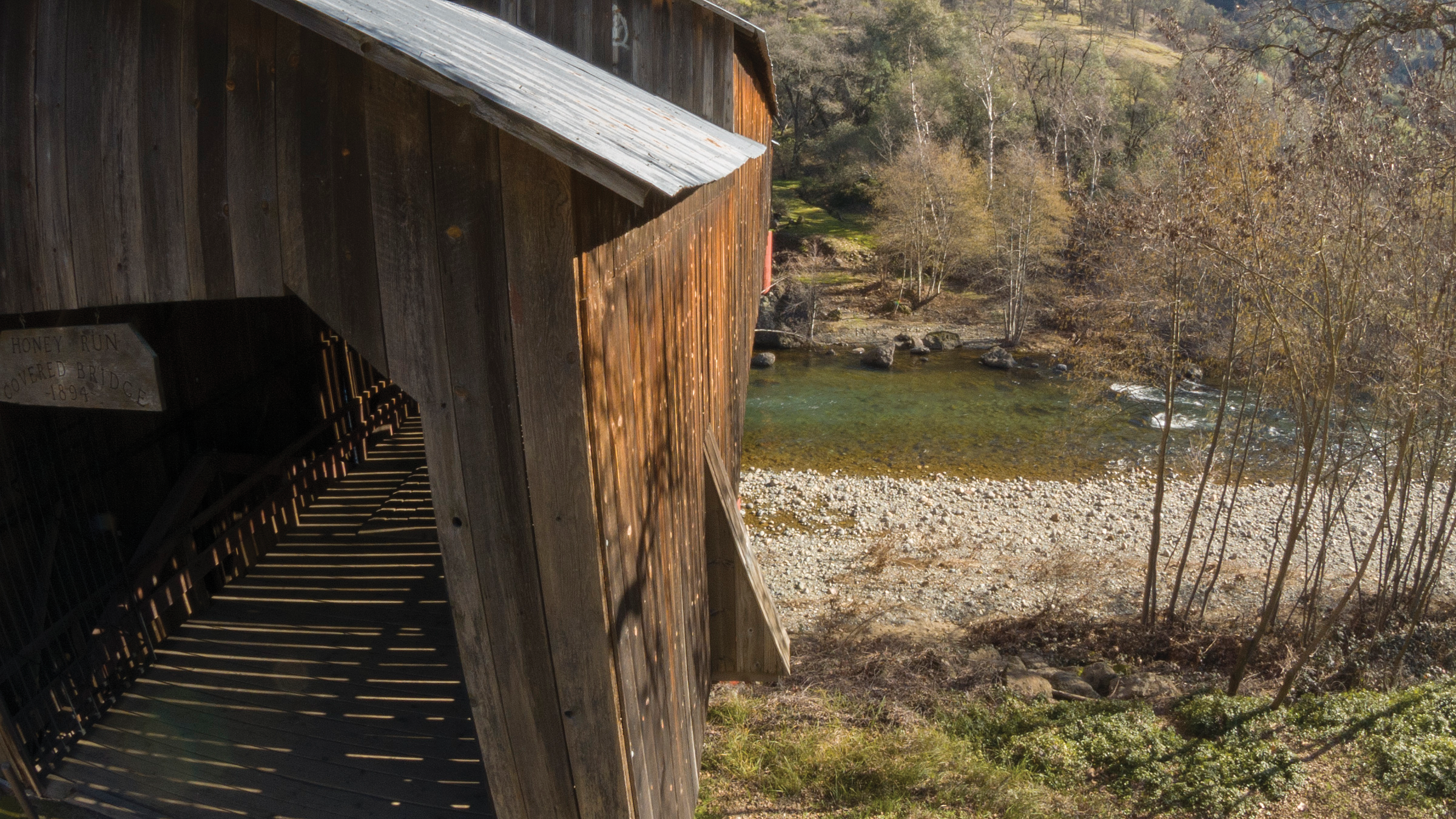 Most of the Blackmagic Cinema Camera's functions are accessed through the touch screen display. The number of functions are sparse but nothing critical is missing. The touchscreen is responsive and we were able to enter some basic metadata, change the ISO and select our recording and display preferences in a matter of a few minutes.
Because the sensor is less than full-frame, it uses only part of the image circle projected by EF-mount lenses resulting in a crop factor of 2.4. So our Canon EF 50mm f/1.2L lens effectively became a 120mm lens. For our wide angles we relied on our Canon EF 8-15mm f/4L for a full-frame equivalent of 19-36mm. This crop factor does mean that even moderate telephoto lenses will get you very close. The popular Canon EF 70-200mm f/2.8L may now zoom you to 480mm. The Blackmagic Cinema Camera is designed to control the electronic iris of EF and ZE mount lenses but as of firmware version 1.2, there remain several popular lenses that are not communicating with the camera. Check the Blackmagic Cinema Camera forum on Blackmagic Design's website for the latest list of compatible lenses. 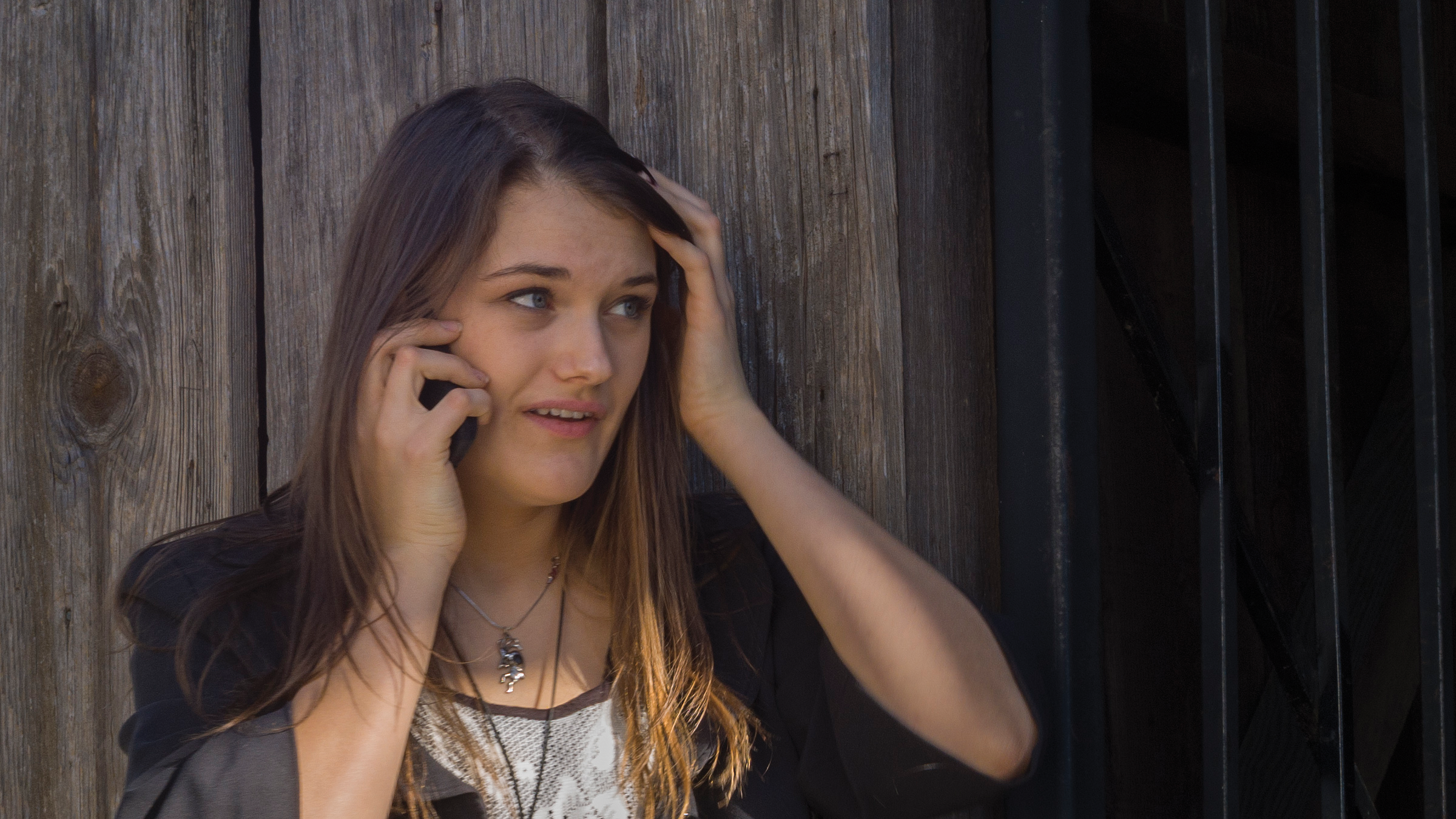 We used a very challenging location to test the Blackmagic Cinema Camera's dynamic range: a nearby 19th century covered bridge at midday. (See our sample footage online at www.videomaker.com/article/15514.) Thin shafts of light cut through the hundreds of large cracks in the wood walls laying harsh lines of light and shadow in the otherwise unlit bridge interior (Figure 1). We had the Blackmagic Cinema Camera at the bridge entrance on a 21-foot jib sweeping down from the bright rooftop tracking our talent running from the shadowed interior to the bridge's entrance that was just beginning to get direct sunlight; a nightmare lighting scenario for any DSLR. We shot in RAW mode and with minimal post processing had images that could see detail in the darkest sections of the bridge interior while still not overexposing our model's fair skin even when she popped into the direct sunlight (Figure 2).
We shot exposure charts in shade and full sun to confirm what was obvious from this test – in RAW mode the Blackmagic Cinema Camera has more dynamic range than any DSLR. Is it a full 13-stops of usable dynamic range? Yes. 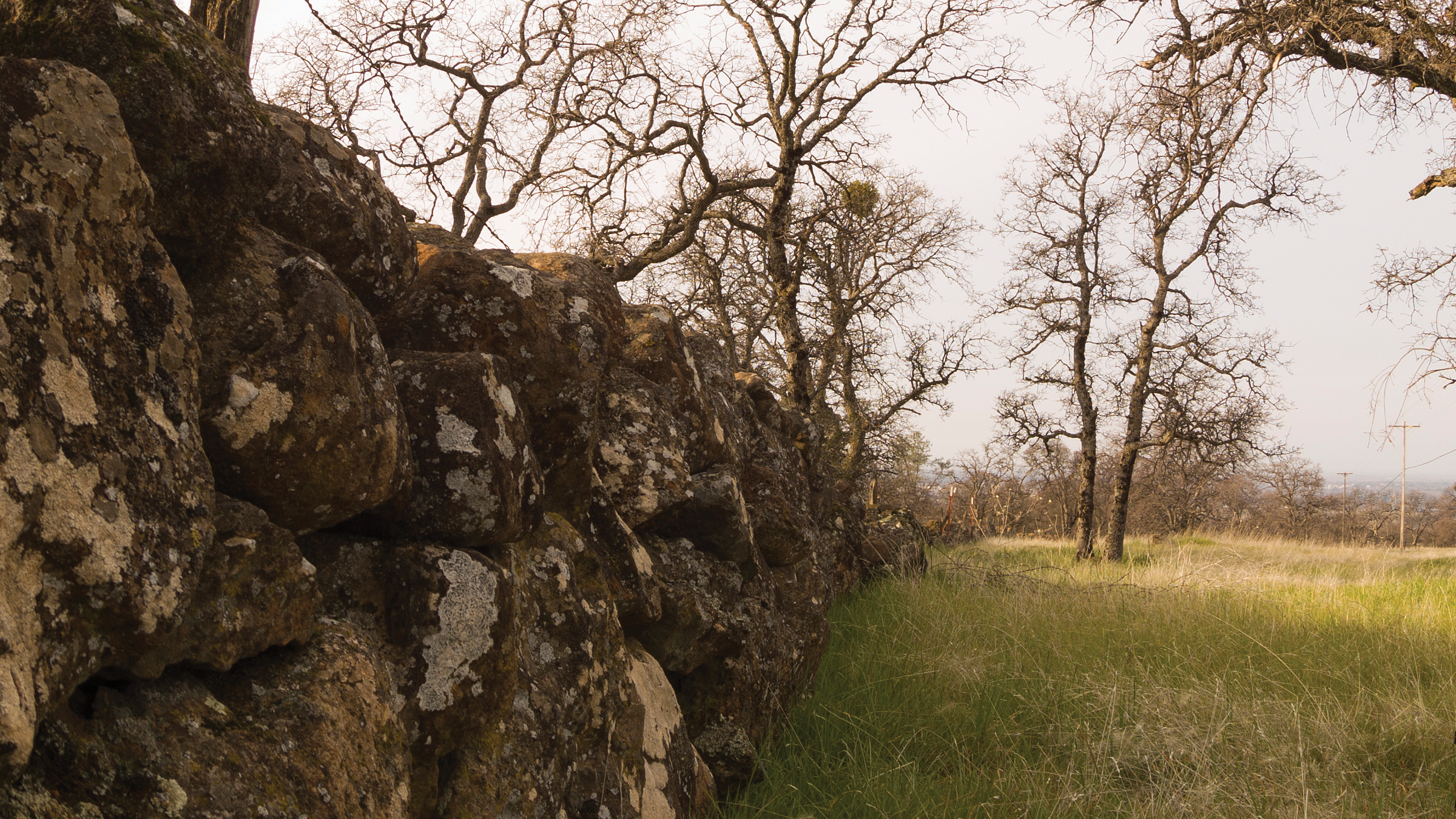 We shot a variety of indoor and outdoor subjects with fine detail to see how far we could push the resolving power of the 2.5k sensor. At full resolution the images we recorded showed remarkable detail in fine grasses and wood textures (Figure 3). Keep in mind that moving up to cinematic quality may also include getting a higher resolution monitor. To see the unscaled image we had to pan on our 1080p monitor.
In the studio, we set up a group of colorful fabrics with high contrast tight weaves to test for moirÃ© and a guitar with detailed high contrast lines to check aliasing (Figure 4). The fabrics had very little moirÃ© when panning and the just-off-horizontal strings of the guitar showed very slight aliasing but both issues were not as pronounced as DSLR files. Determining accurate color is a bit trickier when shooting RAW, as you must do some post processing, so we did the minimum. We brought the file into DaVinci Resolve and simply applied the standard BMCC REC709 LUT. The result was a perfectly exposed, saturated and color-correct image. 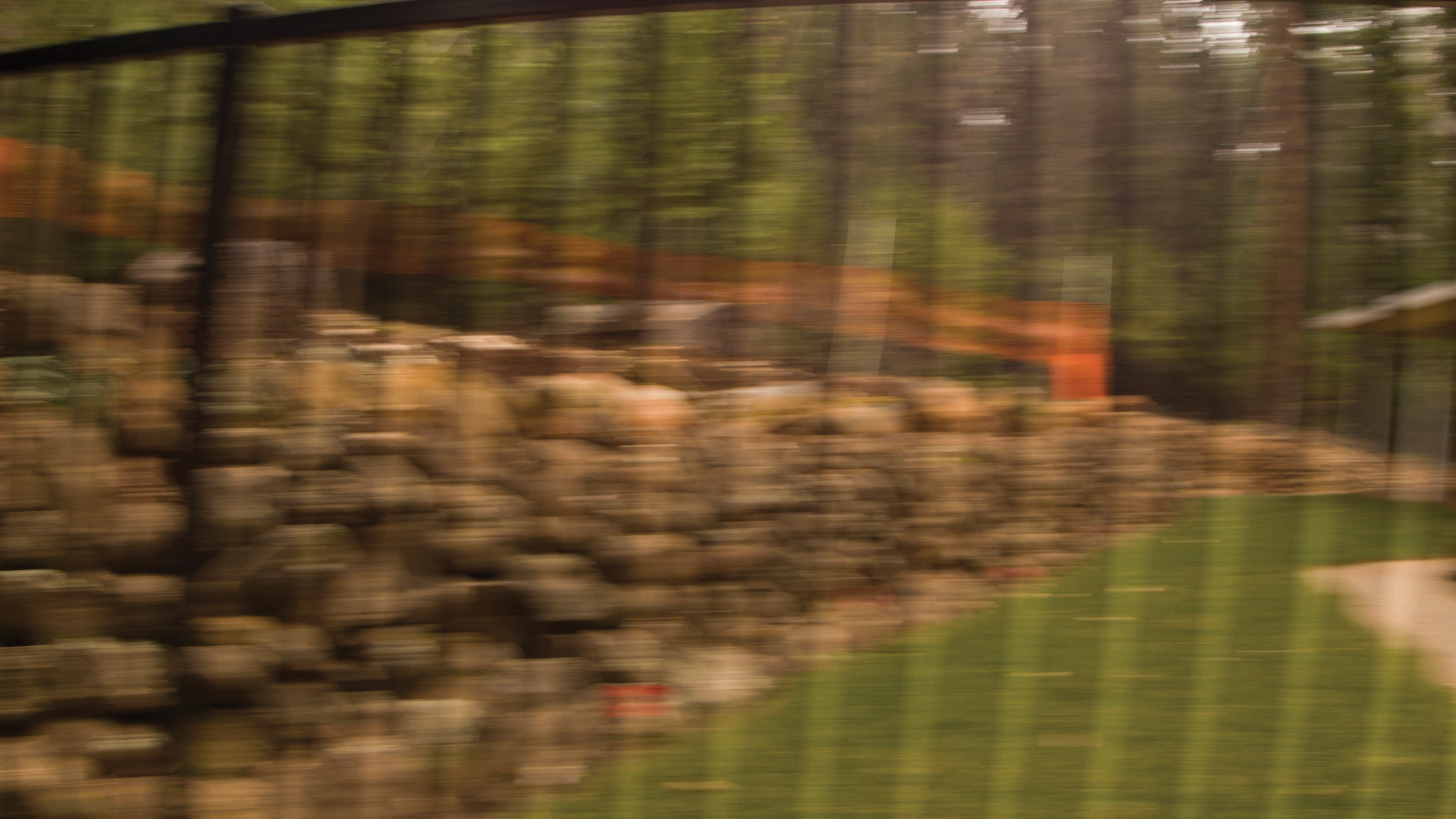 To test low light sensitivity we shot an outdoor scene illuminated by a 100-Watt light and shot at 1600 ISO. After adjusting in DaVinci Resolve we expected to see little detail amid muddy blacks. We did not see much detail beyond 30-feet from the light source, but we were surprised that even the quality of the noise had a more pleasing look than our DSLR footage.
For rolling shutter, we shot a vertical wrought iron fence, panning at increasingly fast speeds. The resulting "jello-effect" is similar to that of most CMOS-equipped DSLRs (Figure 5). 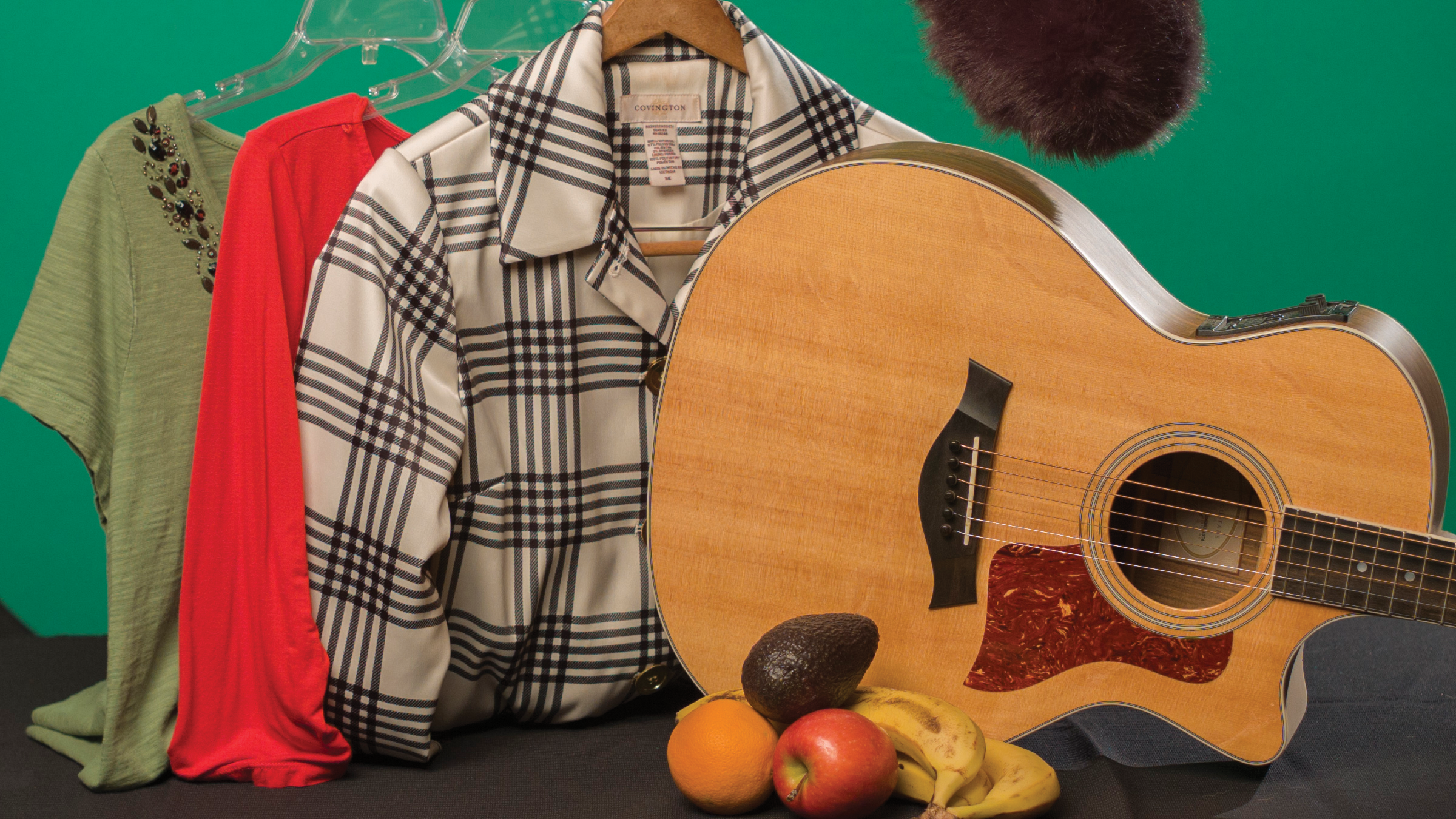 The Blackmagic Cinema Camera records audio into ¼-inch balanced inputs. We connected two lavalier mics and adjusted the gain settings. There was very little noise in the files but dedicated audio recorders will get you cleaner results. The fan noise is barely perceptible but loud enough to be picked up by the on-camera mic if in a quiet environment. It was not a problem when we tested off-camera mics. The speaker is adjustable while in playback and is loud enough to be heard in a moderately noisy environment.
Field Notes
We took plenty of notes while shooting with the Blackmagic Cinema Camera. As of firmware version 1.2, here are the more important notes:
There is no way of knowing how much room you have left on your SSD. The far too small "SSD Ready" indicator will flash when the disc is approaching its capacity, but there is no incremental indication.
The non-interchangeable battery was not the problem early users had noted since we had an external battery from Switronix, the PB70-BMCC, this Powerbase-70 kept us powered for several hours of intermittent use.â©In film mode, the iris button automatically sets exposure to ensure none of the scene highlights get clipped and it does a good job. Sometimes too good. We used the manual iris controls and 100 percent zebra levels to give a little more exposure to several scenes where it was acceptable to clip small areas in favor of better overall exposure. A histogram would be a very welcome feature.

You have to focus manually with the Blackmagic Cinema Camera but we found we could get good focus by using the button-controlled peaking feature and by double tapping the touch screen to get a quick 1:1 zoom.
Because the sensor is only 15.81mm x 8.88mm, we found our depth of field was less pronounced than a full-frame DSLR. The ISO selections are limited but adequate as are color temperature settings and if you are shooting in RAW, these can be adjusted in post. At 1600 ISO the peaking feature is not as noticeable.
We did not have an SDI-compatible field monitor so we had to resort to playback reviews of each take. We had difficulty viewing the image due to the touch screen’s reflective surface. Even with the sun hood attached we sometimes had a tough time confirming focus and framing when too much sunlight hit the screen and it only got worse as it got dirty. We found the old View Camera trick of using a towel over our head and camera worked well, but it felt a little retro.
We noticed that the Blackmagic Cinema Camera does not have a traditional video camera shutter. It uses the cinema camera standard of degrees of shutter instead of the familiar fractional seconds, so 180-degrees is approximately the same as 1/48th of a second at 24fps.
Rethinking Workflow
To get the most out of this camera you'll need to rework the way you've shot and edited in the past. In fact, not only does this camera give you images that rival those shot on film, the actual workflow can be quite similar. If shooting RAW, you will likely need both a more powerful computer and graphics card and more hard drive space. Shooting 24p RAW uses about 5MB per frame so you'll fill up a 256GB 2.5-inch SSD in about 30 minutes. ProRes and DNxHD will fit about five times as much data onto the same disk. If you are serious about your backup strategy you will have a complete onsite and offsite copy so you can see how the terabytes can add up fast. A note of caution; you may be tempted to save space on your hard drive by cutting out wasted DNGs at the beginning of each take but doing so will cause your audio to no longer be in sync.
For our workflow test, we transferred the files from the camera's SSD using an external SATA drive reader to our PC. We then opened DaVinci Resolve and imported our files. We applied the stock BMCC REC709 LUT and made basic adjustments. We then output our files as 1920x1080p CineForm RGB files and edited and output within Adobe Premiere Pro. If you wanted to maintain the highest quality you could use a more compressed format as a proxy, do your editing, then import back into DaVinci Resolve as an XML for conforming, final grading and output.