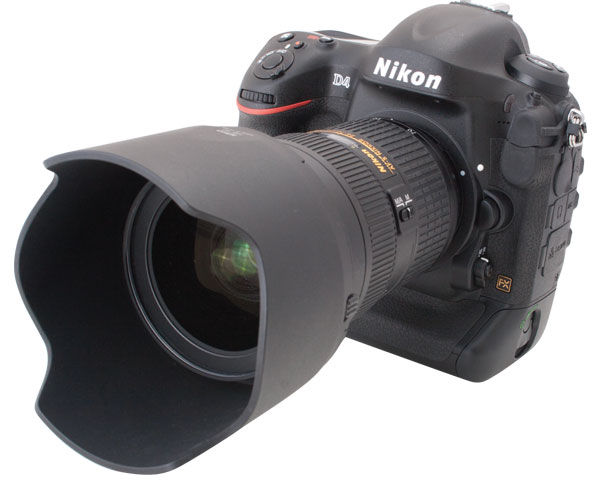 "Professional" is a wily word to define. In some cases, you might be hard pressed to tell the difference between the capabilities of a prosumer and professional camera on the market today. However, it's hard to miss the difference in a DSLR. With it's flagship camera, the D4, Nikon is hoping to show both the photo and video world what "professional" really means.

Let's be honest. Though we all love the incredible film-like quality of DSLR video, it was originally designed to do one thing first: take pictures. That's why Nikon included a 16 megapixel (MP) sensor that's able to capture photos at 4,928 pixels wide by 3,280 pixels tall. Though the MP count is not as high as Nikon's more affordable D800 (which can shoot at a whopping 36MP), it does give each pixel more room on the sensor which results in cleaner, less noisy pictures in low light. This is what made the D4's predecessor, the D3 such an overnight sensation. It could capture usable photos and video at such high ISO levels that the camera was practically able to see in the dark – a fact proven by Vincent Munier's Summer Variations video.

A lower megapixel count isn't the only reason why the D4's sensor does so well in low light. At 36×23.9mm, the D4's sensor gives each pixel plenty of light data to choose from without the typical pixel light leaks common to smaller sensors. In addition, the large sensor size also results in a shallower focus area giving us the ability to keep the attention on our subject while keeping the background safely out of focus. This is one of the biggest features that originally made DSLR videography so attractive to professional cinematographers. By allowing selective focus, cinematographers could effectively direct viewers' eyes to the important parts of the frame, making their story easier to tell. With benefits like these, it's easy to see why both videographers and photographers both pay a premium price for cameras like this and pay with a smile on their face.

As usual, Nikon has also included the ability to shoot in multiple formats with the D4. For shooters worried about saving space, Nikon has a JPEG option. For shooters looking for quality the NEF (RAW) option is the best bet. To be sure, the NEF option will end up hogging quite a bit of card space but it comes with the extremely useful benefit of being able to retouch almost everything about the image in post. As a result, it's going to be worth the extra cost of buying a high capacity memory card in order to allow for more recording time and picture quality. After all, no one regrets having more options to work with in post-production. In recognition of this, we tested the SanDisk 128GB CF with the D4. The card allowed us to not only capture several 20-minute full quality HD videos with its read/write speeds of 100 megabytes per second, it also allowed us to capture more than 3,000 full-quality NEF photos of a solar eclipse without a glitch – something that would have taken several cards and constant monitoring to do with a lesser capacity. 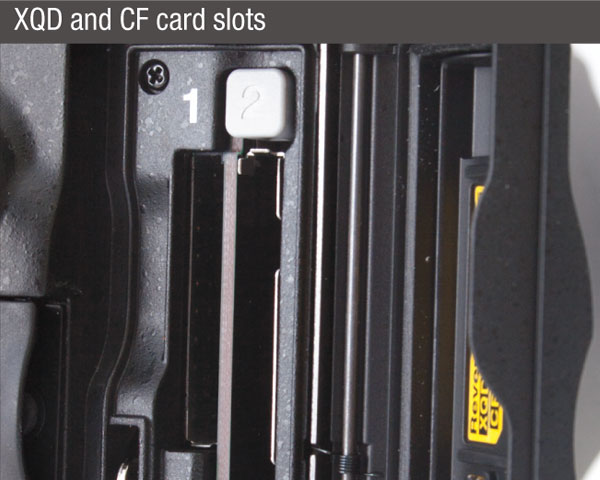 Speaking of cards, Nikon's taken a page from the success of both its D800 and D3S by including dual card slots on the D4. This not only allows you to write backup images to one card while shooting with the other, but it also allows you to use the size of both cards in tandem. In an unexpected effort to predict future recording mediums, Nikon chose to make one of the card slots in the new XQD format. This choice seems a bit odd as CF cards are nearly as fast as XQD and are often more reliable and affordable as of this writing. Even so, as more XQD cards make it to the market, it seems inevitable that both the price of the cards as well as the speed will become very attractive. 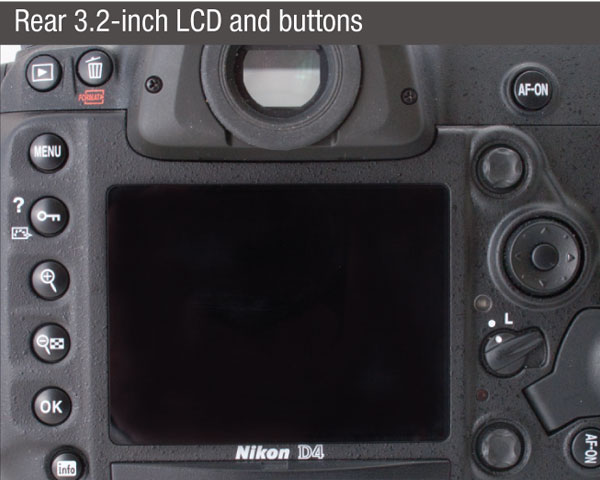 One thing that really separates the D4 from Nikon's less expensive models is its design. The camera not only looks great but also feels great even when shooting for hours on end. Admittedly, the camera did start to feel a little heavy when using larger lenses, but its well-designed hand grips offset most of the discomfort of the weight. We also enjoyed the bevy of external buttons the D4 has. In fact, the buttons were so handy that we almost never found ourselves using the menu. Plus, by having every major function (and even minor ones) so close and convenient, we found that we were able to keep prep time for each shot to an absolute minimum.

The D4 also has a dedicated video record button that should be convenient for videographers, an auto exposure and auto focus lock button, and several responsive joysticks for thumbing through pictures and focus areas on the D4's crisp 3.2-inch screen. Any camera worthy to be called professional also has a dial for changing both the aperture and shutter speed and the D4 is no exception. It has a front dial that controls aperture and a back dial that allows you to change the shutter speed in easy to access locations.

Of all of these features though, we were surprised at how useful the backlit buttons were on the D4 especially when shooting at night. Unlike most DSLRs, almost all of the buttons light up allowing you to see where each button on the back of the camera lies.

Though we mentioned how undervalued the built-in timelapse feature was in our Nikon D800 review, we feel it's worth mentioning again for the D4. Most cameras require external shutter controls in order to set up timelapses which not only requires more gear but more money. So it's a welcome reprieve to be able to take as many as 999 photos during a period of days, hours, or seconds merely through the D4's menu system. 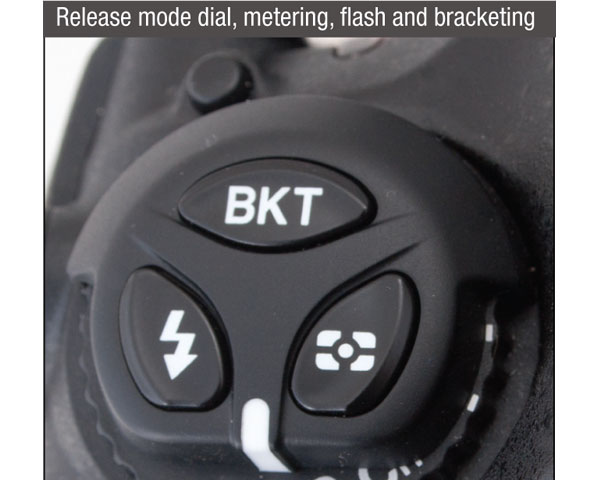 When DSLR manufacturers first announced that they would be including video in their cameras, many cinematographers breathed in a huge sigh of relief. Finally, it was possible to get the kind of shallow depth of field and image clarity that photographers had been benefiting from for years. Fast forward to today and DSLRs have arguably shifted the paradigm of what can be affordably achieved in videography. However, for as much as DSLRs have done to further the possibilities of the average videographer, there are still a few drawbacks. Sound has always been less than ideal and hard to control, heavy video compression has led to moir and rolling shutter, and even the shape of the camera has made it difficult to shoot in a traditional video camera style.

These are issues Nikon seemed well aware of when designing the D4. Though it keeps the standard lossy H.264/MPEG-4 codec, it goes a step further than most cameras by allowing an uncompressed video feed via HDMI. Doing so gives serious videographers the chance to record a much higher quality image to match their editing format with an external recording device. We decided to test this feature by recording video via HDMI to an Atomos Ninja. We found the resulting video to be more flexible when applying color correction though it was admittedly hard to see the difference in the quality of the video. Nonetheless, this is an incredible feature for green screen productions as the color space coming out of HDMI is much higher which should result in cleaner keys.

Uncompressed recording is a great feature but Nikon decided to go even further. Once again, they've proven their excellence in audio recording by including manual audio controls and more importantly, a graphical representation of volume levels on the LCD screen. They even went as far as to include a button that allows you to change the volume of your input and another button that can change the volume of the headphones all while recording video. After putting up with limited audio controls with other DSLR cameras for years, this is a real feature to celebrate. For some shooters, this feature may even make the camera worth the steep $6,000 price tag. It also finally makes recording audio on a DSLR a real option to consider.

In addition, the D4 includes a feature that allows you to use different parts of the sensor when recording video. This means that you can effectively turn an 85mm lens into a 100mm lens without having to purchase another expensive piece of glass. All this can be done as a result of the crop factor that is created when only using a small part of the sensor. Even better yet is the fact that you don't lose any resolution when shooting in cropped mode.

What does come as a surprise is it's ability to transfer files via FTP using an Ethernet jack on the side of the camera. The Ethernet jack also makes it possible to type in an assigned IP address so that you can control the D4 via a Web interface. We found the Web software to be easy to use and full of potential. For instance, it's possible to take photos using the program, pop the camera into Live View, and change aperture and shutter speed with the click of your mouse. In addition, by connecting several D4s to a router and a computer, you can also take photos with all of the cameras simultaneously, making for some interesting creative possibilities.

They say lightning doesn't strike the same place twice. Well, Nikon has defied the laws of nature by doing just that with the D4. Though they had an already near-perfect camera in the D800, Nikon conjured up an even more solidly built, longer-lasting, and responsive camera that will give sports and wedding videographers an easy way to capture their next masterpiece.

With Web-based control, uncompressed video output over HDMI, and full frame sensor, the D4 has every feature that serious-minded sports and wedding photographers and videographers need.