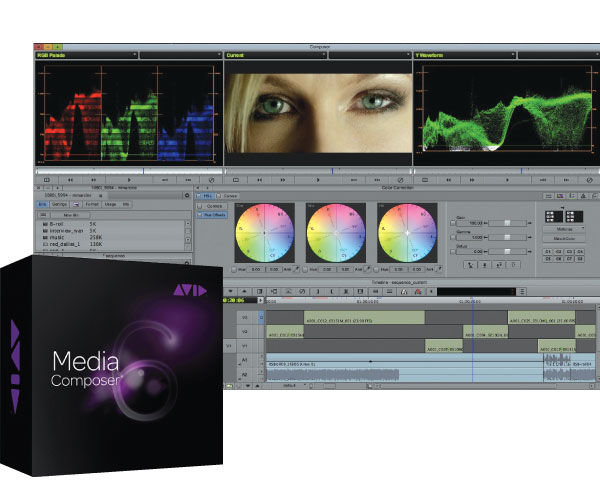 Long respected in the video and film community, Avid is not willing to rest on its past laurels but is fully focused on not only remaining a strong force in today’s production environment but is pressing forward in its quest to capture an even greater share of the marketplace. Even though the company has, to date, earned 14 Emmys, a Grammy and two Oscars it has given every indication that it intends to grow with the times, listen to its users and continue to deliver one of the finest editing systems available. Hot on the heels of its 5.5 update, Avid has now released Media Composer 6. Sporting a fair number of improvements and innovations, this latest version promises to pick up more than a few converts from the editing masses.

Updating the look and feel of any graphical user interface (GUI) can be a touchy proposition filled with potential pitfalls. It’s a delicate balancing act between creating a welcoming environment for the newcomer while not alienating the long time user. The folks at Avid seem to have done a fine job in this regard. Coming from an Adobe Premiere background, the Avid GUI is different yet similar at the same time. For instance, the interface brightness and color can now be adjusted from a very light gray to very dark, almost black, which some find to be much easier on the eyes after many hours of staring at the computer monitor.

Multiple bins can be opened at any given time and may now be tabbed together. A great space saver, simply grab any bin by its tab and drop it onto another bin window. It instantly appears as a tab in the new window. All your bins are now in one location and easily navigated by clicking the appropriate tab. Want to rearrange your tabs? Just drag them to where you want them and release.

While the new interface may provide some familiar creature comforts to users of other editing programs, it is still an Avid software – and to help make that transition, Avid provides some very helpful instructional videos on their website to help even the most staunch Premiere or Final Cut Pro practitioner get up to speed in no time.

Media Composer 6 features a new 64-bit architecture resulting in much improved performance. 64-bit means access to more RAM, making sluggish performance a thing of the past. Working with large bins full of HD footage, effects layering, render times and playback are now crisp and responsive in comparison to the previous 32-bit version.

Final Cut Pro users wishing to migrate away from FCP X will be happy to see Media Composer’s full support of their existing ProRes workflow on the Mac. The ProRes codecs are all there, as well as expanded support for the RED and AVCHD formats.

Avid’s appeal to Final Cut Pro and other users is even greater with their Avid Open I/O initiative, which incorporates and supports hardware from vendors like AJA Video Systems, Blackmagic Design, Matrox, BlueFish444 and MOTU. No longer do you have to run out and purchase a Nitris DX or Mojo DX video interface in order to work with Avid. Media Composer 6 can now be incorporated into your entire workflow – using your hardware. This list of vendors is likely to grow as manufacturers now have the ability to use the Avid Open I/O initiative to create plug-ins that will allow their devices to work with Media Composer 6.

Working with 3D footage in Media Composer 6 is a joy. Setting up and formatting a 3D project was quite easy (with the assistance of the aforementioned instructional videos). From beginning to end, Avid has developed and incorporated a well thought out stereoscopic workflow. Easy to import, easy to work with – even 2D and 3D footage together – and the use of a full editing toolset and effects made short work of our test edits.

Another very innovative time saver integrated into Media Composer 6 is the marketplace. How many times have you needed a particular piece of stock footage and spent loads of time tracking it down, checking – and double-checking – the licensing and finally making the purchase? The marketplace turns all that drudgery into a simple, pain-free task by giving you direct access to audio and video plug-ins, media libraries, training and more. Through a partnership with Thought Equity Motion, the marketplace portal lets you quickly sort through lots of stock media. You can view and organize clips online before downloading them. Once you have completed your search, proxy clips – or comps – are added to your project via Avid Media Access (AMA). Drop them onto your timeline and edit as you would your usual assets. When the edit is complete, the software can generate a stock footage report. This report details which footage, and how much of each, was used. This report is then used in the final purchase of the high-resolution versions. Once downloaded, Media Composer 6 will automatically link them to your timeline and replace the proxies with them for you. Pretty slick, huh?

Additionally, Avid has included a suite of production tools for added functionality. The suite consists of Avid FX (Boris RED) for titles, animation and special effects work; Sorenson Squeeze, an advanced encoding tool and Avid DVD for DVD and Blu-ray disc authoring. Both Avid FX and Sorenson Squeeze may be used on either a PC or a Mac while Avid DVD is for Windows use only.

Avid seems to have successfully taken an already well-known and highly respected editing system and cranked it up a few notches. With its new 64-bit architecture for improved speed, end-to-end, ProRes support, Open I/O for third-party hardware integration, a great 3D workflow, easier media acquisition through the marketplace and a couple thousand dollars worth of production tools thrown in to boot, Avid has shown its commitment to its users and its intention to maintain its position at the pinnacle of the video and film production world.

Anyone who has worked with Avid knows it takes a lot of processing and a standard capture card might struggle to keep up. Many Avid editors enhance that with added power under the hood. We tested our Media Composer 6 review using the AJA KONA 3G card. Real-time previews were actually real time, which sped up the workflow considerably. Users can expect solid capture with virtually no dropped frames. A plethora of I/Os meet pretty much any connectivity requirement. While we would like to see greater H.264 support, the KONA 3G is an outstanding card and though might be beyond the reach and needs of some of our readership (about $2,000) it will be quite at home in any high-end production environment.