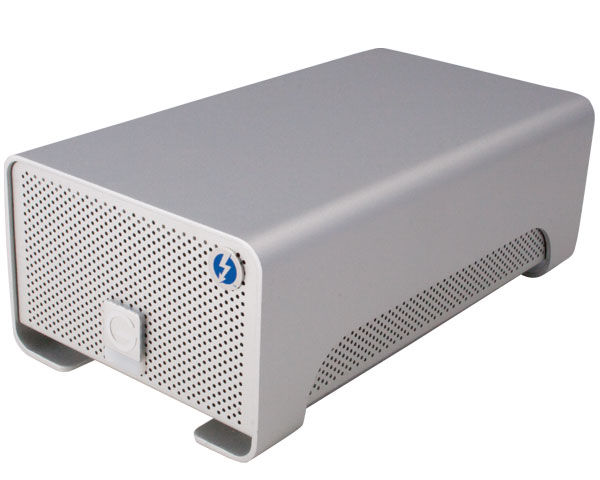 When Intel’s Thunderbolt technology first started shipping on Apple’s flagship desktops and notebooks, video professionals were anxious to start using storage devices that used the lightning-fast connection, which at 10 gigabits per second, is twice as fast as USB 3.0. It’s been a long time coming, but Thunderbolt products are finally spreading into the market, and one of the highlights is the G-RAID with Thunderbolt storage device by G-Technology. This storage system gives video professionals an affordable, yet very capable RAID storage system that is fast and simple to use right out of the box.

Speaking of the box, inside you will find the G-RAID enclosure, a power adapter, and a brief Quick Start Install Guide. No software is included as all the necessary drivers are included with Mac OS X.

When looking at the G-RAID enclosure, it becomes very apparent that the design was heavily influenced by Apple’s own design practices. The G-RAID device itself is beautifully assembled out of solid aluminum, weighs about five pounds, and is about double the size of a standard 3.5-inch external hard drive enclosure. The G-Technology logo is prominently displayed on the front of the drive and glows brightly while the drive is powered. The back of the G-RAID provides a power switch, a port for the external power supply, and two Thunderbolt ports for connecting to your computer and daisy chaining additional Thunderbolt devices, like more hard drives or an extra monitor. The G-RAID with Thunderbolt is available in three storage sizes: 4TB and 8TB (our review model), and both models use the same enclosure. It is made with a RAID 0 configuration of the two drives inside the enclosure. While the RAID 0 configuration allows for faster read/write speeds, it also creates a data security risk in that if one of the two hard drives fail, you will lose all the data that was stored across both drives. For this reason, we would go for a second unit for backup purposes, or use other hard drives to back up important data.

One thing that is very surprising is that a Thunderbolt cable was not included in box. This is something that is sure to be a disappointment for buyers who don’t read the fine print and neglect to order a cable separately from Apple, which at $49 per cable isn’t exactly a bargain. The drive features few total ports and gets versatility out of it with the Thunderbolt cable. 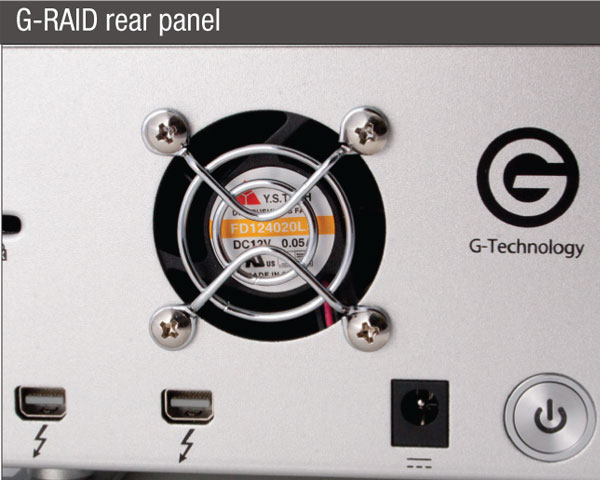 Upon connecting the Thunderbolt cable to an Apple 17-inch MacBook Pro (early 2011 model) running Mac OS X Lion and flipping the power switch, the 8TB drive immediately mounted on the desktop with zero setup or configuration required. The G-RAID comes pre-configured as a large RAID 0 partition so you can start working with it immediately. For our first speed test, we took a single 1GB H.264 video file and held our breath as we started it copying to the G-RAID storage system… The file was copied in a mere eight seconds, or approximately 125MB/s! We then attempted to stream the file off the drive directly, which worked perfectly with no hiccups or dropped frames. We then transferred a 2GB ProRes 422 HQ file through the Thunderbolt to the G-RAID and attempted to open and stream it straight from the drive. Again, the drive performed flawlessly, causing no visible stutters or pauses.

Now, 125MB/s is nothing to sneeze at, but if this sounds like the Thunderbolt interface doesn’t live up to the advertised speeds – it is important to remember that the files were being copied from an internal 5400 RPM notebook drive which is slower than most desktop system hard drives. To rule out the notebook hard drive as the bottleneck, we tested the G-RAID storage system using Blackmagic’s Disk Speed Test application. The results were shocking, to say the least. The tests showed write speeds topping out at an astonishing 309.7MB/s and read speeds up to 316.3MB/s, a huge leap ahead of the 125MB/s we saw using the real-world copy and streaming tests. The Blackmagic test shows the true potential for the G-RAID storage system and just how fast Thunderbolt can be when connected to a system with internal hard drives that can keep up with it.

After using the G-RAID with Thunderbolt storage system, I can safely say that it is the fastest external drive I have ever tested, even with the speed bottlenecks you may run into if you use a slower, notebook hard drive. The G-RAID is a breeze to set up and put away, although it can get a bit heavy if you are thinking about carrying it around with you. Also, while the RAID 0 configuration of the two hard drives inside provides the best speeds, it also could be disastrous if one of the two drives should fail. Opting to configure the G-RAID to RAID 1 will mirror the two drives for data protection, but the performance may not be as exceptional. Even so, the G-RAID with Thunderbolt is still a well designed and well performing storage system and we would love to edit with it if we used a computer with Thunderbolt capabilities. Video needs demand massive amounts of storage for working with high bitrate video files.

The G-RAID is a solid hard drive that can speed up your workflow and keep it simple at the same time.