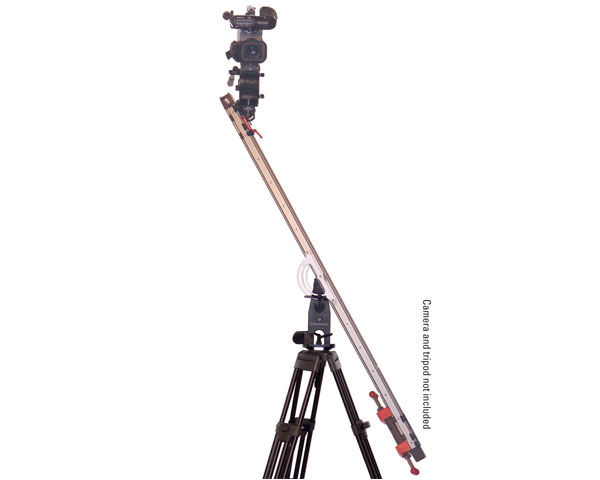 With thousands of years of human history to draw from and more than seven billion people in the world, it seems tougher than ever to come up with an idea that’s truly innovative. The same is true for camera gear. We’ve had the basic jib arm, dolly, stand, tripod, and stabilizing devices forever without anything more than a mere cost improvement to satiate our expanding appetites. Even with all of these obstacles, the people at Matthews decided to take this challenge head-on by releasing its newest product, the DC-Slider. This is the first camera support to operate as not only a vertical and horizontal dolly, but as a jib arm as well. Of course not every new idea is a good one (remember New Coke?) so lets take a look at the product to see if it deserves the attention it has received.

Let’s face it – no one wants to bring cheap looking equipment to a shoot. Not only is it embarrassing to use with a client, but cheap equipment is also likely to cost you more in repair and frustration than the money you’ll save. After testing their equipment we found that cheap-build is the last thing that Matthews Studio Equipment has in mind. This is probably due to their years of experience in designing high quality grip and camera equipment for the professional world. The DC-Slider is made with sturdy aluminum and composite material that should be able to handle years of use. We also found that the slider’s lock handles were large, easy on the hands, and held the dolly platform incredibly well. Surprisingly, even details as small as the band that pulls the counterweight was of a solid design. Of course the sturdiness of the design does come with a price. The DC-Slider weighs almost 26lbs. alone and almost 60lbs. with an appropriate tripod and camcorder attached. This means that the slider probably won’t see a heavy amount of field use since most shooters tend to shy away from lugging around equipment that weighs as much as a small child. Even if you end up keeping the slider in a studio environment, we found it would be wise to get a set of tripod wheels in order to save money on visits to the chiropractor. Nonetheless, we feel that its sturdiness far surpasses any inconveniences the weight may have.

One thing we really loved about the DC-Slider was the length of the rail system. It has a tracking length of 63 inches which allows us to perform much faster trucking movements than with any other popular slider on the market. At the same time, though, we found the length to be both a blessing and a curse. Since there is no way to break down the length of the rail, it requires a 76-inch case just to pack it for the road. This means you need a van or truck to haul the sliding system around. Even so, we found that in shooting environments that don’t require a lot of packing up and moving around, the DC-Slider would be a great addition to any shooter’s arsenal.

In the world of video production, just about every producer is looking for a way to keep costs down while also having the kind of equipment that makes shooting a masterpiece both possible and efficient. That’s what makes the DC-Slider so appealing. It takes both of these ideas and combines them into a single piece of equipment. Instead of having to set up a dolly, jib arm, and tripod on a set, the DC-Slider can do the job of all three – undoubtedly making both crew and producers happy.

A benefit of its counter-balanced design and adjustable locking fulcrum is the ability for the rail to be at any angle while achieving incredibly smooth movements. We tested the slider in quite a number of positions ranging from flat, to 30 degrees, to nearly 180 degrees vertical. No matter what the position, we found the movement of the camera along the track to be smooth and consistent. We even left the camera at the top end of the rail without having to lock down the platform which made the slider very safe and convenient to use.

In addition to being able to dolly at any angle, the DC-Slider can also be mounted vertically to a tripod. In order to do this, we had to mount a pair of “ears” to the fulcrum in order to give the rail clearance next to the tripod as well as attaching a foot piece so that the bottom of the rail could rest safely on the ground. Though this sounds easy, the weight of the rail system made it difficult to mount vertically without a decent amount of effort. Having a grip assist on productions using the DC-Slider will probably be a real time saver.

Once we got our unit in the vertical position, we found that the camera and weights needed to be slightly adjusted since having the two balanced was critical to achieving smooth moves. After completing that, we were pretty pleased with how easy it was to get good looking shots. It only took the slightest touch to get the camera moving up or down along the rail giving us plenty of control.

The most talked about feature of the DC-Slider is its ability to be used as a jib arm. By locking down the platform at one end of the rail and attaching a parallelogram arm, the DC-Slider can quickly be turned into a mini jib arm. The parallelogram arm keeps the camera platform level throughout the jib movement so that you can keep a person framed correctly. Surprisingly, we found that the length of the jib arm was more than enough for many of the shots we needed, though to be honest, we did sometimes find ourselves wishing for a bit more. In addition, the smoothness of the jib movement on the fulcrum was as good as any jib arm we’ve ever tested, if not better. Overall, we found the jib to be a useful feature so long as you’ll be keeping your jib shots rather simple. The DC-Slider is no replacement for a real jib arm but it can achieve the same kind of short and subtle shots that slider dollies are famous for.

Of course, at the end of the day the only thing that matters about a camera support is if it can help you make your shots look smooth and professional. If nothing else, this is absolutely true of the DC-Slider. In fact, it might just have been the smoothest system we’ve ever used. This probably had a lot to do with the slider’s counterweight and excellent build quality.

If you’ve ever used a slider system before, you know how much bending can happen when moving the camera from side to side along the rail. Matthews avoided this flaw by designing a counterweight system that rolls silently along the bottom of the rail system. This weight system allows the rail to stay level throughout the sliding movement since the weights automatically move in the opposite direction of the camera, keeping the pull the same on both sides of the tripod. To do this, Matthews had to include a center fulcrum that is tall enough so that the weights can clear obstacles below it. Also, by having a bevy of individual weights in increments of one, two, and five pounds available, they made it possible to balance any camera weighing up to 22lbs. perfectly.

If you don’t trust your own hands to perform smooth trucking movements, Matthews also included a crank handle that attaches to one end of the rail. This crank allows your move to be hands-free, which can help get rid of shake when accidentally bumping the camera. Better yet, Matthews has also announced an optional servo motor that can be attached to the crank for even smoother movements or for timelapse shooting which should make your moves even smoother.

The Matthews DC-Slider is not only strong but one of the most innovative and versatile pieces of equipment that we’ve seen in a while. Though you’ll likely have to dig deep into your wallet to purchase one, the DC-Slider is still a great addition to any professional set that desires every dolly move to be smooth and professional.

With its clever versatility, counterbalance system, and sturdy design, the Matthews DC-Slider is a fun and useful tool that will help cinematographers keep their shots looking both dynamic and professional.