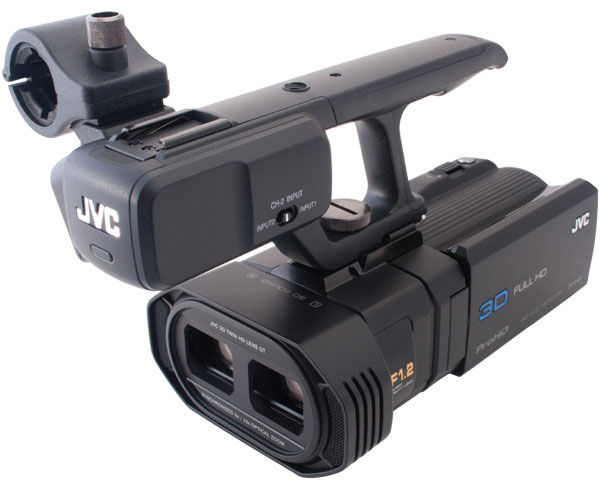 Visual depth is a useful part of human life. Even so, depth hasn’t traditionally played a large part in either home movies or films. However, with James Cameron’s release of his hit movie Avatar, depth made a spectacular comeback. Typically, 3D cameras were equipped with bulky converters that required either a stout operator or a sturdy tripod to manage, which made shooting more of a chore than it needed to be. So when camcorders began to combine two lenses and sensors into one small package, they came as a welcome relief. One of those camcorders, JVC’s GY-HMZ1U, is aiming to not only keep a camera operator’s load easy to bear, but to make capturing great images easy as well. 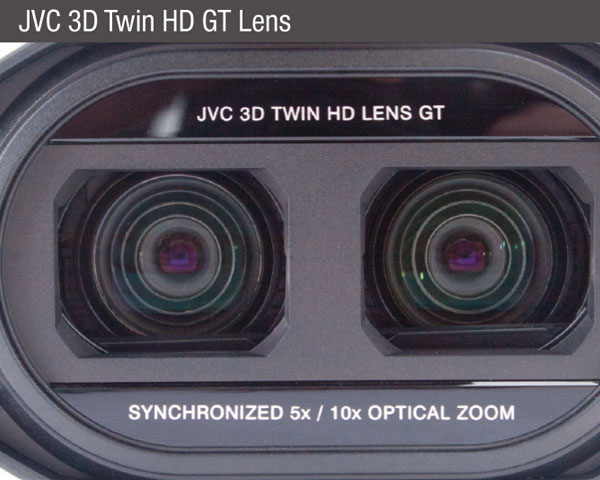 The camcorder body is made of a high-quality composite that feels more than ready for a tough life on the road. The body is actually fairly small weighing in at only 2.2 pounds and measuring a little more than five inches wide by six inches tall (with handle) and nine inches deep. This, along with its dual lens design, made the entire camcorder body shaped like one big rectangle. Interestingly enough, we found that this actually made the camera easier to carry since a person’s entire hand was easily able to get around three of the camcorder’s sides.

Speaking of the lens, JVC was thoughtful enough to include the ability to open the aperture to an f-stop of 1.2. This means that the lens is able to allow enough light into the camcorder for even dark scenes to look good. The lens also includes a zoom ability for getting that extra bit of detail on run-and-gun style shots. The optical zoom can achieve 10X in 2D mode, but is only able to get up to 5X in 3D mode. However, this doesn’t affect the usability of the camcorder much as zooming in 3D often lessens the effect of depth.

Taking a look at the back of the camcorder, JVC includes several buttons to make shooting in 3D a rather convenient experience. The most noticeable is the large 3D button for switching the camcorder from 3D mode to 2D mode. This button made it easy to quickly switch back and forth by being located in a place where our thumb naturally rested on the back of the camcorder. It also allowed us to see when the camera was in 3D mode by having an illuminated LED ring around the button. In addition, the back houses buttons for switching from automatic to manual mode, another button for switching between stills and video, an assignable user button, an info button, and a button to adjust the level of depth in the scene using a small, yet convenient dial right next to it. The record button is also located on the back of the camera, however we found its position to be a bit too close to the edge. This made it tough for our thumb to press when using the handgrip along the side. The camera also includes HDMI (mini) output, 3.5 mm headphone jack, and a DC input on the back of the camera as well as a 3.5mm microphone input and composite output, USB output, and a slot for an SD card located on the inside of the camera’s LCD screen.

On the right side of the camcorder, JVC includes a switch to shutter the lens in order to eliminate dust and scratches, and a cover, which gives access to the camera’s battery. We were surprised at just how much room the battery takes up in the camera and how little space is left for the lens, sensors, and various other controls. Having the battery on the inside of the camcorder meant that the 2,190 mAh battery is not upgradeable which is bad news for those looking to use this camera for live events.

One of the most useful parts of the GY-HMZ1U was the detachable handle that featured two XLR inputs for professional microphone use. Unfortunately, since the handle connects via a 3.5mm jack on the camcorder, the XLR inputs were not phantom powered. Nonetheless, the handle proved to be very useful when shooting low shots and for connecting more than one microphone to the camera. The other interesting part about the handle was that it made the camcorder especially front-heavy. Though this became a strain after long periods of shooting, the lightness of the camcorder made this flaw tolerable.

With a distinct lack of 3D monitors on the market today, it’s more important than ever for a camcorder’s LCD panel to display a great picture. JVC went with a large 3.5-inch autostereoscopic, touch panel display. We enjoyed not having to put on glasses to see in 3D, but we did find that there were only about four distinct areas where our eyes could actually view 3D playback. This led to eye fatigue setting in earlier than usual with this camcorder. One nice part about the display is that it was sharp and bright in 2D mode. However, as soon as the camera was switched into 3D mode the display and resolution lessened considerably. It was actually possible to see black dots between pixels. We also found it difficult to see the display when used outdoors due to its lack of brightness. We were also a bit disappointed to find that the zebra stripes only worked in 2D mode, which made finding the right brightness level even more difficult to determine. But it was possible to shoot 3D footage while viewing the real time playback in 2D. Though there are some places where viewing your image in 3D will be appropriate, you’ll probably find the 2D option works best. 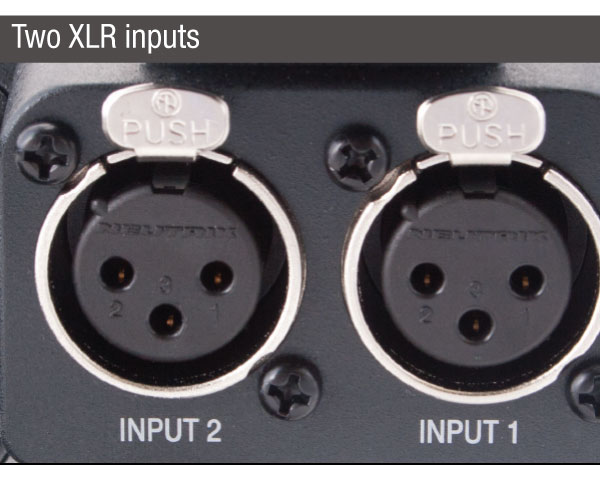 Of course, the most important part of any video camera is the kind of images it can produce. The camcorder can record images at a resolution of 1920 x1080 in both 60i for fast motion images and 24p for that coveted “cinematic” feel.

One of the best parts about this camera is that it houses two -inch back-illuminated sensors, which can produce two separate 1920 x 1080 images. The back-illuminated sensors allow more light to be recorded to the camera’s sensor without producing grain, adding to an already great low light image. However, this can only be recorded using the newly developed MPEG-4 MVC codec. If you choose to use AVCHD, the camera will record two squished images at 960 x 1080, which means you’ll be sacrificing quality in order to get smaller file sizes and a file that can be played directly on 3D capable televisions.

We were rather impressed by the amount of depth that the camcorder was able to produce in its 3D image. When played back, the 3D looked quite convincing and had a surprising amount of color and detail. We did notice that the contrast was a bit high in the image, but not to the degree where our footage was unusable. The sensor also held up well during quick panning. There was only the slightest hint of rolling shutter skew, which is all you can ask for when dealing with CMOS technology. Overall, we were very happy with the images the camera was able to produce especially since 3D technology is still relatively new to cameras of this size.

Being one of the first professional 3D camcorders on the market can be a risky business. Though there are some features that may take some getting used to when shooting in 3D, the JVC GY-HMZ1U is a worthy camcorder for a videographer’s 3D needs.

Weight: 2.2 lbs (with handle and battery)

Though 3D is still in its infancy, the JVC GY-HMZ1U gets a lot right. It’s portable size, professional features, and dual full HD recording makes this camcorder worth thinking about for anyone considering the switch to 3D.