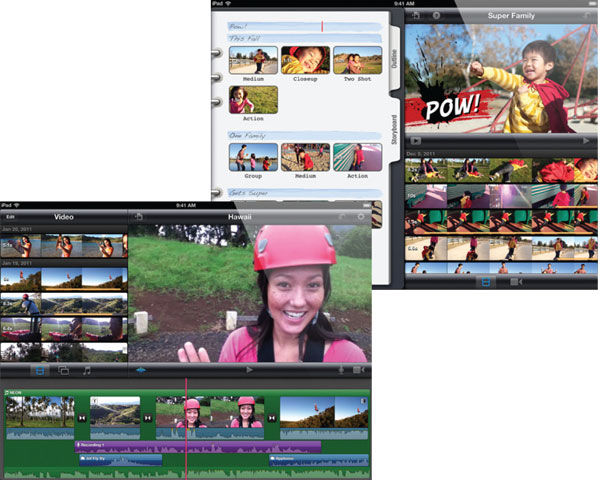 These days, mobile apps and even software can be difficult to review. Mobile apps tend to be perpetually updated rather than having big updates sold as a new release. So, please be aware of the publication date of this review, as iMovie may be drastically different later on down the road.

That said, we had a lot of fun with iMovie, and for most video enthusiasts, that’s about all you should expect diving into software like this. You won’t be editing Jaws 5 on iMovie (actually, that would be pretty awesome). Rather, iMovie is perfect for when you’re recording footage of your family and want to edit it away from home. While not all the same tools are present, those that are, should suffice and are generally very easy to use.

When you launch the app for the first time, you’re greeted with a movie theater marquee and a wall of movie posters, each depicting a project that you’ve created. Swipe through the movie posters, and the marquee changes with them. To start a new project, touch the plus icon and you’re presented with two options: “New Project” and “New Trailer.”

This is the meat and potatoes of iMovie: the editing. The interface will look familiar to anyone with experience in Final Cut Pro X. This iMovie really looks like FCP’s little brother. You’ll find all your iPad’s files in the top left window, which contains tabs for video, stills, and audio. To the right is a single, large viewer window. On the bottom is the timeline, containing the colorful, mountainous, half-waveforms you’ve seen in Final Cut Pro X.

The iPad populates the video tab in the top left window with every video clip on the tablet, no matter how you have it organized in the Photos app. It’s not a big deal when you’re working with only a few video clips, but if you have dozens of clips, it’s going to get messy. It does list the thumbnails chronologically, with dividers between clips labeled with the clip’s shoot date.

Marking in and out points and inserting clips is simple, even if unsophisticated. Tapping a clip brings up handles in the top left and bottom right corners of the clip. Simply drag the handles to set where the in and out points should be (sorry, no defining timecode). Oddly, drag and drop isn’t the next step, as dragging will scrub a playhead across the clip. Rather, you tap the arrow icon that now points to the timeline. How iMovie adds your clip to the timeline is a little strange. It will decide what edit point on the timeline your playhead is closest to and do what appears to be a hybrid between an insert and overwrite edit. It will overwrite all video between your playhead and the next edit point, but will insert before everything that comes after that edit point. iMovie uses a standard dissolve as a default transition, so if your edit points are near the end of the clips, expect iMovie to adjust the in and out points to make room for the dissolve.

Once two clips are edited together, iMovie will put a small icon between them indicating what transition is being used. Double tapping the transition icon will give you transition options and duration. Your other transitions are cut (no transition), and the theme transition, which we’ll cover shortly. Tap the transition once and you’ll be presented with an up/down arrow graphic. Tapping that graphic shows you visually how the two clips overlap, and lets you adjust the in and out points with draggable handles.

Double tapping on a clip gives you the clip’s options: title styles, location tagging, volume, and a big red delete button. Unfortunately, this does mean that if you use titles, their durations are locked to clip length and since they aren’t on dedicated tracks, can’t span across multiple clips.

Adding stills is similar to adding video, but browsing your files is much easier. The stills browser shows your photos as you’ve organized them in the Photos app. Tapping a photo puts the photo on the timeline, where you can stretch or contract its duration. Tap the photo within the timeline and you can adjust the starting position, ending position and scale in the viewer. Doing so animates the photo for a duration giving you a really nice, and simple-to-achieve look.

Finally, the audio tab reflects an added theme music folder and sound effects folder. iMovie comes with a small handful of music tracks, as well as a rather large selection of sound effects. To apply a music track, tap on it, and the music will be applied to your project from the beginning to the end of the timeline. Unfortunately, you can only apply one music track.. The solution is anything but elegant. If you want to use two pieces of music, you’ll have to edit two separate projects, export them then use the exports as movie clips on a third project. Ugh!

Adding sound effects is also as simple as a single tap. The clip is dropped right at your playhead at full duration. Should you need to trim the in or out points, simply tap the clip on the timeline and you’ll be given handles on either side to drag in or out. You get three audio tracks to work with, in addition to your music track, so layering sound effects is a breeze. Unfortunately, adding your own sound effects isn’t so simple. iMovie treats all clips in iTunes as music, so if you try to import your own, you’ll end up replacing your music track with no control of its position and timing.

Fortunately, there is an audio record feature, so you can add your own voice over or custom sound effect that way. One feature here automatically ducks the music volume so voice overs. We wish Apple would let us disable this feature, however, because if you use your iPhone or iPad to record sound effects, ducking the music track might not be desirable.

A fun feature iMovie offers is their selection of themes. Each theme includes three title looks and animations; an opening graphic, lower third, and closing graphic. Additionally, each theme has music and a custom transition. While specific title animations are set, you don’t have to use that theme’s music track. We would have liked to have been able to mix and match the different themes’ titles and transitions, but unfortunately, once you pick your theme, you’re locked in.

If we jump out of our project to the main menu, we can try “New Trailer.” Trailers are a fun way of creating movie previews by combining pre-made storyboards and existing graphic templates. You can change the text of each graphic, but the overall look is locked down. The graphics and editing pace both look great. We found ourselves wishing we could get access to some of these graphics to use on our projects outside the trailer tool.

When starting a new trailer, you’re presented with a choice of nine different movie genres, all containing sample footage as inspiration. Choosing a genre will take you to an outline view, where you input the name of your movie and the credits. From there, move to the storyboard tab to see what shots you need to fill in. By tapping on a frame in the storyboard, you’re presented with all the footage on your iPad. A simple tap lets iMovie apply in and out points to that clip, then you can slide left and right to select the action. The editing is all done for you, and the in and out points are locked to specific durations. If you’re missing a shot, iMovie allows you apply freshly recorded video from your iPad.

The trailer feature is a lot of fun, and gives you a surprisingly polished movie trailer at the end of the process. Even though adults will get a kick out of it, making trailers in iMovie is great for kids looking to be filmmakers. Making a trailer will teach anyone new to videography how to read storyboards, direct actors, and understand pacing, even though much of the editing work is automatic.

Like most Apple consumer products, iMovie is relatively locked down in order to maintain ease of use. Experienced editors may feel restricted by how some of the features work. But, hey – it’s only five dollars. If you make a single trailer, it’ll have been worth the price. The amount of polish that’s in the graphics alone is worth five dollars. If you’re the kind of person that loves to take photos and videos to share with friends online or in person, you’re get a big kick out of iMovie.

iMovie for iPad may not be the most advanced or professional video editing software, but you’ll be hard pressed to find one more fun.