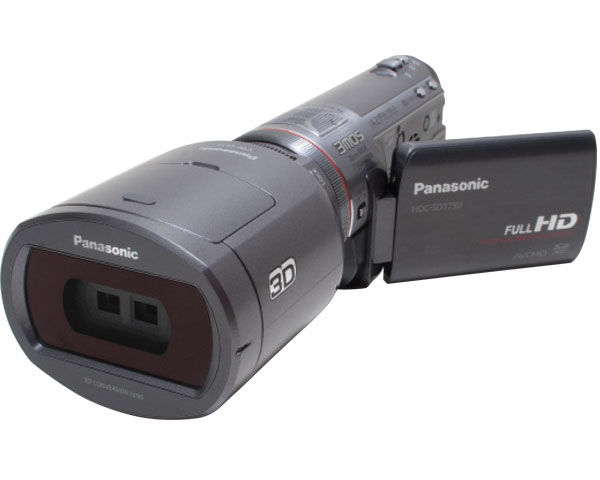 Panasonic drew first blood in the world of consumer 3D video production and definitely scores a few points. The HDC-SDT750 poses a dual threat as it is a very nice high-end camera that is equally capable of producing some impressive 3D footage as well.

The SDT750 arrives with everything you’ll need to capture great 2D and 3D footage, with one exception – no media card. This camera uses any number of SD, SDHC or SDXC cards in various capacities. You’ll need to use a card that has an SD Speed Class Rating of Class 4 or higher for optimal results. There is no internal memory so one of these cards is a necessity.

A CD-ROM is included that contains the HD Writer AE 2.6T software for transferring, editing and burning your video creations. 3D editing is very limited; titles and transitions are unavailable, with only “Delete Partially” and “Divide Scene” functions possible. 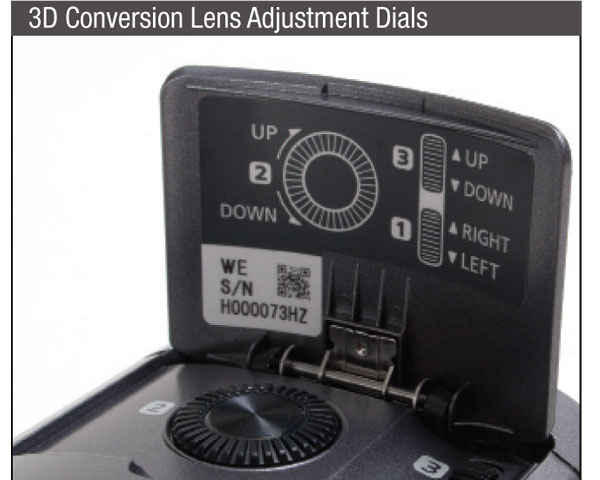 Most of the features and buttons are pretty standard small-format-camcorder fare. Beautiful images are achieved with the advanced 3MOS imaging system and 35mm wide angle (equivalent) Leica Dicomar lens. At the front of the camera is a very useful manual control ring which allows you to quickly adjust various selected functions such as focus, shutter speed, exposure and white balance. The SDT750 is also equipped with Hybrid Optical Image Stabilization (O.I.S.), which is a blending of both optical and electrical image stabilization.

5.1 channel audio is captured using five directional microphones located on top of the unit. There is a Focus Microphone function, which picks up sounds from directly in front of the camcorder and an 1/8-inch mini-jack is also included for external microphone use. 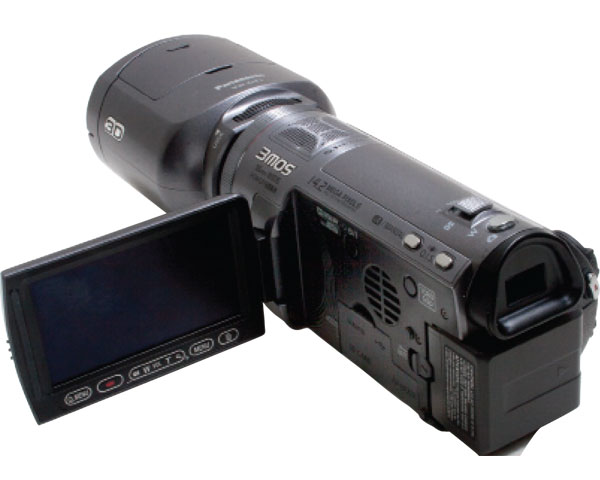 This camera’s most unique feature, however, is the 3D conversion lens which contains two individual lenses situated alongside one another. Almost as large as the camera itself, the odd-looking conversion lens attaches to the front of the camcorder via a pair of locating pins and a dial used to screw the lens in place. Once attached, the camera informs you that it is initializing for 3D then takes you step-by-step through the calibration process, which is very straightforward and simple to follow.

A flip up cover on top of the lens body hides three dials used to make the necessary adjustments. An image on the inside of the lens cap and a set of gridlines are lined up to make sure the settings are just right. Care must be taken to keep the camera and lens steady while calibrating. Pressure on the lens causes the calibration lines to change position, skewing the lines.

The individual lenses simultaneously record separate images for both the left and right eyes. The two images are recorded using the side-by-side method, which closely approximates the way in which human vision works, with each eye seeing a slightly different image. This difference is known as visual disparity and is how the brain perceives depth. According to Panasonic, “The SDT750 creates 3D images by artificially reproducing visual disparity.”

3D footage captured with the SDT750 is meant to be viewed on a TV or monitor capable of the side-by-side 3D playback method. Not having such a display available at the time of this review, another method was tried. Captured footage was uploaded to YouTube and given the tag – yt3d:enable=LR – to indicate that left/right 3D playback was to be enabled. We then donned our handy-dandy red/cyan glasses and Voilá! – we had 3D. Not Avatar 3D mind you, but honest-to-goodness, good quality, home brewed 3D.

It’s important to be aware that while the SDT750 is an excellent 2D camcorder and produces very nice 3D as well, it does have some limitations when in 3D mode. For instance, recording in the side-by-side method necessitates recording at a lower resolution – two 960 x 1080 images rather than one at 1920 x 1080. Also, no manual controls other than white balance may be used when the conversion lens is in place, including zoom.

Three things to keep in mind for optimal recording in 3D are: keep the camera as still as possible (preferably on a tripod), 3D results are best with objects 4 – 10 feet away and have plenty of light.

All in all, for a out-of-the-gate 3D camcorder with some quality imaging, this is a fun camera to use and experiment with.

Equally great 2D recording can be found for less money but if good quality 3D appeals to you then the HDC-SDT750 from Panasonic is certainly worth a look-see.